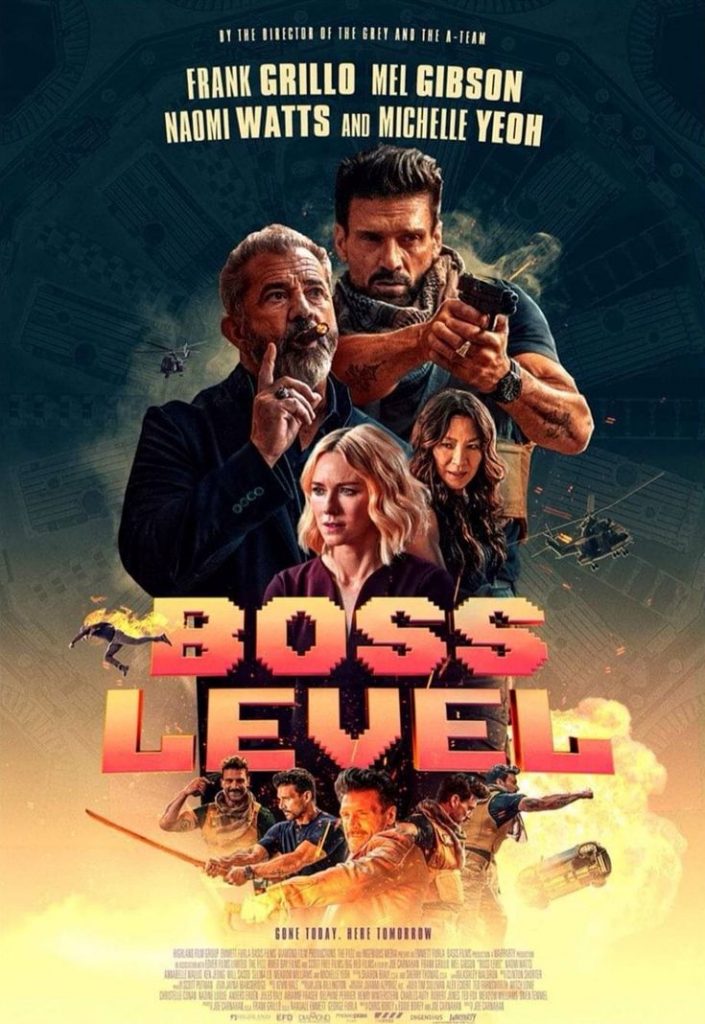 Every time he wakes up, Roy’s day begins the same way. The girl sleeping in his bed is murdered, a machete is buried into his headboard, and a helicopter loaded with a massive machine gun shoots holes through his apartment. He has figured out a way to survive for a bit longer, but he always ends up dying and living the same day over again. He has no idea why a group of skilled assassins wants him dead, but this is his life.

“It’s like being stuck in a video game at a level you can’t beat,” explains Roy as he’s taking us through his story at the beginning of the movie. It’s where the title of the film also comes from, that frustrating moment in the game that you can’t beat and end up throwing the controller through your brand new television as your family looks on in terror. (Ok, that hasn’t happened to me yet, but I have come close.)

Starring Frank Grillo, Naomi Watts, and Mel Gibson, the movie is an exhilarating character-driven thrill ride. The action is non-stop, but it takes time to give us real moments of humanity throughout, which is the reason we want Roy to succeed. We want him to find out why he’s marked for death, and most importantly, we want him to survive the day. A lot of that is also due to Grillo as the lead, who brings an unexpected amount of charm and sweetness to the role of Roy. The supporting cast is great as well, grounding the film as much as it can be amid the madness.

Boss Level is a chaotic, bloody, and violent take on the Groundhog Day formula. The story itself isn’t exactly original or genre-changing, but it’s a lot of fun and takes things up a notch. Director Joe Carnahan is known for bringing us movies like The Grey, Smokin’ Aces, and The A-Team, and this movie fits comfortably right beside those films. It is exactly the type of movie you would expect from him, and that’s a good thing. It is a solid action movie, and it’s on Hulu now.

Kevin Hoskinson is the Entertainment Editor at Pastrami Nation. A writer with a deep-seeded love for movies, comic books, television and the paranormal, he is also the host of Pastrami Nation: Popcorn on YouTube, Spotify, Apple Podcasts, SoundCloud and more. From humble beginnings working the box office at his local movie theater, he’s worked his way to becoming a humble family man and professional bug exterminator. Growing up, he wanted to become an astronaut, a Ghostbuster, a dinosaur, and a Disney animator before he found his passion for writing as a teen. He studied film at Los Angeles Valley College with an emphasis on screenwriting and film criticism. He currently lives in Portland, Oregon, with his wife and two kids. You can follow him on Facebook, Twitter @Kevin_Hoskinson, and Instagram @kevinhoskinson.