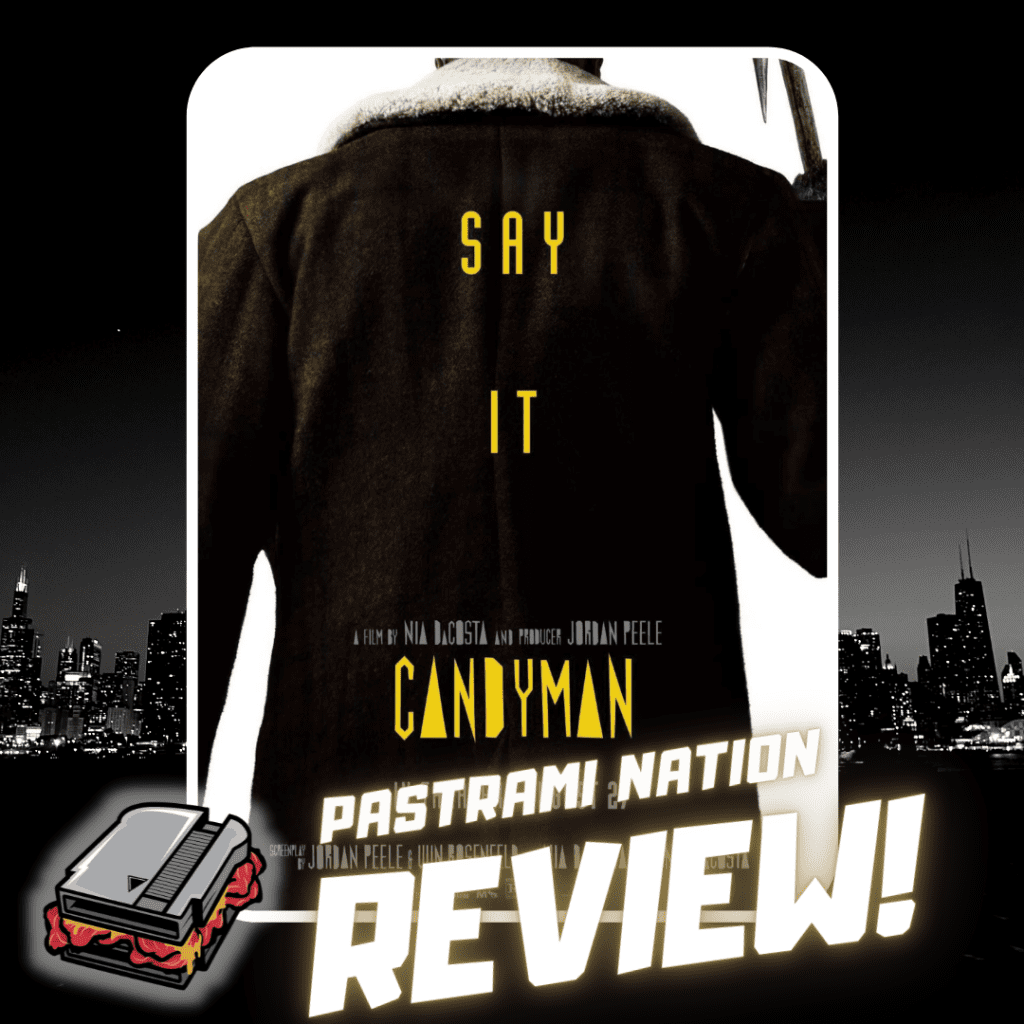 “Candyman isn’t a he, he’s the whole damn hive.”

Although it’s a bit muddled at times, Nia DaCosta’s CANDYMAN is an atmospheric horror film that delivers on its promise. It brings the mythos into the modern era by combining current issues with the legend of Candyman itself, much like the original film. From the opening logos, things feel disorienting, and that continues through the opening credits with interesting cinematography and an eerie score.

Speaking of cinematography, that was one of my favorite parts of the movie. The environment is as much of a character as the humans (alive and dead), and the camera captures all of it. Wide shots give us a glimpse of how massive this world is, but it also feels very claustrophobic. By doing this, there are things hiding in plain sight that you won’t notice at first, but once you do, it’s terrifying.

Yahya Abdul-Mateen II gives a very good performance as Anthony, a struggling artist who moves with his partner into a loft in the now gentrified Cabrini. While exploring the city, he discovers the true story behind Candyman, and he starts to use the macabre details of the legend in his artwork. By doing this, his world starts to unravel into a nightmare, putting his sanity into question and unleashing an unspeakable evil into the world.

The performances all around are great, but it’s Yahya and Coleman Domingo that steal the show every time they are on screen. Yahya has proven himself in a variety of roles, including Black Manta in Aquaman and one of my favorites, Cal Abar, in the HBO limited series Watchmen. He’s always hard to take your eyes off of with his intensity and charm, which he also brings to this film. Coleman is one of those actors who demands your attention when he is on-screen; he’s a powerhouse in everything he’s in. When his character William tells Anthony everything about Candyman, you are buying every word and truly fear what is to come.

The power of storytelling and myths plays largely into the film’s narrative. The way the movie goes about explaining what happened in the past is unique and fresh. It utilizes shadow puppets to show us the history of the legend, and it’s very cool to experience on the big screen. Every part of it is extremely detailed, and the artistry behind it is beautiful, bringing a new visual layer to the story.

Nia DaCosta is going to be a director to watch; she brings you into the story and never lets you go. The film is produced and written by Jordan Peele, and even though it has his fingerprints all over it, it is DaCosta’s show. Much like Get Out and Us, the film is more interested in building atmosphere and a sense of fear rather than straight-up scares, and that’s a good thing. It’s not going to make a whole new generation afraid of mirrors, but it will remind you how terrifying Candyman really is. Even when it veers off the path and forgets what it’s trying to say, it always picks up again to bring the terror.

This movie is a welcome return to the franchise and, like all good horror, has an important message at its core. It’s gory, smart, and deserves to be seen. Make sure to check it out.