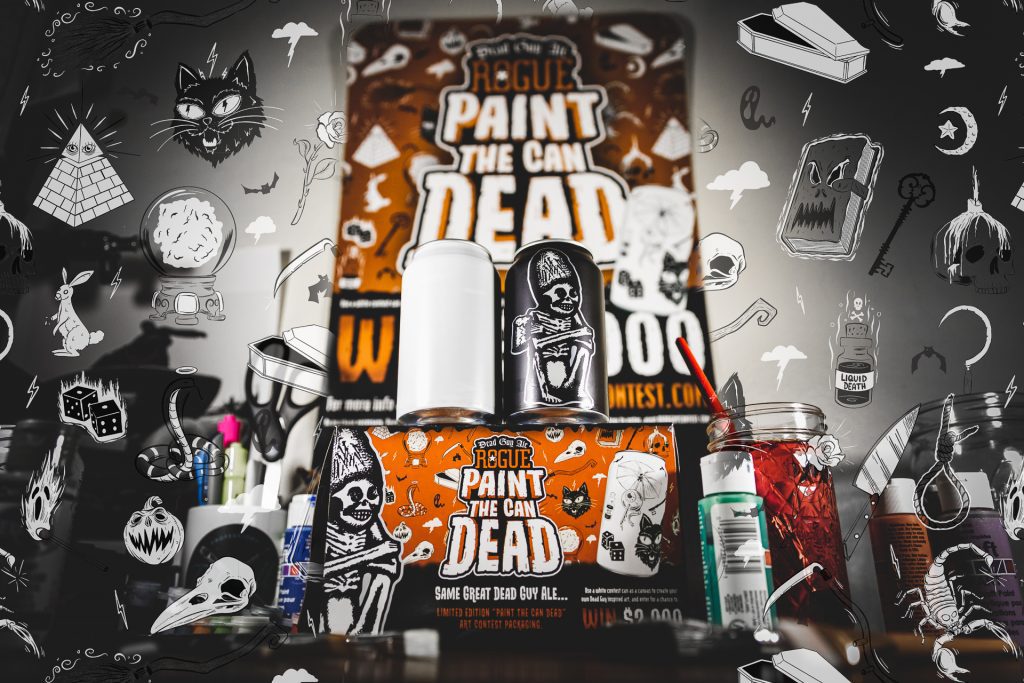 For the second year, Rogue Ales & Spirits is celebrating its flagship beer with the ‘Paint the Can Dead’ campaign. Starting today, Rogue is challenging fans to create original Dead Guy inspired can art on a special edition blank white can. New this year, a panel of celebrity judges will pick the grand prize winner to receive a $2000 cash prize. Twenty-four weekly runner-up prizes will also be awarded throughout the competition.

Dead Guy Ale is a Maibock-style ale using proprietary Pacman yeast. This award-winning ale is deep honey in color with a malty aroma and a rich, hearty flavor. That unique flavor profile was the talk of the town when the beer made its debut during a Day of The Dead celebration at a popular Tex-Mex restaurant in Portland, Oregon. Gratefully dedicated to the Rogue in each of us, Dead Guy has been Rogue’s flagship beer for over 30 years.

“Dead Guy was an instant hit — we knew we had something special and wanted to share it with the world,” says Hagen Moore, VP of Marketing and Creative. “It’s been our most popular beer for decades and is enjoyed all year-round, but it tastes especially good in the fall around Halloween. We’re excited that it’s Dead Guy season and are thrilled to launch the second annual Paint the Can Dead competition with a panel of impressive judges. Last year we received over a thousand high quality entries, and we can’t wait to see everyone’s creations this year.”

Meet the 2021 Paint the Can Dead judges:

Chef Masaharu Morimoto, Iron Chef: Masaharu Morimoto is a Japanese chef, best known as an Iron Chef on the Japanese TV cooking show Iron Chef and its spinoff Iron Chef America. He is also known for his unique style of presenting food. Chef Morimoto has collaborated with Rogue since 2003 including releasing the Morimoto Signature Beer Series and most recently launching a single malt whiskey.

Aaron Draplin, Graphic Designer: Aaron Draplin is an American graphic designer, author and entrepreneur based in Portland, Oregon. Born in Detroit, Draplin moved west to Bend, Oregon at age 19. His career started with snowboard graphics, then a short stint in the professional world, eventually going out on his own as the Draplin Design Co. in 2004.

Mike Bennett, Illustrator & Public Joy Creator: Mike Bennett moved from Central Pennsylvania to Portland, Oregon in the winter of 2016. He studied Art Education, Computer Design, Illustration and Animation at Shippensburg University of Pennsylvania and proceeded to chase his dream of illustration and character design immediately after his graduation in 2012. Mike pursues his dream of being a full-time artist by tackling various illustrative “challenges” and constant creation in his free time.

LAmour Supreme, CZARFACE, Mishka, and more: Discovered as a teen by the seminal skateboard/punk rock/heavy metal graphic designer Pushead, LAmour Supreme has reinterpreted decades of comic books, action figures and monster movie references and twisted them into his own lexicon of 21st century hyper-pop imagery.

Pick up Rogue’s limited-edition Dead Guy Ale and enter the Paint the Can Dead contest for the chance to win. Visit deadguycontest.com for more information and use the Rogue Finder to find Dead Guy near you.

Rogue Ales & Spirits was founded in Oregon in 1988 as one of America’s first microbreweries. Rogue has won more than 2,000 awards for taste, quality and packaging, and is available in all 50 states as well as 54 countries. Proudly rooted in Newport Oregon, Rogue’s beers, spirits, cocktails, seltzers and sodas are a liquid ode to Oregon and the endless inspiration that its land, its sea and its people provide.

Nolan Smith
0
Tags :
Rogue’s Paint the Can Dead Contest is Back for Year Two with the Addition of Celebrity Judging Panel