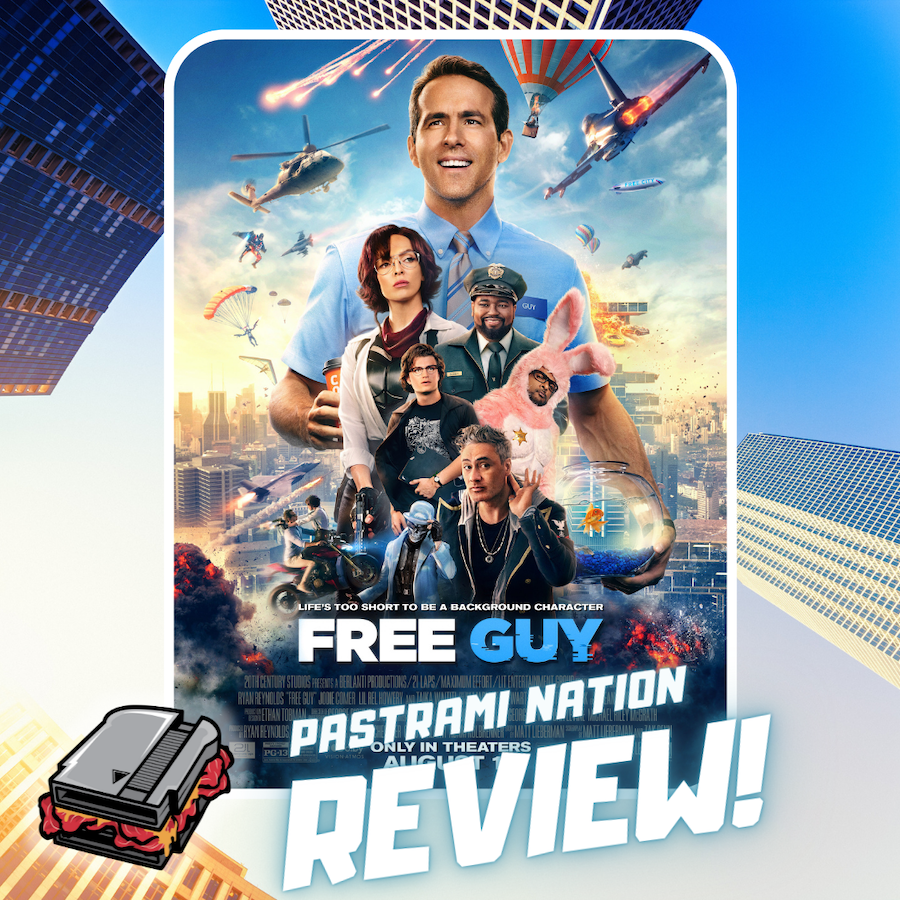 Initially set to release in July of 2020, Free Guy fell victim to the delays caused by Covid. In a way, it would have been the perfect movie to release to streaming during the lockdown; it’s the uplifting and joyous bolt of energy we all could have used. In the end, it wasn’t meant to be, though, and the movie was pushed back a few times before its ultimate release at theaters this past weekend. While it would have been nice to see it sooner, it’s a movie that deserves the big-screen treatment, and I’m glad they waited.

At its core, Free Guy is about the freedom to choose what path you want for your life. Like many of us, Guy (Ryan Reynolds) is content living the life he leads. Every morning he puts on his khakis and blue shirt for his job at the bank. He walks past the same pair of shoes every day with barely enough money in the bank to afford them. He goes to the coffee shop and orders his coffee and then to the bank where he works with his best friend, Buddy. A gang robs the bank of hoodlums; they walk home and then do the same thing the next day… and the next.. and the next.

One day he decides to make a change. Instead of simply walking by and saying the same thing to a girl he keeps noticing, he says something different, which sets into motion a series of life changes for Guy. One day he doesn’t just lie down and let the bank be robbed; he stands up for himself and steals a special set of glasses that allows him to see the world in a whole new way. The thing is that he’s an NPC in an open-world video game called Free City, and he is about to learn that he is more than simply just a background character in his own life.

The movie works on so many levels. On the surface, it’s a summer blockbuster in every sense of the word. It carries a family-friendly PG-13, has big action sequences, and a charming cast that carries the story. On another level, it’s a life-affirming tale about striving to do better when you feel stuck. Even more, it shows that it’s possible to achieve the impossible when the odds are stacked against you.

Directed by Shawn Levy (Night At The Museum, Real Steel, Stranger Things), the movie starts a bit slow but takes off once Guy discovers what he’s capable of. From the start, you are brought into the chaos and action of the video game world and introduced to the lives of these characters. It’s monotonous and boring, a commentary on what people go through every day. We are then introduced to Molotov Girl, played to perfection by Jodie Comer, and it’s because of her, this world is turned upside down. She is on a mission in the real world to take down Antwan (Taika Waititi), who runs the game studio that created Free City, and in-game, she accepts Guys’ help to do so.

When Molotov and Guy are together, they have solid chemistry together. Comer and Reynolds have sparks that fly off the screen; she is able to counter his quips with such ease and make him seem vulnerable. She also has an interesting relationship with her former business partner in the real world, Keys, who is perfectly cast with Joe Keery in the role. The two have a history together, and now that he’s working for Antwan, things have become complicated. Even though Guy is the protagonist of the movie, it’s Comer who practically steals the show and makes it her film. It would also be a shame not to mention Lil Rey Howery as Buddy, Guys best friend. He’s great in the movie and is fantastic when he’s interacting with Reynolds on screen. There is also a bevy of cameos that are guaranteed to surprise, which won’t be ruined here, but they are fantastic!

There is a lot to love about Free Guy; it’s easily one of the most charming and fun movies to hit theaters in a long time. It is part Matrix, part Ready Player One, and part Fortnite and Grand Theft Auto. It’s heartfelt, hilarious, and full of action. Shawn Levy has made his mark in the world of filmmaking, and he always delivers what he promises. If you are looking for a candy-coated CGI extravaganza, look no further than this.