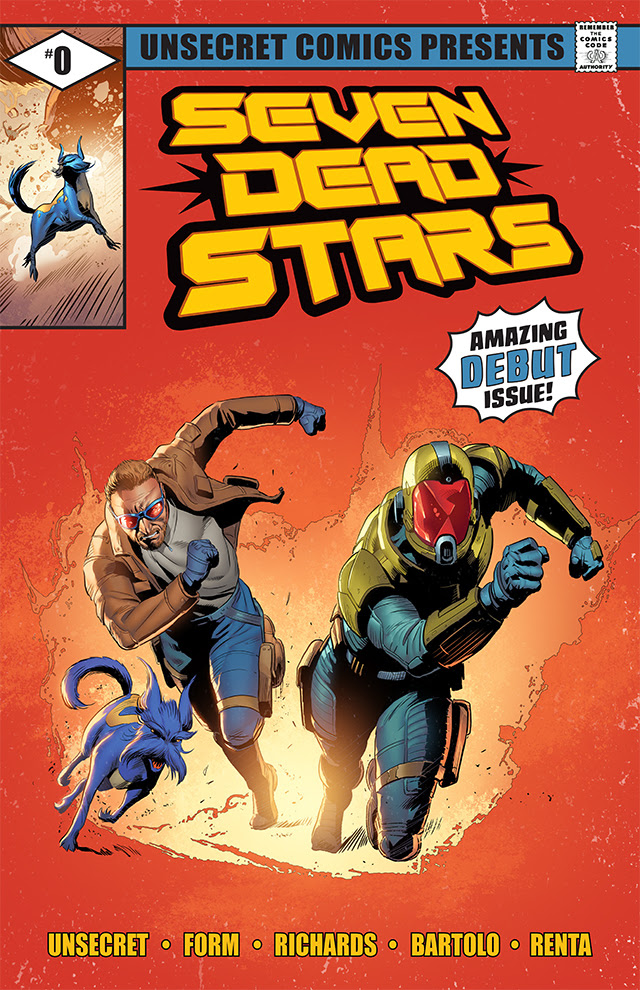 In the prelude to the ongoing Seven Dead Stars saga, offbeat heroes Unsecret and Form crash land on a mysterious planet where things aren’t always as they seem. Although the natives appear friendly, there are clues that suggest something more sinister might be at play. As the tension builds, their only true friend is a curious blue dog harboring secrets of his own. What they discover along the way will not only alter the course of their lives, but the future of the entire universe.

Inspired to combine orchestral scores with hip-hop beats, the Seven Dead Stars music universe launches with the one-off single “Deep Space” which is now available for streaming! It will be followed by three songs from the upcoming “EP Zero”, the accompanying soundtrack by Unsecret and DJ Form, mixed by renowned blockbuster film score producer Greg Townley. Look for “Keep Running” on  Aug. 20, “Next Level” on Aug. 27, and “Set It Off” on Sept. 3. With vocal samples by Wes Writer, horns by Keith Everett Smith, and strings by Chris Carmichael, Seven Dead Stars is a multimedia juggernaut aimed to conquer the universe!

“Seven Dead Stars is a natural extension of growing up on Star Wars, Lord of The Rings, and comics,” said Unsecret. “What began with a couple of long-time friends trying to make some fresh music quickly grew into something much bigger than we imagined.”

“We also wanted the story to be loads of fun,” added DJ Form. “Not taking ourselves too seriously. The songs reflect that same attitude, blending hip hop beats with cinematic scores.”

“When I signed on to design and draw a record album cover a year and a half ago, I never dreamed it was secretly the ground floor of creating a whole universe of characters and storylines,” said artist Cliff Richards. “What started as a mysterious music project with Unsecret and DJ Form grew and grew until it became a comic book. Then that comics concept just kept on growing! Each week were new characters, new environments, new story pages of breathtaking twists and turns. Seven Dead Stars is a series of supernova concepts and ideas — some of the most powerful comics I’ve seen in years. I’m proud to be a part of it!”

“From the first page, I was in love with this story,” said Kathryn S. Renta, Letterer & Production Artist. “Form and Unsecret‘s friendship is just antagonistic enough to be fun and endearing, plus I (not so secretly) want a Buster of my own! Form is an absolute delight to work with. I can’t wait to work on the next issue!”