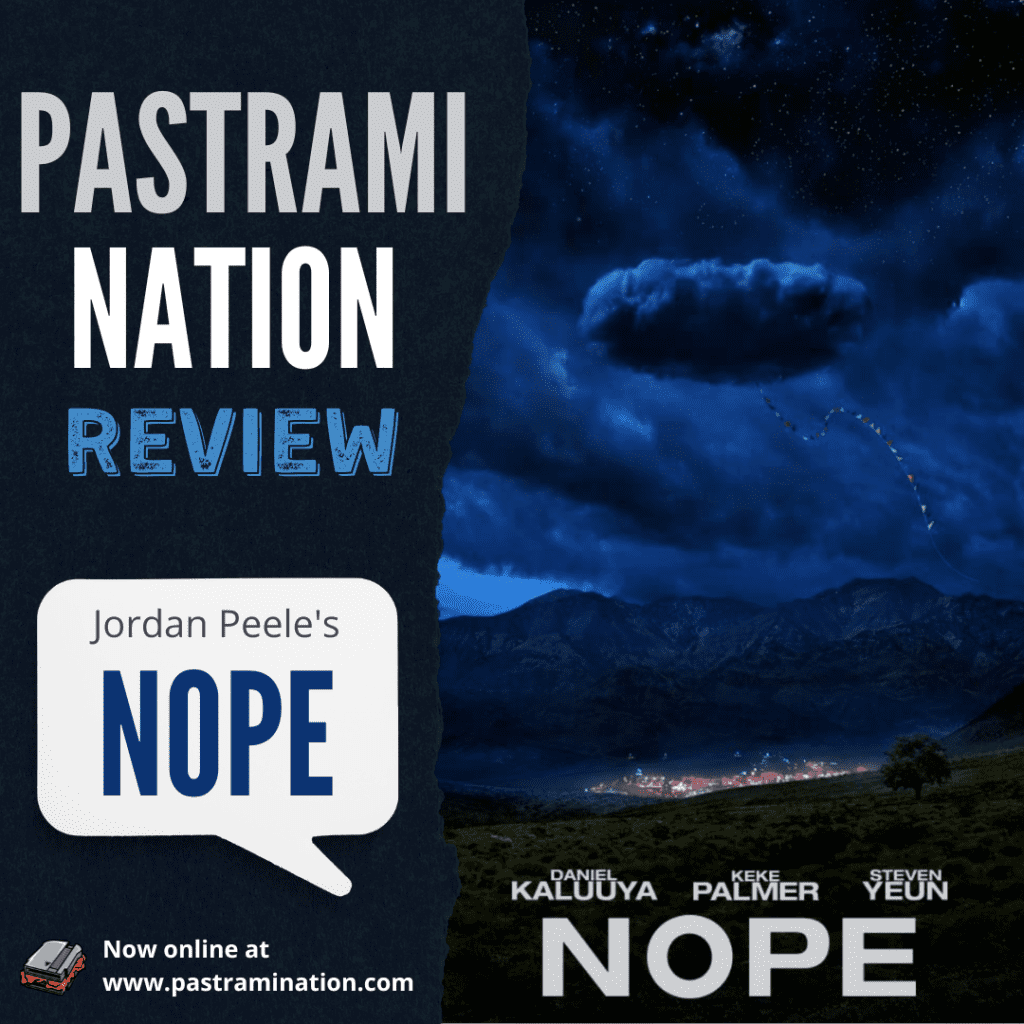 Over the years, Jordan Peele has successfully shed his funnyman image and has proven he is a filmmaker to be reckoned with. Whether it’s his powerful debut Get Out or his sophomore effort Us, he takes on society as a whole and shines a light on the real monsters in the world. Like all good horror movies, he makes you think about the state of the world through an entertainingly terrifying lens. Now he brings us a new nightmare, one that is different from anything he has ever attempted but still as effective and thoughtful as his previous films.

NOPE is a movie that is full of puzzle box pieces that beg to be discovered upon watching it. It’s not the type of movie that should be spoiled for anybody, so I will keep the synopsis and review as basic as possible. It is all just the tip of the iceberg but feel free to skip the next few paragraphs if you want to go in completely fresh.

The movie follows two siblings, OJ and Emerald Haywood, who run a historical California horse ranch and rent the animals out to Hollywood studios. They soon discover something mysterious in the skies over the ranch and become obsessed with proving that Alien life exists. At the same time, nearby theme park owner Ricky is using his former child star fame to boost attendance at his ranch to experience a spectacle like no other.

The thing about watching a Peele film is you always feel like you are watching a movie with somebody who also loves movies. He is a director with the utmost reverence and respect for what came before, and he builds on that. This one, in particular, feels like an homage to one of the greatest of all time, Steven Spielberg. One can easily draw parallels between Close Encounters of the Third Kind, but the one that is really apparent is Jaws. It says a lot about the nature of mankind and the lengths some of us are willing to go to get what we feel like we need.

In less capable hands, this movie could have been a disaster. Along with a stellar cast (including Keke Palmer and Daniel Kaluuya as the Haywood siblings, Brandon Perea as Angel, and Steven Yeun as Ricky), he knows how to move the story along at an interesting pace. There is plenty of build-up within the film’s first hour, and the last hour comes at you fast and hard. The whole time he keeps you invested and curious about what the story will be.

With his previous two films, he wasn’t shy about what he was trying to say. The social commentary was in your face and didn’t hide behind a facade. This one is a bit harder to decipher what it means, but when it clicks, it’s a beautiful thing. Putting all of them side by side, it’s easy to say that it’s his weakest film, but it’s still one of the most engrossing experiences of the year. The script doesn’t feel as fleshed out as it could have been, but that’s a minor complaint. Remember that this isn’t a horror movie but more of a sci-fi thriller, although there are truly terrifying moments that will stick with you for a long time.

NOPE is a movie that should be experienced on the biggest screen possible. It was shot using IMAX cameras, and everything from the rolling hills of the desert to the eerie cloudy sky was beautifully captured. It proves that Peele is the real deal and deserves all of his success. It’s exciting to think about what he will do in the future.

Go check it out!