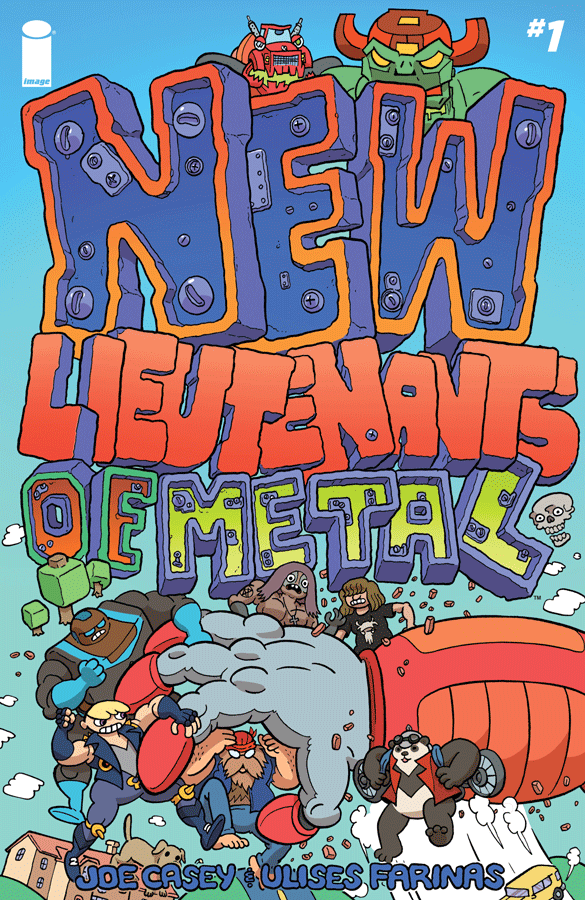 New Lieutenants of Metal is written by Jim Casey (Ben 10, Wildcats 3.0) and illustrated by Ulises Farinas (Gamma, Judge Dredd). Visually at home with modern day cartoons, this series is a mash-up of metal and superhero.

As a disclaimer, I must admit I am not the most metal of metalfolk that I know. I would go as far to say that I love music of many styles, and my brush with this beastly, gargoyle-winged genre entails of (en-trails of?) mostly old Sabbath, Metallica, Iron Maiden, and spurts of Metalocalypse’s Dethklok (per introduction of my sweetheart). That being said, I have a heart for metal. It is a subculture that I’ve witnessed secondhand (which I hear is more dangerous for your health) through friends and a realm that I have always been fascinated with, but never subscribed to.

Before plunging into the premier issue of New Lieutenants of Metal, I grimaced my brows as fiercely as possible and administered to myself the curated three-song playlist to get as much of a tone from this read as possible. Something about the cover gave me expectations of an adrenaline-laden adventure brimming in excess of metal and violence to quench the bloodlust of my closeted preteen angst. The tunes immediately took me to a place of slow, closed-eyed head banging, with occasional (awkward) punches to the heavens. I was amped, and my inner demons were stirred to a hissy brood by slow, heavy-footed drum beats that pulsed and echoed through my skull as I flipped the page.

We meet Steppenwulf, barefoot and distressed, as his therapist explains to him a “de-metaling” program to assimilate him back to the humdrum normalities of the working-class rat race. He is being held as a patient at Salem Center Adjacent (which from the looks of it is a rehabilitation center for metalheads). As Steppenwulf tries to explain to his doctor that it isn’t metal that is his actual problem (“Y’SEE, I’VE GOT CERTAIN TENDENCIES… VIOLENT TENDENCIES…”), he begins to transform into some kind of monster of metal (which I audibly ‘whoa-ed’ to). Before any damage and loss of control was achieved by the monsterized Steppenwulf, the roof crumbles in as we are introduced to “The METAL JET,” the aquiline hero ship of the New Lieutenants of Metal.   Fronted by the “The Mighty Krieg,” the NLOM have arrived to free their committed comrade to assist in a battle against a duo of “RAMPAGING, RUNAWAY MONSTER TRUCKS!”

This was the portion of the story where my attention fizzled out and I realized that I wasn’t too into the story. I was really more interested in Steppenwulf’s back story, and wanted to see why he was being institutionalized. I wanted to learn more about his fellow patients and get a feel for this universe where metal was such a problem that there were rehabilitation programs against it. I began to feel that the names fell short of the characters introduced, and that the use of all caps and exclamation points exhausted me to the point of desensitization of font-play. For a story with such a title and suggested soundtrack, the issue felt pretty quiet. I was hoping to get fucked up, at the least, ruffled and black-eyed.

If my review seems like it was more enthusiastic in the beginning, it’s because that’s how the plot set me up. I feel dickish to criticize so much, but I did feel underwhelmed. I was bummed out. New Lieutenants of Metal was such a badass title that it got my mind running already with the possibilities of how it could be, and I couldn’t shake my thoughts off of the heavy-metal fantasy I wanted it to be. Perhaps a less suggestive name for the series would have not pre-defined my read. Please, read it for yourself. Remember that this is just the opinion of someone who may have no say in what is good or bad for a comic of this style.

All whining aside, the best thing to me about New Lieutenants of Metal was Ulises Farinas’ detailed illustrations. Paired with Melody Oftens’ color-choices, this issue landscaped a vibrant universe, creating a backdrop capable of humor and action. It was definitely a pleasure to analyze and look over Farinas’ characters and to get lost in the directional power of his panels. Some parts even read like instructional diagrams (that I understood!), which leads me to believe that he could easily convey a story sans dialogue. Further investigation of Farinas’ body of work was impressive. Although he has not been illustrating as long as other seasoned comic book artists, he is a chameleon in tone. Farinas is capable of rendering imagery from whimsical to dramatic and also in such a way that his art is personal and obvious to his hand.

New Lieutenants of Metal is a fun, colorful, light read with many nods to the genre it is named after (but in my opinion, not enough headbanging).