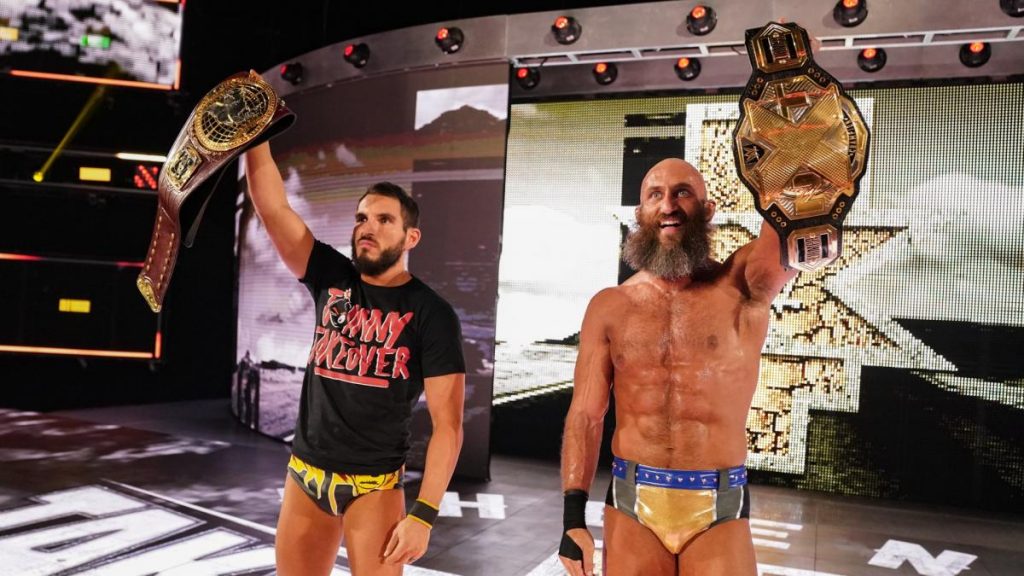 It has become a known fact: the NXT Takeover event held the day before a significant WWE event is superior in quality. Whether it goes against the Survivor Series, Summer Slam or the showcase of the immortals, Wrestlemania, the NXT brand has outshined the Raw and Smackdown’s efforts each time, at least in my opinion. With NXT Takeover- Phoenix, we get one of the best Takeover events in history, making for a tough act to follow for the Royal Rumble.

Let’s review match by match and break down what makes the card a winner. Think of the run time: a five-match card. That’s it, just five matches, and each one amazing.

To open up the show, we get the NXT Tag Team Championship match as the champions The Undisputed Era took on the monsters of men known as the War Raiders. The former War Machine team that ruled Japan came ready to win, but when you go against two of the best in the ring with Kyle O ‘Reilly and Roderick Strong, it isn’t going to be a walk in the park. We get the backbreaker buffet that Strong is known for, the strategic strikes O’Reilly commands, and the sheer power of the War Raiders. But not just power, as Hanson and Rowe possess agility and stamina that defies their sizes. This was one of the greatest tag team matches I have ever seen, and this is coming from someone who has watched wrestling since the Mega Powers and Legion of Doom reigned supreme. One of the best matches of the night, and a clinic when it comes to tag team wrestling.

Next up is our only non-title match, and it comes in the form of a grudge match between the knockout artist Kassius Ohno and the new shining star, Matt Riddle. The two always put on a great match, and at Takeover, it was no different. The former MMA fighter and west coast phenom has made an impact since he first arrived in NXT, and Riddle made a name for himself once again. But you are only as good as your opponent, and Ohno has consistently delivered high octane, impactful matches. It was a match of strikes and submissions, with Riddle winning the match the best way he can, with a tap out. Watch out for this guy, and keep an eye on Ohno, an amazing heel is hard to come by.

The North American Championship is up next, as we get the second classic match of the night. Champion Ricochet defends against Johnny Gargano. Gargano has scratched and clawed his way up to the title picture, and with this match, he shows that he deserves to be in the spotlight. I have been a fan of Ricochet since his Prince Puma days, and his aerial antics are always mind-blowing. However, I have been on the fence with Gargano since his DIY days. This match showed me I was wrong, Gargano is a first-rate wrestler. The ring chemistry, the reversals, the high suspense level, these two were amazing. Gargano came out on top, now holding the North American Championship, and I am excited for the feuds to follow. Ricochet needs to take a run at the NXT Championship or be moved up to Raw or Smackdown; he is more than ready.

The Women’s Championship is up, as Champion Shayna Baszler takes on Bianca Belair. Baszler has garnered a lot of heat from the fandom of the WWE Universe, and I am not sure why. Yes, she comes from an MMA background like Rhonda Rousey, but she is a great wrestler in her own right. Belair is one I haven’t been entirely sold on either, but she put on one heck of a match. An excellent, suspenseful match with some inference to keep up the heel persona of Baszler, we see Baszler showing that there is no woman better when it comes to submissions in NXT as Belair takes the long nap. This was a great match showcasing two of NXT’s strongest female wrestlers.

It’s main event time with the NXT Championship on the line. Former champion Aleister Black takes on the villainous Tommaso Ciampa in the third of the classic matches of the night in my opinion. I have been an Aleister fan since his days as Tommy End, but Ciampa has become one of the best wrestlers and characters in NXT over the past year. These two put on a fantastic show, knowing each other so well and having to pour it all into the match. The adrenaline was pumping, the ring awareness was there, and the game plan was set. Ciampa is one of the best heels in the WWE, and he rightfully retains his title as Aleister looks to be on his way up to the main roster.

I am excited to easily give NXT Takeover: Phoenix a 10 out of 10. It will be hard for the Royal Rumble to live up to the wrestling extravaganza seen at Takeover.