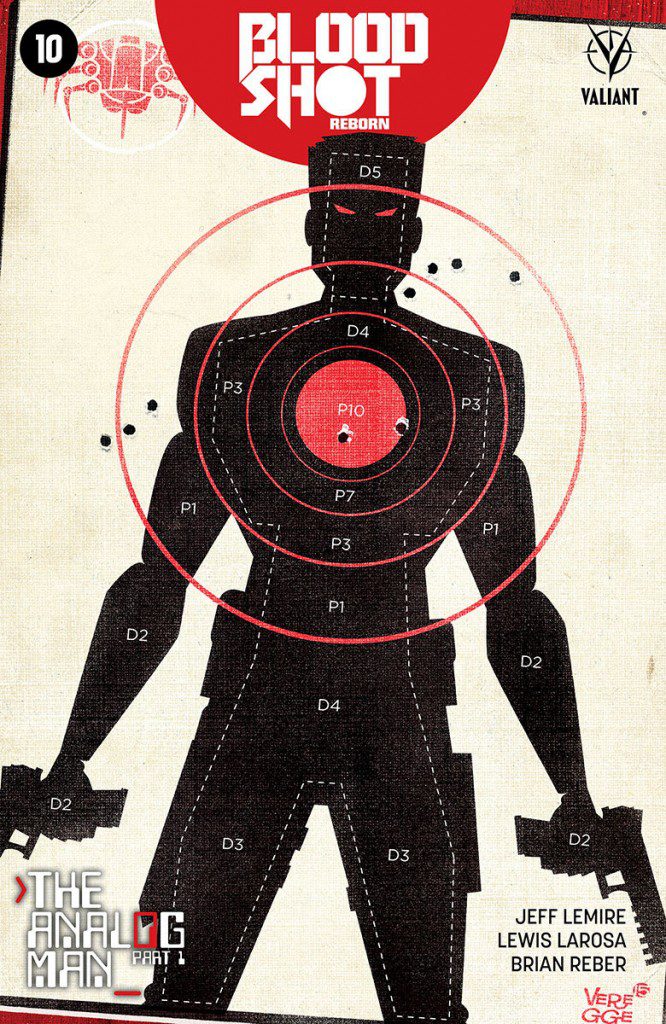 In 2016…Bloodshot kicks off the New Year with a mind-bending comic book event that must be seen to be believed!

As revealed today in advance of New York Comic-Con 2015, Valiant is proud to announce THE ANALOG MAN – a new four-part bombshell beginning in BLOODSHOT REBORN #10 from New York Times best-selling writer Jeff Lemire (THE VALIANT, Extraordinary X-Men) and blockbuster artist Lewis LaRosa (The Punisher)! This January, Valiant’s smash-hit ongoing series leaps forward 30 years into the future to reveal a world where Bloodshot is no longer the height of technological achievement…and the heroes of the Valiant Universe have given way to a ravaged and inhospitable wasteland…

Many years from now, Los Angeles has become a post-apocalyptic no-man’s land and the once unstoppable killing machine known as Bloodshot has become THE ANALOG MAN. Hopelessly outdated, Bloodshot’s taken on a new role as the protector of a small town, eking out a subsistence existence with the great love of his life – Magic – and protecting a group of stragglers who’ve weathered the storm. But when a gang of marauders arrives, the settlement’s survival is threatened, and Bloodshot is forced to bring justice to the distorted and disjointed badlands of the Valiant Universe!“Bloodshot has found some peace at last. Or at least he thinks he has,” writer Jeff Lemire told io9. “And then, of course, I’m going to rip that all away from the poor guy and send him on an adventure like none he’s ever had before…[and] it looks amazing. Lewis LaRosa is doing career-defining work. Wait until you see it! Monster trucks, Shadowmen, Ninjak, old Bloodshot. He nails it all.”

THE ANALOG MAN will also mark the first full-length story arc in nearly a decade from acclaimed artist Lewis LaRosa – a penciller renowned for his incredibly lifelike characters, intricate detail and dynamic storytelling. Noted for his acclaimed runs on The Punisher, Immortal Iron Fist, Amazing Spider-Man and more, LaRosa is one of Valiant’s most prolific cover artists, having previously contributed to hit series including BLOODSHOT, NINJAK, UNITY, X-O MANOWAR and many others. THE ANALOG MAN will mark his first complete storyline for Valiant Entertainment.”Over the coming year, BLOODSHOT REBORN is going to be building towards a critical moment that has widespread implications for all of Valiant’s biggest heroes. That road begins in THE ANALOG MAN – a widescreen action epic that is every bit as searing and intensely electrifying as a full-blown summer blockbuster,” said Valiant Editor-in-Chief, Warren Simons. “Jeff Lemire and Lewis LaRosa are firing on all cylinders and outdoing themselves with each new issue that comes in. Simply put, this is one of the most formidable creative teams anywhere in comics.”

To find out more about THE ANALOG MAN, join an all-star panel of Valiant creators and staff at New York Comic-Con 2015 on Saturday, October 10th at 5:15 pm ET for the 25 YEARS OF VALIANT: BOOK OF DEATH AND BEYOND panel presentation, featuring even more news and announcements live from NYCC 2015!