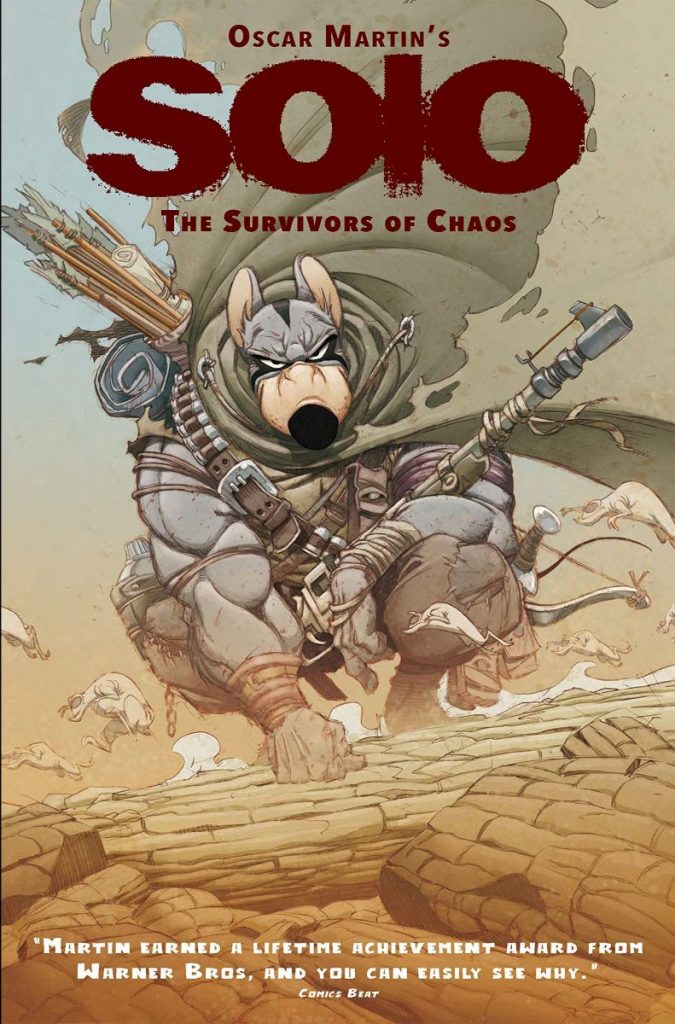 My first thoughts after seeing the cover for “Oscar Martin’s Solo The Survivors of Chaos” from Titan Comics was “This must be what Mighty Mouse looks like all grown up.” As is stated on the back cover: “In a desolate, post-apocalyptic world filled with vicious mutant animals and savage hunters, Solo the rat does everything he can to survive.” Sounds great, right?

We open up with a monologue by Solo as we see a wild beast following a set of boot prints in the snow. Tracking these footprints, the beast comes around a hill, to the sight of what appears to be a dead anthropomorphic rat. The creature opens wide as it charges in about to take a bite when suddenly an arrow flies out of nowhere piercing right between the eyes, the beast falls dead. An older looking rat calls out to his son to see if he is okay as this was a setup to lure the creature out in the open. As they discuss what they are going to do with this new food source, they are interrupted by a group of Weasels. All of them are armed with either a jagged dagger and sword or a gun ready for a throwdown. These two rats easily take out the weasels with their swords in a fascinating way. After a brief respite, they are beset by another group of foes who prove to outnumber the rats significantly and are much more fearsome. The older rat holds them off as best as he can while Solo cuts off what he can of the dead beast, the rats leave with what little they were able to keep while the victors gloat over victory.

After arriving to a warm welcome at their home from the rest of the family, Solo’s mother consoles the hunters about their own dissatisfaction with what they were able to bring home from the hunting trip; they waste no time in cooking up the meat. While portions are being dished out to all of the rat family, Solo gives up his own to the little ones as he is not hungry. With the thought of having to leave coming up very soon, he only wants to be alone. He leaves the dinner table to go outside to think. While squatting on a rock, Solo’s father comes out to check on his son and to speak to him about leaving.

Throughout the next couple of pages, we see Solo as he makes his way in life. We see his hardships, and he is also narrating what he feels about the different struggles he has to endure. One that specifically stands out to me is when he attempts to reach a cave only for a massive one-eyed beast to throw him out. Solo pulls out his gun, shoots the creature in the face, ending the fight before it began.

After holding up in a shallow cave to wait out the winter, he emerges to a more desert looking wasteland. Remembering his father telling him about food being used as currency, he heads off in search of a scrap yard to make an exchange.

Making his way to the scrapyard, he finds a human boy that is frightened by the rat. Running away, the rat follows only to be stopped by the boys’ father, a scrap man. Offering up the meat, the scrapman is willing to give him a basic gun when Solo sees a cooler looking one and asks for that instead. While bartering a cat, twice the size of Solo drops down a bigger fresher bundle of meat in exchange for that same gun. The scrapman seeing where it is going reminds the cat of the neutral zone they are in, which means no killing. While scrap man is trying to get the cat to leave, Solo jumps over the man’s head, kicking the cat in the jaw, knocking him back. In a few moves, Solo easily bests the cat only to impress the scrap man who is also yelling about there being no killing here. Solo then sweetens his original offer with the addition of the cat and the cat’s meat.

Later we see Solo walking in the middle of the night under pouring rain. He is all alone in the dark. With the rain dulling his senses, his instincts kick in, allowing him a second to prepare his defense when a mob of Nocturnes surprise attacks him. They, being trained to attack and not to kill, with their saliva acting as a solid anesthetic, easily knock out Solo. Two men arrive shortly after Solo falls unconscious and take him away.

Lastly, we see Solo waking up in a mystery location that you are sure to love. We are brought to a lovely scene of blood, gore, and violence that is sure to leave you wanting more.

That’s only Chapter one.

In Chapter Two, we are treated to much more violence than chapter one, and you are in for a real treat with the story that you get out of this. With its use of survival elements and the fear of being attacked at any moment. The first half of this chapter feels as though they could write an entire graphic novel about just that part alone, while the second half adds much-needed closure to wrap up the story with a nice little bow.

The artwork of this Graphic Novel contributes significantly to the reading experience. There were times when I would stop reading and study the panels before me. The colors are just what they need to be to convey the feelings the author intended. Everything is gritty and post-apocalyptic; you always have the feeling that something is going to happen to Solo.

Solo, as a character, screams, “Rat-Rambo.” Just like Rambo, he rolls Nat20s in every combat encounter with the occasional misstep causing him injury or to hurt in some believable way. He is the kind of character that you know will come out on top no matter what, and that even though he is not invincible, he is a believable character. I love how he narrates his inner feelings about everything he’s going through. The writer and artist did a fantastic job of demonstrating the struggles he went through and how he may not have been successful in winning every single encounter; he survived them all even if just barely.

While they use every speaking character efficiently, I wish they would have explored individual relationships more and shown us this. While we get a super in-depth look at Solo and his feelings about the world in which he lives, we only see one aspect of most of all the characters. I also felt as though the second half of chapter two was rushed. It would have been nice to see a little more of how he lives during that part of his life, and it made the second half of the story feel a bit more like a montage of this part of Solo’s life. Another thing I would have liked changed would be their use of the “knocked out and wake up in another place” trope. While this is very useful in storytelling to take a character from one place to another, I feel as though they used this just a little more than they should have, although this does help with explaining places to the reader in an in a fiction disposition.

This feels like they took inspiration from multiple stories and stuffed them into a single graphic novel. While combat and death are the main aspects of the story, there is an aspect of love and romance in this story similar to that of John Carter from the Barsoom series. If I had to compare this story to any two films, I would say it’s a mix of “A Princess of Mars” and “Gladiator.” They also never waste a character. No matter how big or small of a role they play in the overall story, they are never just useless fodder. They all serve a purpose and feel as though they have something to contribute as well as the feeling that they live and breathe in this world outside of this story. Their use of characters is what brings this whole world to life, and you feel as if you are only getting a single adventure amongst a much larger world filled with more than what we have been shown. This graphic novel is for sure one that should be added to your comic book collection.