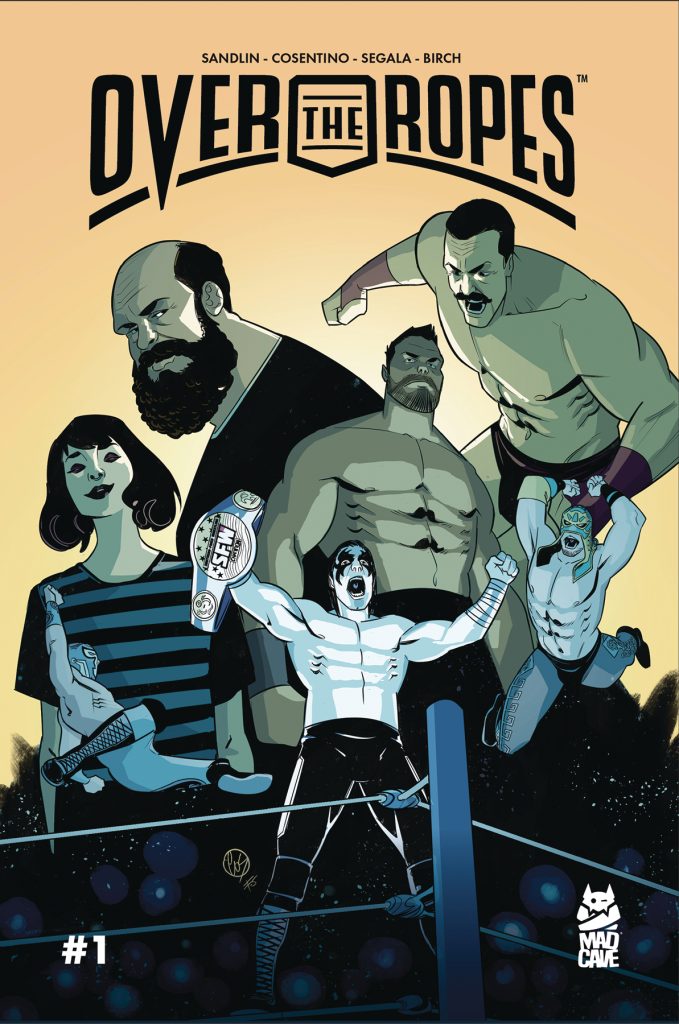 I love professional wrestling. Anyone who knows me knows this. I grew up on the WWF: the spectacle, the storylines, the characters- it’s a work of art. Even to this day, I still follow several promotions, excited to see how the business continues to evolve. So when I saw Mad Cave Studios was publishing a book steeped in pro wrestling? I had to check it out. Welcome to Over the Ropes.

Written by Jay Sandlin, with art by Antonello Cosentino, colors by Francisco Segala and letters by Justin Birch, Over the Ropes gives us a look at the spectacle and the inner workings of pro wrestling. Its 1992, and Southern Fried Wrestling is run by its biggest star and founder. “RAMBLIN'” Ricky Radison. Ricky is currently feuding with his son, Billy, for the spotlight and the heavyweight title. This book isn’t focused on either of them- no, our attention is on Jason Lynn, a jobber. A guy who’s job is to work the match and lose. It is an important role, no doubt. It takes two to make a fantastic match, but Jason wants more.

When he gets the call to work a title match, he sees his hard work paying off. That is until he realizes he is playing the role of the boss ‘ son due to an injury. Jason makes a gutsy call and strikes out on his own, going against the plan. What consequences await this newly risen Phoenix? In the world of wrestling, you stick to the script. Sometimes we see people go rogue, but live in front of an audience? You have to roll with it, but man, there has to be hell to pay.

Sandlin crafts a story that highlights many of my favorite aspects of pro wrestling- he gives power to the jobber, we have luchadores, behind the scene antics, larger than life characters and gimmicks. This is like a love letter to pro wrestling, and I totally dig it. The artwork here is fantastic, very clean, and fluid; the designs are excellent as well.

I loved this first issue of Over the Ropes. It is fun, entertaining, and brings the big fight feel to sequential art. I can’t wait to see what is next for Jason as he just put a massive target on his back. Worth the price of admission, make sure to check it out!

4 thoughts on “Over the Ropes #1 Review: Squared Circle Living”