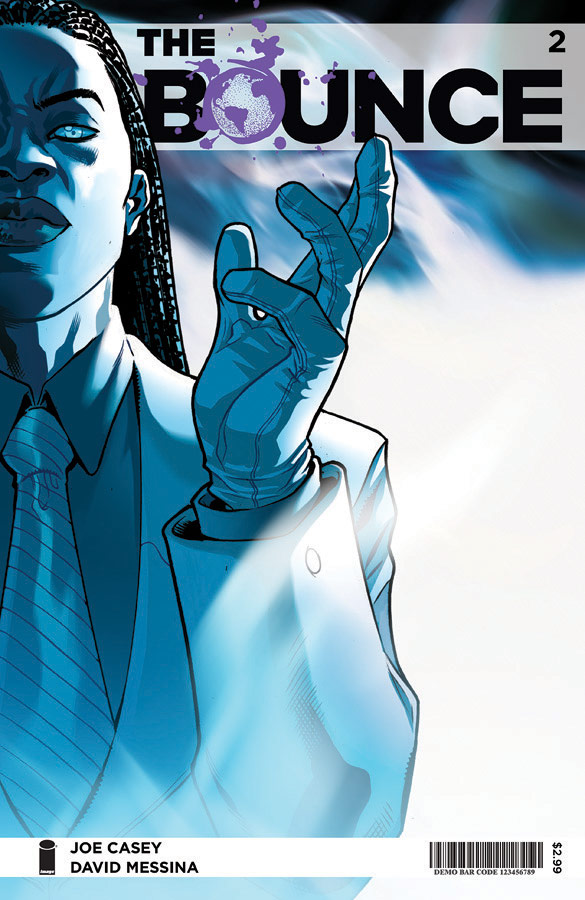 The Bounce Book Two continues to please. Joe Casey and David Messina continue to bring the intrigue of their anti-hero Jasper Jenkins as more is revealed in another great issue. More is revealed about our building bouncing hero as we take a deeper look into his origin. The story takes place where it left off as our hero taking a serious hit from The Fog. Not a physical hit but one that would make Tommy Chong proud. The Fog possesses super human power of emitting a what seems like a hallucinogenic gas that takes our hero to a far out place that is far out, man.

While under the influence our hero reunites with fellow slacker buddy Zander. Problem is, Zander’s dead. Is it a dream or real?  Stuck in a limbo like world filled with costumed super humans Zander has one sobering purpose, to be the worlds’ damsel in distress. Is this drug induced vision a reality? Or is it an extension of Jaspers’ personal transference into the reason he has starting his crime fighting ways. Jasper clearly feels a sense of responsibility in Zanders death or disappearance. This episode of enlightenment is broken up by every substance abusing slackers’ nightmare, a raid from the Police. The plot thickens as we find out that substance abuse runs in the family as the pill popping District Attorneys is in fact Jaspers over achieving older brother Jeremiah Jenkins.

The man in the dark suit continues to move his prophetic world changing plan along. Hob knobbing with government officials he continues to gain allies for his plan. The scale of his organization and his plan is presented as he gazes upon one of the United States highest levels of government buildings referring to it as a museum piece proves it is easy to see his intentions for change are huge.

The artwork in this issue still continues to please as the characters actions and facial expressions display true feeling and emotion.  It is amusing twist and events are very familiar and very often funny as we relate to this character trials and tribulations to well. Even when the world seem to be against you the righteous still fight the good fight and I look forward to seeing the events of his world unveil. Its sarcastic humor is hilarious till the last page.  This story is smart funny intriguing and a definite treat for the eyes and brain. Don’t let the substance abusing slacker fool you this story is great. Just like the hero you will be bouncing back and forth from humor to intrigue in this issue of Image Comics “The Bounce. “Just for the record there was no familiarity to the last page. Well there was this one time. We give this issue a strong consistent FOUR out of FIVE on the Pastrami Nation Scale.