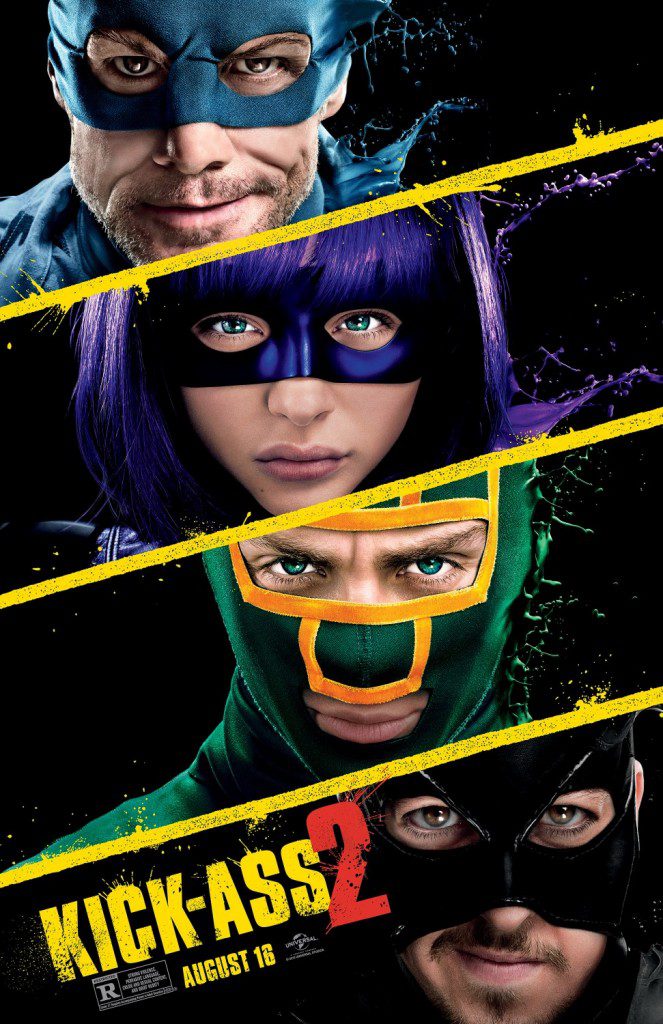 (Victorville)— In 2010, a superhero movie unlike any other made it’s way to theaters. Super powers? None. Tragic hero origin? Not here. Over the top violence? Plenty. The movie was Kick Ass, a relatively low budget film about normal, powerless people becoming super heroes, and it was a hit. Three years later, we get the sequel, but is the charm still there? Does Kick Ass 2 stand tall, or should it hang up the tights?

Based on the Marvel Comics book by Mark Millar and John Romita Jr, the sequel reaches the level of quality set by its predecessor, and surpasses it in every conceivable way.  The film once again follows Dave Lizewski, better known as Kick Ass (Aaron Taylor-Johnson), the not-so superhero who started a revolution. Now, thanks to the actions of the first film, regular, everyday people are dawning masks and becoming heroes, like Sgt. Stars and Stripes (Jim Carrey) and his dog, Eisenhower. Hit Girl (Chloë Grace Moretz) is back as well, now trying to find a balance between being a hero and being a teenaged girl. But the world gets plunged into turmoil when the Red Mist (Christopher Mintz-Plasse) decides to rechristen himself and become the world’s first super villain, out to end Kick Ass’s life.

What we get in the sequel is a lot more action, a lot more violence, and a lot more characterization. I should make it clear that even though this is a super hero movie, this is not for children, hence the R rating. Hit Girl gets the spotlight for a good portion of the film, as we see how life has been since her tragic loss in the first film, and how a trained crime fighter since birth can adapt to the life of a teenager. That doesn’t mean we don’t get plenty of Kick Ass himself, who learns more and more about the life of a superhero: the good and the bad side.

This is rated R super heroics at its finest. Kick Ass 2 delivers the action, the costumes, and the comedy in just the right amounts to make for an extremely impressive film. Just remember, this isn’t Spider-Man or the X-Men: this earns its R rating and does so amazingly. The summer is ending, so why not catch one more amazing action flick before fall is here? Kick Ass 2 gets a gruesome 5 out of Five from Pastrami Nation!