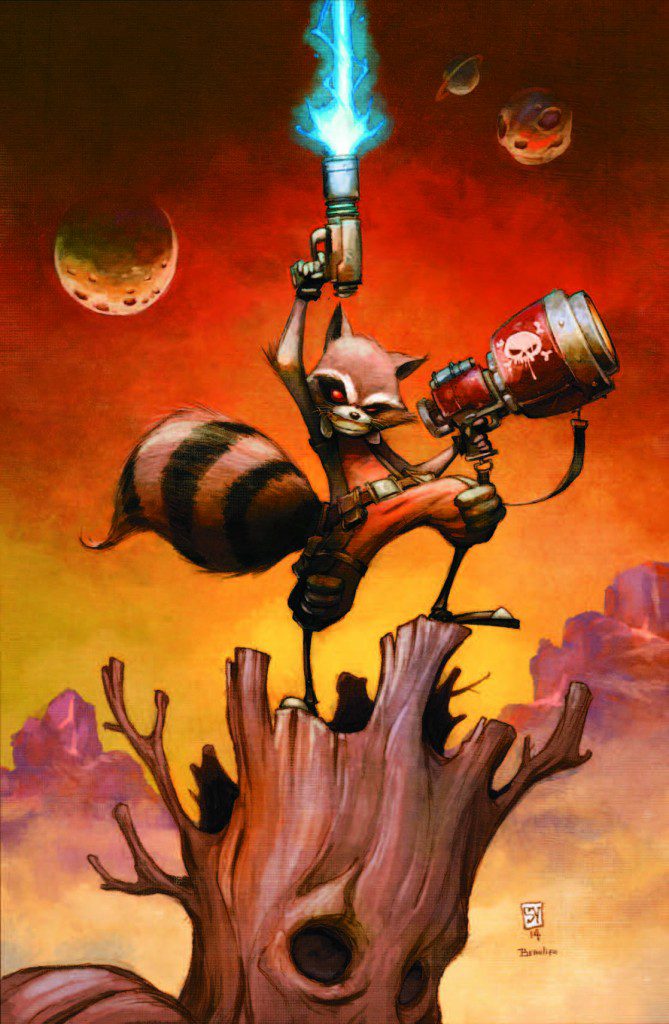 He’s small, he’s furry, and he’s a part of this summer’s most anticipated film, The Guardians of the Galaxy. How can life get any better for Rocket Raccoon? How about his own series? You got it! Yet, can the gun toting, anger ridden fur-ball hold his own as the lead character? If issue #1 is any indicator, then yes, yes he can.

Having his debut way back in 1976, this is definitely the year for Marvel Comic’s Rocket Raccoon. As a member of the ‘heroic’ Guardians of the Galaxy, Rocket has faced down some of the universe’s greatest threats, and lived to tell about it. For this first issue, we see Rocket being, well, Rocket: he’s battling it out with intergalactic police, crashing an alien wrestling match, while all the time, winning over the ladies.

Skottie Young, best known for his work on the Oz series of comics with Marvel, does both the writing and artwork, and does so masterfully. The character is fun, and so should his book, and Young makes sure that the laughs are there, the energy is cranked up on each page, and by the end of the book, you end with a smile, waiting to see what happens next to everyone’s favorite space raccoon.

I didn’t know what to expect when I picked this up: I am a fan of the Guardians of the Galaxy, but didn’t know if a book based solely on Rocket would fly. Even though the Guardians to make an appearance, this is clearly Rocket’s book, and I am on board for the journey. I give Rocket Raccoon #1 a fantastic FIVE out of FIVE.