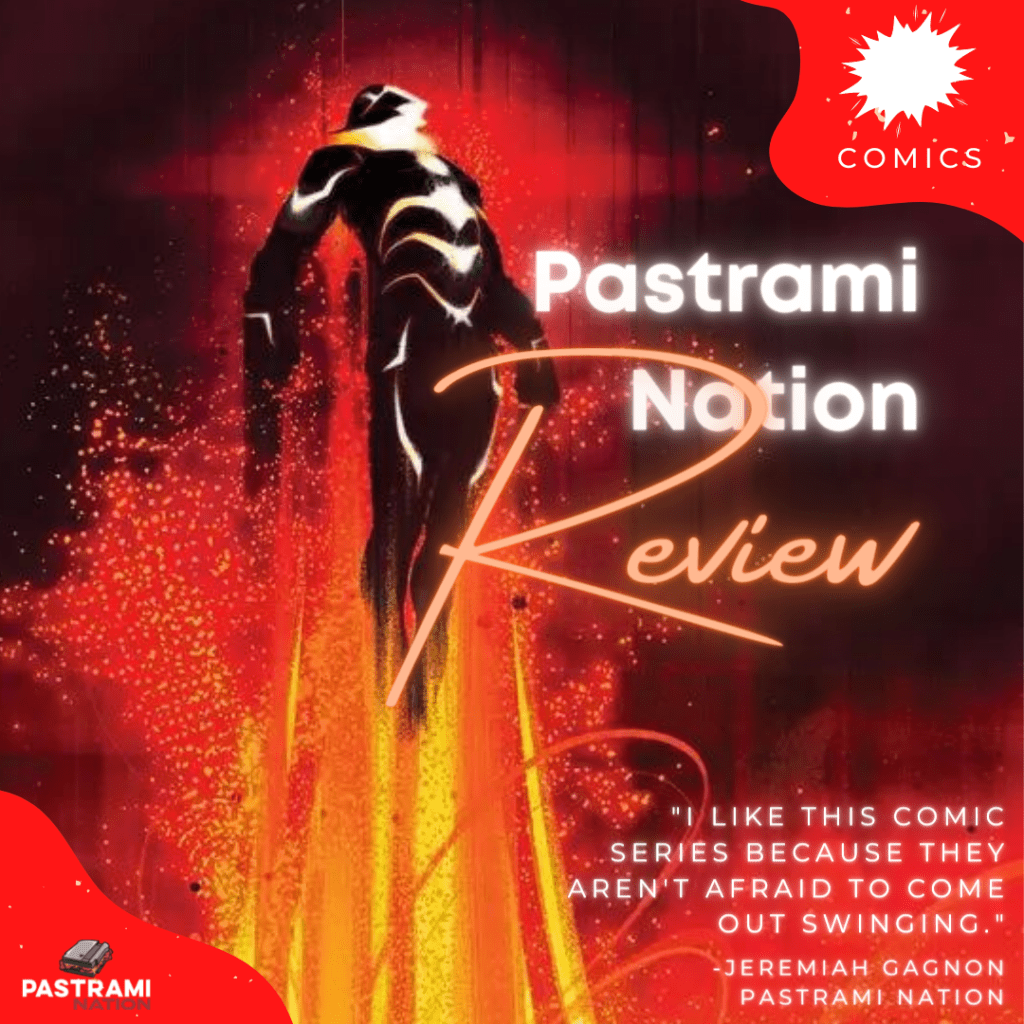 My initial thoughts after seeing the cover are that the costume looks like a cross between Iron Man, Batman, and The Human Torch, with a touch of The Mandalorian.

At the very start, we see Rogue Sun beating the snot out of a hooded figure in the city of New Orleans. Rogue Sun sends the mystery figure flying into a building and gets surprise attacked, and beaten to a pulp.

One week after the fight, we are shown the scene of Crescent City High School. We see Dylan, a tough-looking guy who is showing his “best friend” Byron some tough love. After unsuccessfully flirting with a girl named Van, we cut to Dylan’s home, where he is complaining about the food to his mother. She calls Dylan into the living room where Mr. Abernathy from Cotton, Simmons, and Gardner Law Firm is discussing the death of Dylan’s father, Marcus Bell, and his will. We cut to the reading of the will where Dylan is in for a big surprise and one he would never have expected…

The rest of the comic book is an origin story different from any I have seen before. It was a nice change of pace from the tried and true “someone close to me died, and now I am a superhero because of them,” like we get with Spider-Man and Batman or many other mainstream superheroes. While the protagonist’s dead father is the reason for this new superhero, avenging his death and doing it in his memory is not why Dylan becomes a SuperHero.

I like this comic series because they aren’t afraid to come out swinging. We have a superhero who isn’t afraid to throw hard punches to protect his city. Despite his ability to fly, super strength, and fire powers, we are shown that he still has exploitable weaknesses; his overconfidence and underestimation of this new foe is his ultimate downfall. Within the first couple of pages, this powerful hero is taken down. We then are shown the protagonist of the series “Dylan,” a troubled teenager and a trouble maker. He lives with a single mother and then finds out his father died and later discovers his dad was the Super Hero’ Rogue Sun’. Within a few lines of dialogue, it was evident that Dylan had underlying issues with his father. His first foray into crime-fighting goes about as well as you might expect for a first-time masked vigilante, and that’s when the big twist of this single issue comic comes out.

I also like that there is what feels like a reference to another superhero that helped to inspire the writer. Another really cool thing is after the story ends, the writer included a letter to us, the readers, about how he got into writing, where the story of Rogue Sun came from, and where he comes from. This is a comic book written by a comic book enthusiast for comic book fans.

The artwork is also really well done. While not overly detailed and not simplistic. It feels like a cross between hand-drawn and digital art. Every detail feels right, from the buildings and things that aren’t the focus to the characters. There are even a couple of panels where we see things from the street perspective and get to hear what the people think about what is going on, which is really cool to see. I can’t recall many if any comic books where we see glimpses of the superhero fight from the ordinary folks’ perspective, and it brings a nice touch to what is going on. They do really well on the transitions between scenes, too, easily telling us the scene we just finished reading is over, and the next one is beginning without being awkward about it.

I can’t say there are many things I didn’t like about this book, but there are a few.

When the first Rogue Sun dies, it isn’t quite obvious to me that he did die. There is no blood, no panel showing the hero being killed, or even broken bones. While I figured that is what happened, I didn’t find out until the scene where the lawyer breaks the news to Dylan and his mother. One moment the hero is being held up on the brink of death, then BAM, we see him sitting in a pile of rubble, looking really beaten up. They do show his fire going out on the next panel, but it wasn’t obvious to me that he died just from that. I understand that this series is all about Dylan and how he grows as a person and crime fighter. I think it would have been nicer for the first book to show us more of Rogue Sun (the father) being a superhero so we would better understand who Rogue Sun is and then ended with Dylan’s surprise. We could have seen what Dylan’s day-to-day life is like, what his relationship with his mom starts as, and who Dylan is as a person. Dylan seems like a bully to his “friends” and a player to the girls. Maybe that is how Dylan is supposed to start out as, not the frail teenager who then becomes great but the trouble-making youth with personal issues who learns how to become a better person. If that is the former is the case, I am all for it; however, with what we see, I cannot tell if that is what the creators are going for. Only time will tell when we see more books in the series.

Overall I enjoyed reading this. This seems like a story that will be worth reading and to keep up with. They don’t hold your hand and provide little details here and there to show us that there is more going on in this world than just what we see. I have questions that I hope will be answered as the story progresses: who is Mr. Abernathy, and why does he know Rogue Sun? What is Rogue Sun’s power set? What are his weaknesses? Who are the supervillains who mask themselves and have gone toe to toe with Rogue Sun in the past? How will Dylan learn to control his new found powers? I am eager to know the answers and see how deep Rogue Sun goes.

Jeremiah Gagnon is a happy-go-lucky goofball of a guy with a passion for all things Superheroes, D&D, and Comic Books. Gagnon is an amateur Magician as well. He currently lives in New Mexico. You can follow him on Facebook, YouTube at PressXForAwesome, Instagram @unicyclezombie, Soundcloud, and TikTok @magic_man95