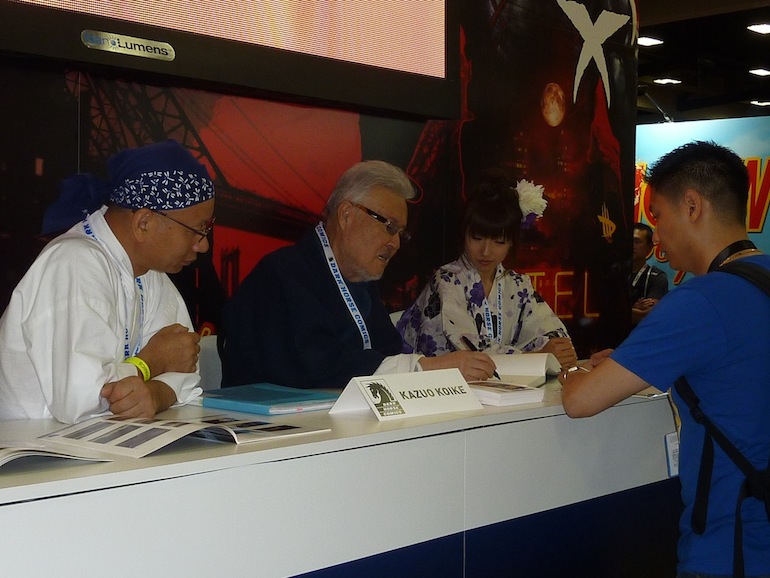 (San Diego)— This past week was the mother of all conventions, and it all took place in sunny San Diego. Comic Con International, also known as the San Diego Comic Con, once again took over not only the San Diego Convention Center, but much of the historic Gaslamp District as well.

Fans, professionals, vendors, actors, directors, and more all swarmed to the sunshine state for the largest pop culture gathering in the world. Though named Comic Con International, the show has turned into a pop culture magnet, boasting booths featuring film studios, video game publishers, entertainment channels, and of course, comics. Marvel and DC Comics both dropped some bombshells in regards to their film universes: Marvel not only provided more details on their 2014 film, Guardians of the Galaxy, but also announced the name of the next Avengers film: Age of Ultron. With DC, the news was that the new Man of Steel film will have Superman battling the caped crusader himself, Batman.

One booth had a different kind of hero: imagine an 88-year-old retired assassin that could kick butt with the best of them. That’s Agent 88, a film by creator/director Digger T. Mesch and starring Kay D’arcy as the elderly assassin. The film was a Kickstarter project that was successful in it’s funding and promises a martial arts filled good time.

A staple at comic con is always the cosplayers in their extravagant costumes and always willing for one more photograph. This year had no shortage of amazing, and sometimes weird, cosplayers, walking the convention floor for the five-day event. From Batman villain’s like Poison Ivy to the longstanding Doctor Who, who just celebrated its 50th anniversary, the hard work and dedication put into the costumes could be seen at every seam.

Of course, what is a comic con without comics? Marvel and DC both had their massive booths, which always draw in a crowd, but they weren’t alone. Image Comics brought in crowds of people with their signings with the creator from The Walking Dead, Robert Kirkman, as well as with Eisner Award Winning Writer, Brian K. Vaughn, known for his immensely popular book, Saga. Dark Horse Comics featured a rare signing with Lone Wolf and Cub creator Kazuo Koike. Lone Wolf and Cub is a manga that has stood the test of time, having been created in the 1970’s with a massive following today.

The event is known to tire out even the most seasoned of veterans, as there is something interesting and creative at every turn. For more information on Comic Con International, feel free to visit them online at www.comic-con.org.