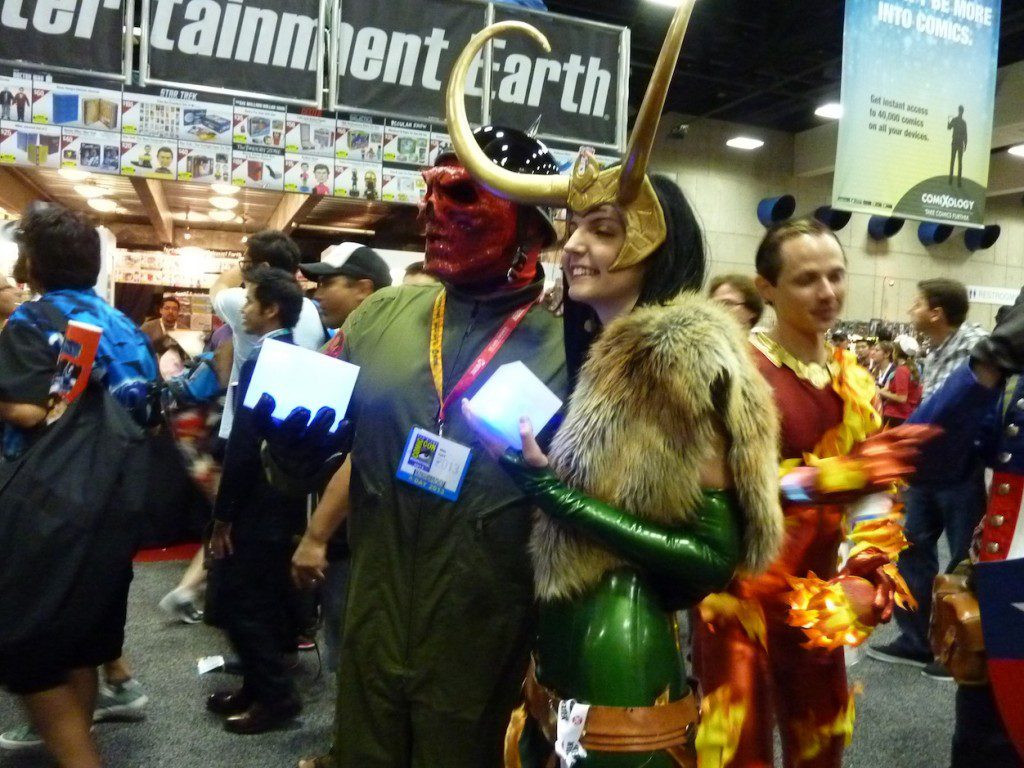 (San Diego)— With the San Diego Comic Con now behind us, it’s that time to look back at the plethora of pictures from the pop culture event of the year. Many of those pictures probably feature some of the amazing cosplay attendees with their elaborate costumes that make the heroes and villains from the comic books jump off the page. But how is it for those people that are stopped every few steps for a picture? How is comic con through the eyes of a cosplayer?

For 22-year-old Heather Maioli, it was an amazing experience. The Rochester, New York resident, who is an Autopsy Technician by day, took to the convention floor as the female version of the God of Mischief Loki from the Marvel Universe. A lifelong fan of comics, especially Thor, seeing actor Tom Hiddleston portray the villain in the Thor and Avengers films revitalized her love for the evil Norse god. In standing in one of the many lines of comic con with her, I saw just how crazy it is to be a cosplayer at the biggest show of the year. While in line, Maioli must have been stopped every few steps, and she smiled the whole time, taking pictures with everyone. This wasn’t her first convention, but it was her first San Diego Comic Con. So, how was the experience?

“Being noticed at the largest convention was a surreal experience—I never expected the kind of reaction I received,” said Maioli in an interview after the convention. “I had always gone to small local conventions and was no stranger to getting photographs taken, but San Diego was a whole other experience. I had never been interviewed in my life, and suddenly people from Syfy and Viz Media wanted to talk to me—so it was both exciting and scary. In the end, I was really grateful for the reaction I received because I had spent a lot of time and money on the cosplay, and I was happy it all paid off! All the hours in the gym were finally worth it!”

Maioli spoke about her history of cosplay, which goes back further than some might think. “Looking back on it now, I think I was cosplaying before I even knew what it was! There are many pictures of me as a little girl dressed up as Sailor Scouts, Jedi Warriors, and X-Men characters—but I started doing cosplay for conventions when I was in high school, when funds allowed me to travel and wear more elaborate costumes. Cosplay for me has always been a way to express a love for a character and to step into another life for a day. My everyday life is decidedly not very glamorous, but cosplaying allows me to experience a more exciting life for a day.”

But with all the positives, there must be some negatives, right? “Saying that the costume was uncomfortable is an understatement. The body suit and gloves were both made out of latex, which is a material that doesn’t breathe. There were a couple of times where I had almost passed out from becoming overheated and dehydrated. The horned tiara also hurt—digging into my forehead and leaving a nice, bright mark—and the high heels were atrocious. I still haven’t regained feeling in some of my toes. I am convinced that cosplay exists to demonstrate how impractical many of these comic book costumes really are—especially for the women. Other than being uncomfortable, there were no downsides to the costume. I am very happy I decided to dress up to Comic-Con, and would do it again in a heartbeat!”

Maioli plans to attend next year’s San Diego Comic Con, as long as she is able to get a ticket. She will be attending the Toronto Fan Expo this year, and may be going to conventions in Japan as well. Her future costume plans include Mystique and Sif, both from Marvel Comics.

1 thought on “Journey Into Mystery: A Cosplayer’s Comic Con Adventure”