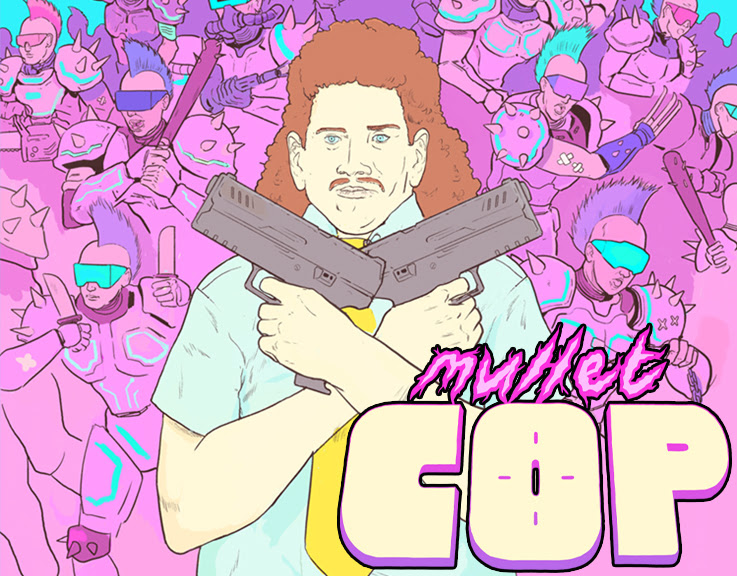 After a near-death experience, a mall cop goes undercover as a manager at an all-you-can-eat buffet. With the help of his coworkers and a supercomputer/microwave called M.I.T.T. (Mall Industries Two Thousand), he takes on crime boss Robogrannie and her gang of thugs.

James Butler has sold projects to MTV and Comedy Central, and is currently a writer on Hulu’s ANIMANIACS/PINKY & THE BRAIN reboot. Along with Mullet Cop, James and his frequent collaborator, Jon Scott, are also currently developing an action feature with SR-48 productions.

Tom Lintern is an illustrator and storyboard artist with clients in the publishing, video game, and advertising industry. His clients have ranged from Penguin Books and Simon & Schuster to ESPN and McDonald’s. Lintern wrote and illustrated his first comic book series GIRRION in 2015 and MULLET COP in 2021, both published by Scout Comics.

“Tom’s comic is original, funny and totally irreverent,” James Butler said. “It’s filled with nostalgia while also being topical in its portrayal of an insatiable capitalistic society. But what’s really important is that the main character is an undercover cop who has a wicked mullet, fights robot-grandmas, and gets his mission information from a super-computer microwave.”

Lintern added, “It’s quite a transition to go from working solo on this story to collaborating with such an amazing group. This team is going to make something absolutely hilarious.”