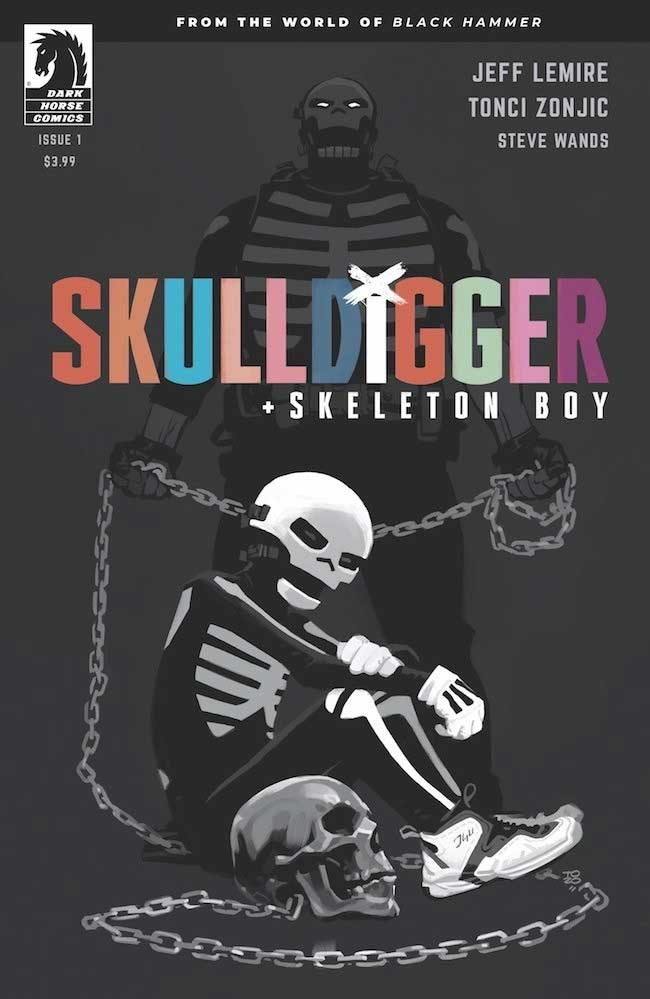 Skulldigger and Skeleton Boy #1 Review: The Dark Side of Heroes

It is no secret that I love Dark Horse Comics, Black Hammer. Not only that series, but every spin-off series that has come from the Black Hammer universe has been amazing. So now, from the world of Black Hammer comes Skulldigger and Skeleton Boy.

From Jeff Lemire with art by Tonci Zonjic, we meet a few new faces in the Black Hammer universe. The big one being the anti-hero Skulldigger. A violent, hulking human with a metal skull on a chain as a weapon, we see him save a young boy from a killer, moments after the boys’ parents were shot dead in front of him. After dispatching the killer, we see how the two worlds go, and how they end up intertwined once again. Skulldigger is hated by the cops, as they are desperate to have a solid reason to bring him in. The boy is traumatized and sent to the psych hospital after going non-verbal with the police.

The story is seemingly told from the perspective of the boy, with a twist sentence at the end that leads us to believe the two won’t get along for long. This is the most violent of the Black Hammer books so far, and I am really digging it. Lemire gives us a new layer of his universe, and the art is spectacular. Very grim. Very expressive.

I really enjoyed this first issue. Though it seemed kind of short to me, I can’t wait to see how these two coexist and eventually implode.

Nolan Smith
0
Tags :
Skulldigger and Skeleton Boy #1 Review: The Dark Side of Heroes