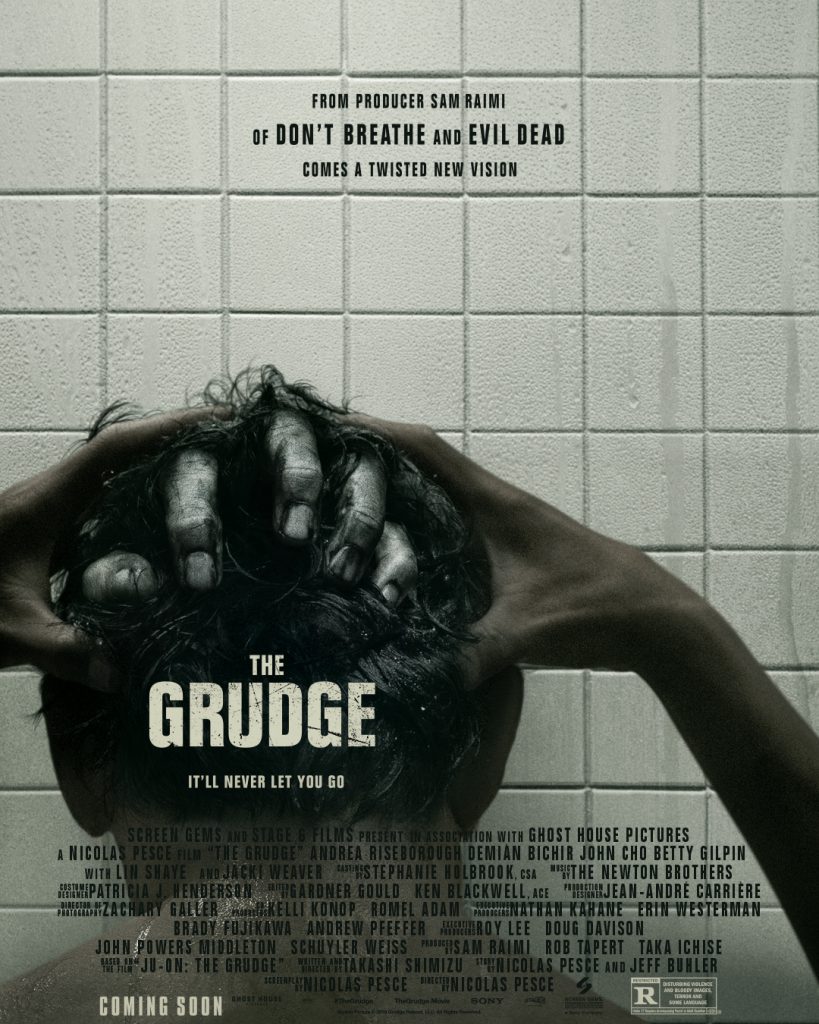 “When someone dies in the grip of a powerful rage… a curse is born. The curse gathers in that place of death. Those who encounter it will be consumed by its fury.” This is the basic premise of the Japanese horror film Ju-On: The Grudge. That idea carried on into the 2004 American remake of the film starring Sarah Michelle Gellar called The Grudge. And now in 2020, we have a new version of the story, also called The Grudge, and as you can probably guess, the premise is the same.

And the truth is, it’s not nearly as good as earlier films in the franchise. In fact, it’s pretty bad.

While I want to give this movie credit for trying to do something different with its story, it happens to be one of the films many missteps. The story this time revolves around a couple of detectives as they try to solve the crimes associated with The Grudge. Detective Muldoon (Andrea Riseborough), a single mom who is new in town, is partnered with hardened detective Goodman (Demián Bichir). Together, they come across an odd death, which is related to one of Goodman’s previous cases, a case he would rather forget. As Muldoon gets closer to the truth, she also gets closer to the curse, which puts her son and everyone else she knows in danger.

Previous Grudge films have focused on the families affected while they are putting the pieces together. Having it be a detective this time around makes it more tangible that they can solve the mystery. The main problem is that the film can’t decide if it wants to be horror or police procedural. It has elements of both, and both are done pretty well, but they never meet in a satisfactory way. It is possible to combine both genres, a great example being the 1998 thriller “Fallen” starring Denzel Washington. That film struck a perfect balance between detective drama and horror-thriller that worked to a degree this film can only wish to accomplish.

At a mere 94 minutes, the movie sluggishly moves along; there isn’t much momentum in the story. There are four different storylines to follow here, and you would think that would be plenty of material for the film to explore in its short run time. It slowly unravels the stories of those involved, but rarely the interesting parts. It dances around the horror in an attempt to make you care for the characters, which never happens. In one of the most blatant displays of manipulation I have witnessed in a movie, children and the unborn are used to build sympathy from the audience, and that’s not a good sign.

…and here comes a jump scare! Yes, plenty of jump scares. And that’s fine; I can appreciate a good jump scare. The problem here is that you see them all coming — every single one. There is no question about “if” they are coming, but a matter of “when” they are coming. Is a bathtub full of dirty stagnant water? An open closet in the middle of the night? A dark room lit by the computer screen you are researching on? Guess what’s coming to get you?? That’s right! The Grudge! That’s what!

With all of that being said, there are a couple of things that I liked about the film. The performances are really good. The cast is into it, there just isn’t a lot to work with. There are some really interesting editing choices that I liked, and the score by The Newton Brothers was very atmospheric. Other than that, though, there sadly isn’t much to enjoy here.

Produced by Sam Raimi, Robert Tapert, and Takashige Ichise, the trio responsible for the original remake, the new film tries its hardest to scare you, while also trying to juggle a lot of different story ideas and genres. It doesn’t accomplish any of it. As a horror fan, it’s disappointing. If you are thinking about checking this out, your better off renting the original. Or even the 2004 remake. Or anything else. Just avoid this.