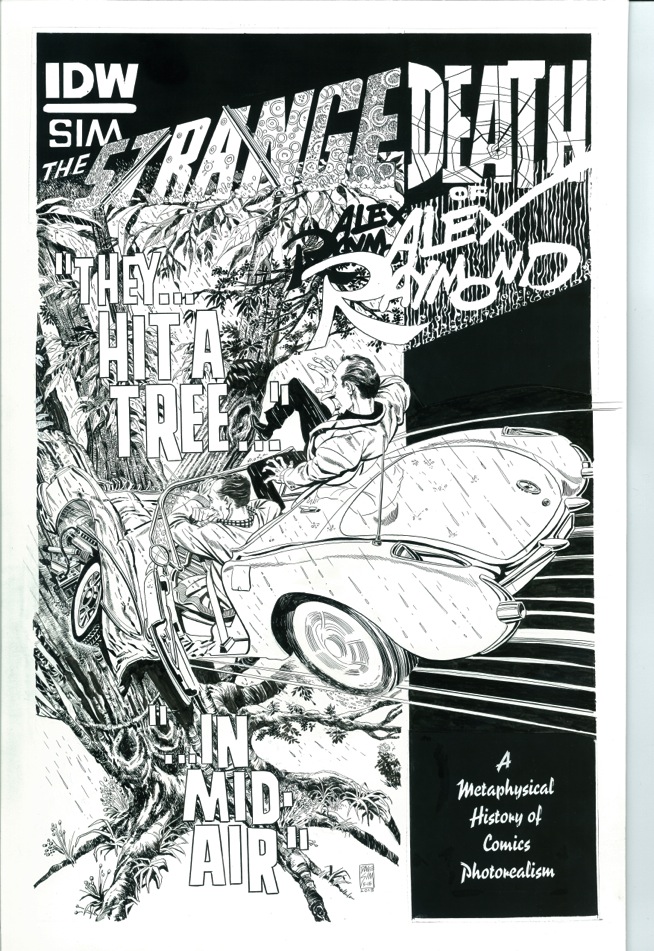 Something Strange From Dave Sim and IDW!

(San Diego)– Prolific creator Dave Sim’s meta-adventure through the history of photo-realistic artwork, the career and death of Alex Raymond, and much more, will be published by IDW! Sim’s originally self-published work is being completely remastered, redrawn, and reworked before it sees release as its own 18-issue series.

About the project, the A Moment of Cerebus Web site said: “Originally serialized within the pages of the self-published Glamourpuss #1-26 (2008-2012), The Strange Death Of Alex Raymond is an as yet uncompleted work-in-progress in which Dave Sim investigates the history of photorealism in comics, specifically focusing on the work of comic-strip artist Alex Raymond the circumstances of his death on 6 September 1956 at the wheel of fellow artist Stan Drake’s Corvette.”

“It’s not much of a secret that we’re big Dave Sim fans at IDW,” said Ted Adams, Publisher and CEO. “He’s done an absolute ton of covers for us lately, each one more dynamic than the last. Add in the other Sim projects we have in the pipeline, such as the Complete Book of Cerebus Covers, the digital/audio version of High Society and The Complete Zootanapuss Artist’s Edition, the time seemed right to launch a full blown creator-owned title and take our relationship to the next level.”

Dave Sim’s distinguished career in comics began with his self-published hit Cerebus. An essential series that evolved through grounded and mature subject material, Cerebus is a modern classic that catalyzed Sim’s career as well as the comics industry on the whole. As a vocal proponent of self-publishing, Sim has spent much of his career improving and exploring his craft through his own self-published projects. More recently, Sim has contributed his iconic style to various covers at IDW, including The Colonized, T.H.U.N.D.E.R. Agents, and Doctor Who.

IDW is pleased to explore new territory with Sim on this personal and important project, The Strange Death of Alex Raymond.