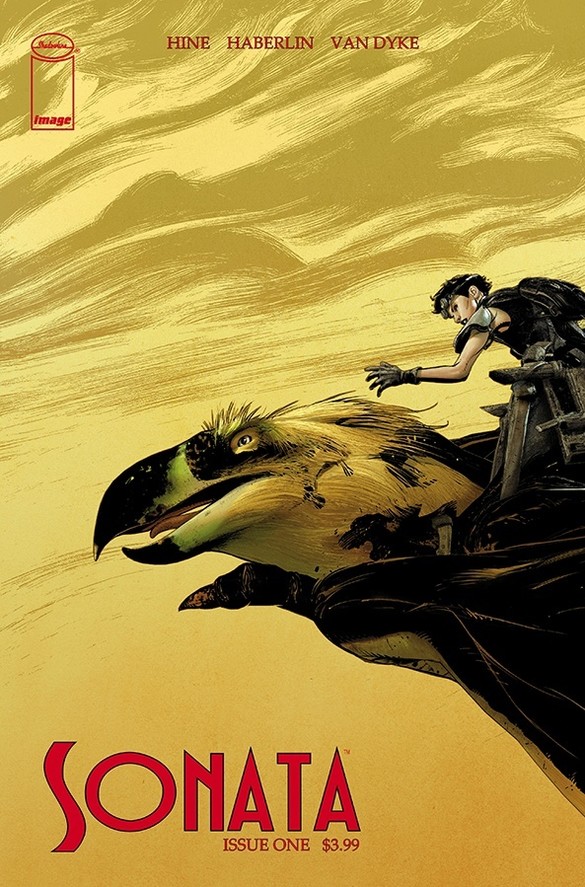 I personally always enjoyed a story that involved planetary travel and imagining the different kinds of creatures that could exist outside of our small planet. Would there be any wars, famines, or would those planets with it hosts be thriving in peace? Sonata #1 comes in with a story set on exploring those thoughts. Published by Image Comics, written story by David Hine and Brian Haberlin, Sonata starts with the introduction of planet Perdita and its new colonists the RAN’s.

First, I’d like to say that I enjoyed the art of Brian Haberlin and also the colors provided by Geirrod Van Dyke. Just the front cover and its details on the character sparked my attention and interest. Right away, we are introduced to Sonata a young girl who is part of a group of colonists who have come to planet Perdita because of its seemingly unlimited resources; they are from planet Ran. We can see that she is very close to her flying Thermasaur name Kee, who for fans of Final Fantasy reminded me of a more intimidating Chocobo that flies.

The story develops by introducing the indigenous inhabitants of Perdita the Lumani who have befriended the people of Ran. Also, on the planet are the Tayans who are now threatening the peace and also the ecosystem that the Lumani and Rans depend on. This has the potential to start a war on the once peaceful Perdita. The planet has already demonstrated some very intriguing mysteries such as the Sleeping Giants and the ruins of what seems to be a long-lost advance civilization yet to be explored by the Rans. So far all I really want to know is who and what are the Sleeping Giants, apart from the Rans and Tayans animosity, it seems that the giants will be a BIG problem in future issues.

I’m looking forward to the next issue of Sonata. The writers did a great job at being able to highlight personality traits of each character, making them all very different and also memorable. I’d like to see what the polar opposite leaders, Matari of the Rans and Kantor of the Tayans, do to keep both their people alive and survive the planet Perdita.