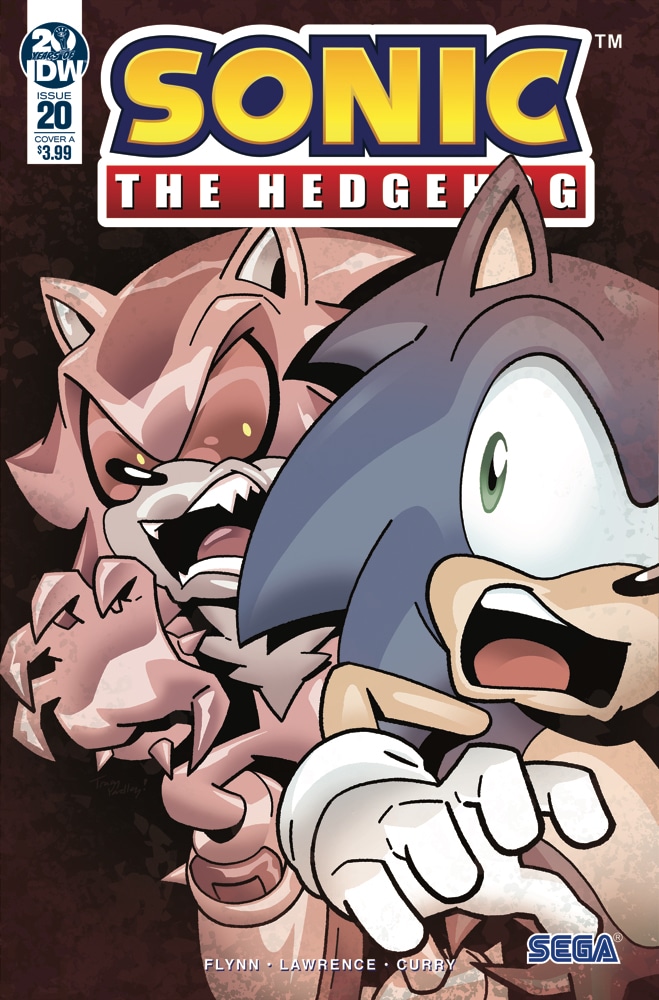 After only reading the first page, I am already excited about what promises to be a zombified adventure for our speedy blue spiked friend. Not only does it show a map of all the cities; it also indicates which ones have fallen and where each of our heroes are during the events of the story. It also manages to capture my attention with “The Story So Far…” introduction.

The introduction nicely captures the bare bones of what has already transpired throughout the last 19 issues. Of course, Dr. Eggman is up to his old tricks again, only this time with his “Metal Virus.” Think if Metal Sonic could infect someone to become the “Metal” version of themselves, only they would be zombie-like. This brings up a question, Would Sonic be able to survive Shadow the Zombot?

Right out of the gate as the adventure unfolds we see Sonic trash-talking a zombotified Shadow The Hedgehog who in turn is choking Sonic against a truck, zombots are lingering in the background. Ruge is seen frozen in shock as she is witness to what is about to happen. Smoke is seen Covering most of the otherwise blue sky.

The way Sonic moves is incredible, and just when you think something is going to happen. WHAM! They Change Things up, and things go a slightly different direction.

You can always count on the quick come back humor from Sonic as he never fails the one-liner. He still manages to keep things real, though.

I am not used to seeing Sonic fight with his hands and feet, and I thought the little change-up in combat to be quite pleasing. The battle between Sonic and Shadow managed to play to both characters strengths, while it always seemed like a fair fight. During all of this, Sonic’s infection is starting to grow more and more.

There is another Hedgehog that joins the fray as well as Few other classic Sonic The Hedgehogs Rouges Gallery. That helps him out in the beginning.

The rest of the comic plays out like a classic Zombie story. The good guys are trying to survive and rescue Other survivors while combating the Zombots. Tension is high, and there are minor disputes amongst friends. These interactions reference previous issues which is great for people like me who love to buy those.

During the second half of the comic, it felt to me that Sonic had a sort of quest to fulfill. While following the journey to the letter, there was something that didn’t happen that I wish could have. This could be because the writers are saving some information for a later time.

If you have ever played Sonic The Hedgehog for the Xbox 360, then you will really like this artwork. To me, it feels as if the artistic team looked at the 3D models and then created a 2D version of that. I can easily see this kind of artwork being used as a sort animated intro to a future video game.

Overall, the artwork helps you to connect to a great story with lots of different characters to root for. There are layers of mystery abound as you dive deeper into the story. I wonder what happens next…