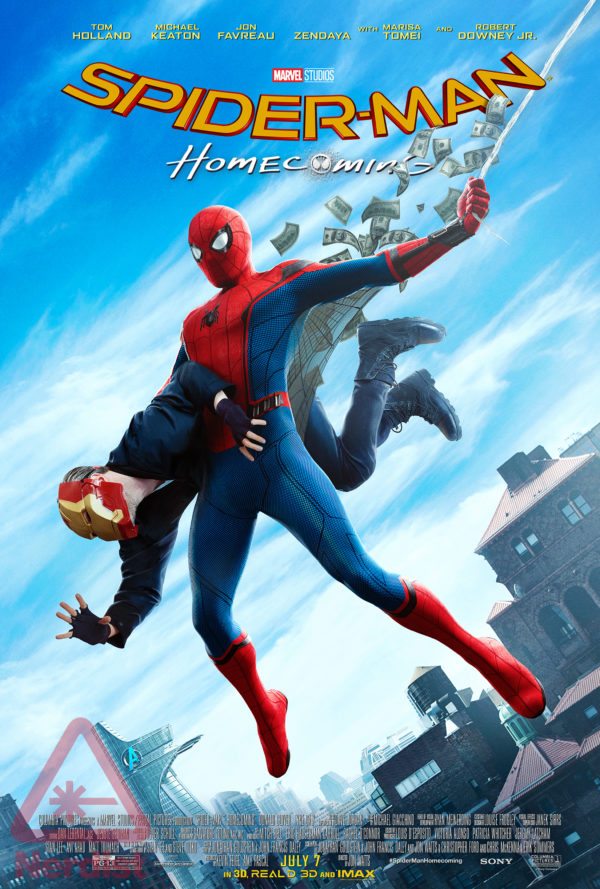 It’s been a long road for your friendly neighborhood Spider-Man. From his big screen debut in 2002 to fast forwarding to 2017, the wall crawler has had five solo films, all apart from the Marvel Cinematic Universe. But Captain America: Civil War changed all that, and brought us a new Spider-Man in the form of Tom Holland. With Spider-Man: Homecoming, we see the new Spider-Man take the spotlight. Will old web-head finally take his rightful spot among Marvel’s silver screen pantheon, or is this a homecoming you wish you had skipped altogether?

This is probably the most fun I have had with a Spider-Man film, and is tied, in my opinion, as the best Spider-Man film yet. (Tied with Spider-Man 2, in case you were wondering). Directed by Jon Watts (Cop Car), the film is very much grounded into the MCU. MCU alumni Robert Downey, Jr, who once again steps into the role he was born to play, joins Holland as Tony Stark, aka Iron Man. Jon Favreau is back as well, as Tony’s right hand man, Happy Hogan, and a mentor of sorts to Peter Parker/Spider-Man.

But it is the new cast that really shines. Michael Keaton plays Adrian Toomes, also known as the Vulture, in one of the best Marvel cinematic villains yet. Taking a character like the Vulture, who really hasn’t received the respect other villains have, and to elevate him to a mastermind level, is a great move. Keaton owns the role, and makes the Vulture a force to be reckoned with. Holland’s Peter Parker has a right hand man as well, in the form of friend and classmate Ned Leeds (Jacob Batalon), who provides the comic relief and back up intelligence. There are a few ladies in Peter’s life, including the return of a younger Aunt May, played by Marisa Tomei, Parker’s love interest Liz (Laura Harrier) and the unusual Michelle (Zendaya).

So what works for the movie? First, the fact that we see that Peter is not a perfect superhero: he’s a kid, juggling a lot in life and making stupid mistakes, like high school kids do. Holland nails the clumsy, awkwardness of Parker. I love how, by the end of the film, Peter is still not a full fledged hero: he is simply a little better than he was before. The Vulture worked great as the antagonist of the film, and brings a lot of opportunity for other villains (like the cameo we saw from the man who will eventually become the Scorpion). The movie felt very different from the other Marvel films. It was grounded, it dealt with more personal issues, and threw a heck of a curveball. Plus, seeing all the Easter eggs that tie into the MCU was a treat.

What didn’t work? Some slow moments, and a moment at the end that reminded me far too much to a scene in The Dark Knight Rises, and that isn’t a good thing. Other than that, I really enjoyed this film. Spider-Man: Homecoming is the movie Marvel needed to make. It joyfully brings Spider-Man into a world full of Avengers and Guardians, and opens the doors to even more original stories down the road. Like the role that Donald Glover plays, which could be a set up to a very cool storyline that fans would love. So make sure to save the last dance for Spider-Man: Homecoming this summer.