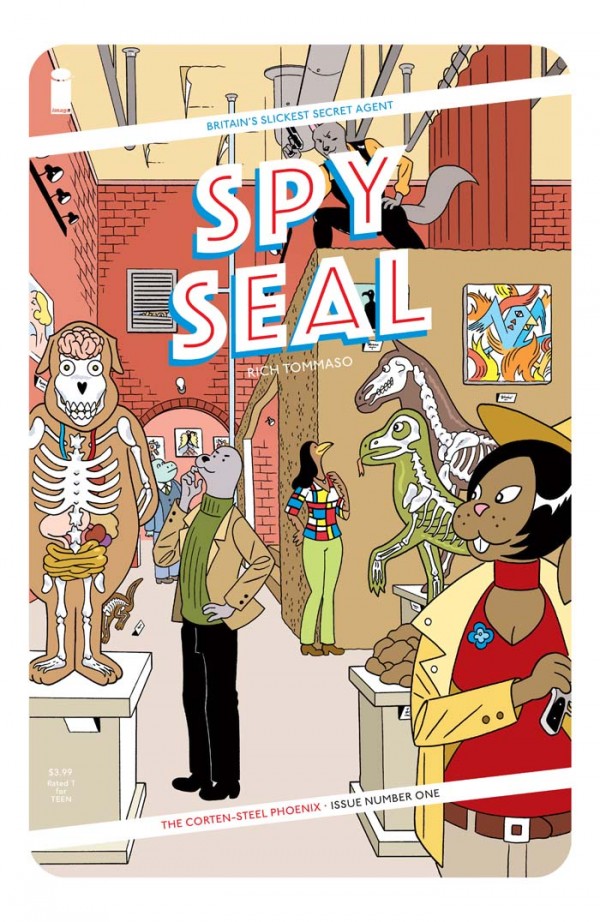 The British spy has become a bit of an archetype (think James Bond); a story that’s been told time and time again. So how can this story be given new life? How can it be told in an original and refreshing way?

Artist/writer Rich Tomasso’s “Spy Seal #1” answers these exact questions as he tells the story of “Britain’s slickest secret agent”, with a bit of a twist. The story seems to have everything required for a typical British Spy epic; a formidable protagonist, a woman that our protagonist seems to have an attraction towards, and a couple of bad men from another country for our protagonist to beat up. So what exactly makes this so different and exciting? Well for starters, you’ll see that it’s an origin story for Malcolm Warner, military veteran turned secret agent. It’s an extremely enjoyable read, with political commentary and humor added into a simple yet entertaining story that serves as an excellent introductory piece. Oh, and did I mention? The characters are all animals given human characteristics and mannerisms. That’s definitely a refreshing way to view a team of British spies. As the title suggests, our main protagonist is a seal, and he also has his good friend Sylvia, who is a bird. No doubt, you’ll have a lot of fun trying to see if there’s any correlation between the animals that and the characteristics/ mannerisms of each character. For example, Why exactly is Malcolm Warner a seal?

This particular issue serves as an introduction to our protagonist, as well as some supporting characters such as Sylvia. Tomasso does a great job of establishing the relationship between the two, and leaves us wondering what’s next for the pair of friends. Malcolm himself is received as a likeable and experienced man, due to both great characterization and natural  dialogue. You’ll be excited to see how Malcolm adjusts to his new life as a secret agent as the series continues. Not to mention, the story is backed by top notch artwork from panel to panel, as it matches the tone of the story perfectly and allows us to easily be absorbed into the world.

This is a can’t miss from Rich Tomasso and Image Comics  that’ll definitely leave you clamoring for more. Satisfaction is guaranteed with the first issue of this promising new series.