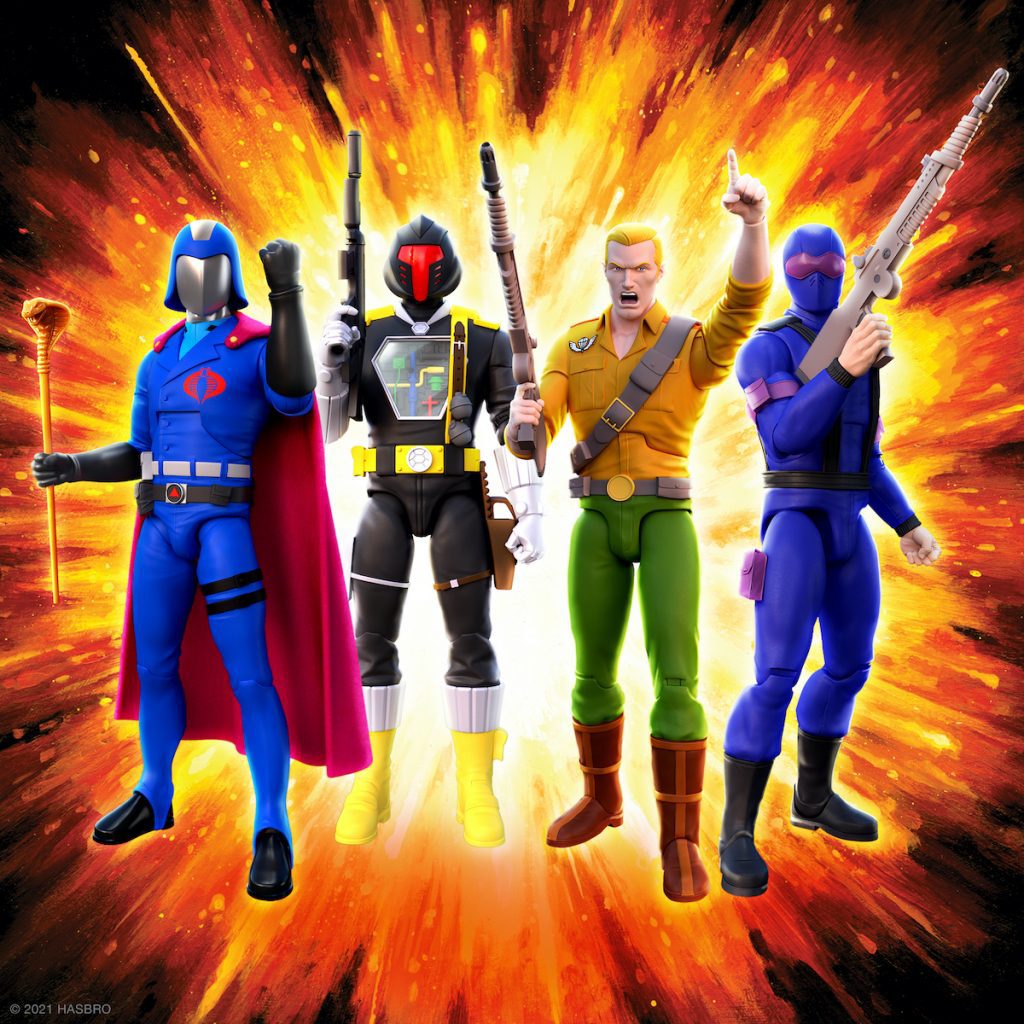 Super7 is excited to collaborate with Hasbro to bring the world of G.I. JOE to its ReAction and ULTIMATES! lines of collectible figures.

The first wave of cartoon-accurate G.I. JOE ULTIMATES! includes First Sergeant Conrad S. Hauser – better known as Duke – along with the team’s original commando, Snake Eyes. Rounding out the wave are the ruthless Cobra Commander, and the Cobra Battle Android Trooper (B.A.T.). These figures are available for pre-order directly from Super7 now through August 15 at $55 each, with the delivery of this wave expected in Spring 2022.

The first wave of G.I. JOE 3.75” ReAction is due this September, and will include Snake Eyes, Kwinn, Scarlett, Cobra Commander, Destro, Baroness, and a variety of G.I. Joe Greenshirts and Cobra Troopers to satisfy collectors and army builders alike.

“As a kid growing up in the 70s and 80s, there were a few toy lines that became unique worlds to themselves; the space fantasy of Star Wars, the technology of Tron, the robot missile firing mayhem of Shogun Warriors, and the expansive world of G.I. JOE,” said Super7 Founder & Owner, Brian Flynn. “From comics to cartoons, action figures to vehicles, G.I. JOE was one of the widest worlds of action and adventure you could imagine.”

“G.I. JOE is an important toy line in the lives of so many collectors, and to have the opportunity to delve into its history and create new action figures for collectors like ourselves is truly a dream come true.”

For those who wish to experience the Super7 x G.I. JOE collaboration immediately, a collection of items including the Super Cyborg Cobra B.A.T. figure, apparel, accessories, and drinkware are currently available for purchase on Super7.com.

Additional waves of G.I. JOE figures can be expected later in 2021 and beyond.

Super7’s super articulated ULTIMATES! 7” scale figures are the premiere fan product. They are made-to-order figures that come with a huge assortment of extra features, making them the most exceptionally intricate expressions of the character that can possibly be made.

ReAction Figures celebrate the iconic action figure of our childhood. The unique size and sculpting style was simple while allowing the imagination to go all in on daily adventures. With ReAction Figures, Super7 continues the classic action figure style while making the figures we wished we had while growing up.