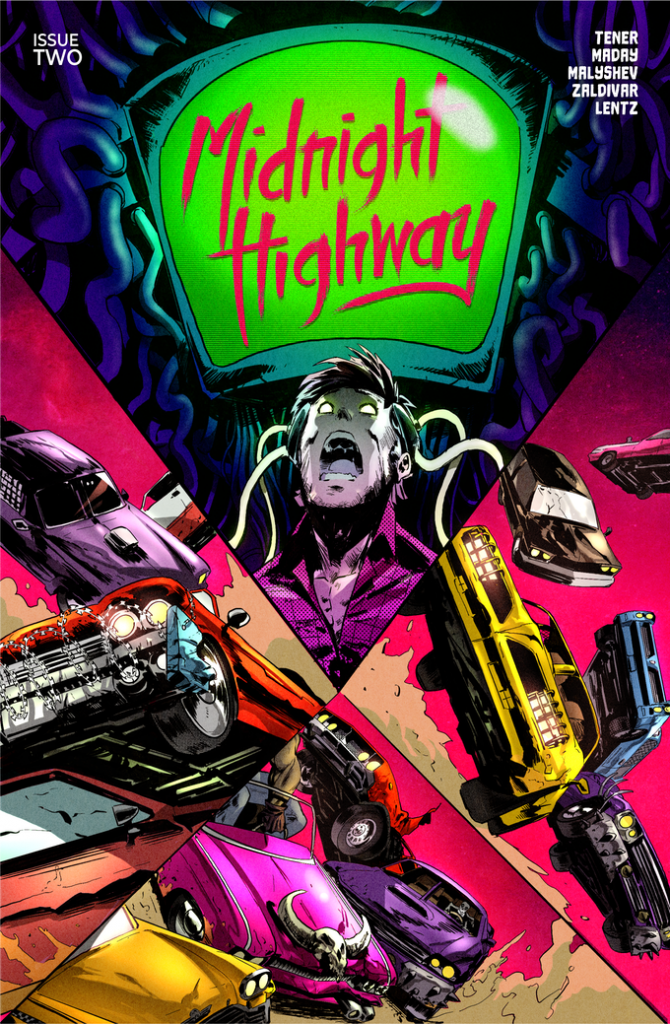 Comic book writers Mike Tener and Alex Maday (the creators of Midnight Highway) are returning to Kickstarter on July 14th for MIDNIGHT HIGHWAY #2.

Joining them for another round of ceremoniously weird horror is artist Alexander Malyshev, colorist Hedwin Zaldivar and letter Dave Lentz.

MIDNIGHT HIGHWAY #2 is perfect for fans of the type of creepy horror that excites and terrifies you all at the same time. Fans of Tales from the Crypt, Stranger Things, The Thing and In the Mouth of Madness are just some of the many notable works this release will appeal to. We’re convinced this latest instalment of MIDNIGHT HIGHWAY has the potential to make even John Carpenter’s hairs stand on end.

Here’s what the Comic Book Industry is saying about MIDNIGHT HIGHWAY:

“Like all the best horror yarns, Midnight Highway starts in the normal world, then detours into a world of surreal weirdness and terror, with mutation, strange messages, and ghostly apparitions acting as hideous signposts along the way!”
– Cullen Bunn (Harrow County, The Sixth Gun, Basilisk)

“A fast-paced and savagely drawn monster thrill ride that’ll leave you on the edge of your seat. Buckle up and take a ride on the Midnight Highway today!”
– David Pepose (Spencer & Locke, Scout’s Honor, The O.Z.)

“Vibrant colors and surreal artwork pulled me into a quirky thrill ride through a long night! …Enioy…if you dare!”
– Jay Sandlin (Neverland, HH Holmes, Over the Ropes)

“A twisted introduction to your new horror obsession. The Midnight Highway is a road every fan of the macabre will want to travel.”
– The Amazing Nerd Show Podcast

The MIDNIGHT HIGHWAY #2 Kickstarter campaign boasts a wide range of crowdfunding support tiers for horror fans looking to sink their teeth into. From Holofoil covers to 3D artwork and T-Shirts to VHS Covers (yes, you read that right). Support this Kickstarter Campaign by heading to: https://www.kickstarter.com/projects/williamtener/midnight-highway-1-2-an-80s-inspired-sci-fi-horror-comic