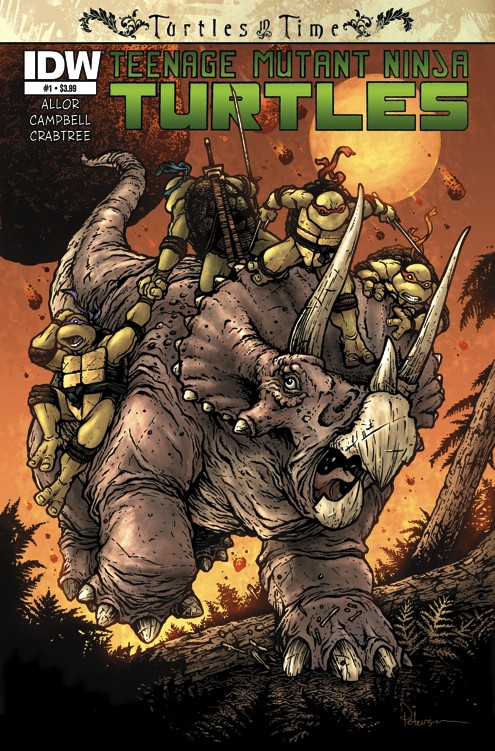 Looking for a good comic to read? Are you a fan of Teenage Mutant Ninja Turtles? How bout dinosaurs? If you’ve read this article up to this point then I’ll take that as a yes. With that being said it’s time…for Turtles in Time!

New from the good folks at IDW Publishing is a brand new Teenage Mutant Ninja Turtles mini-series titled “Turtles in Time”. Exactly where in time is pretty much given to us readers no matter which of the three different cover variants you choose, all featuring our half-shelled heroes in the clutches of some kind of dino. That alone was enough to lure me in.

The story, written by Paul Allor, starts off with the four turtles trying to outrun a stampede of dinosaurs in a prehistoric setting, only to find out that the big lizards themselves are being pursued by other dinos with Krangs attached to their backs controlling them. Beautifully illustrated by Ross Campbell, this is one action packed, dino driven TMNT adventure that’s definitely worth checking out.

It left me waiting to see what happens next, hopefully it will have the same affect on all of you. I give TMNT: Turtles in Time #1 a perfect 10 out of 10.