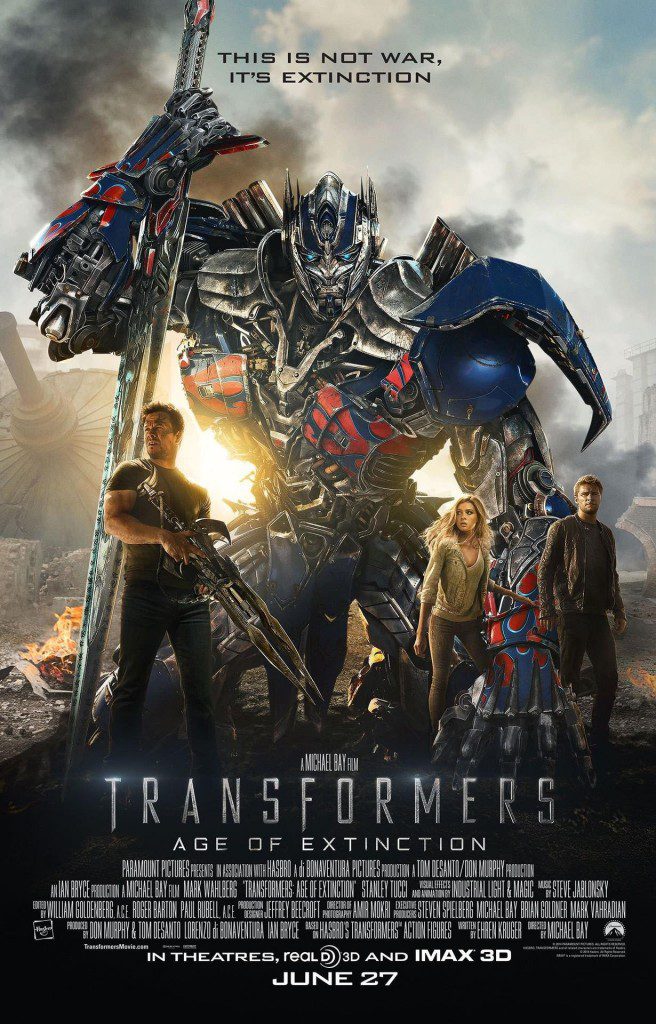 (Victorville)— In 2011, we were given Transformers: Dark of the Moon, which I felt was a hug misstep for the franchise. As the build up for Transformers: Age of Extinction built, the word going around is that this would be a new start, a step away from what made the previous film fall short. Did this latest film reclaim the glory of this coveted 80’s franchise, or did it make the beloved robots extinct to the audience?

The film, once again directed by Michael Bay, takes place years after the previous film, as the landscape of the world has changed. Humans no longer trust the heroic Autobots, as both robot factions are deemed aliens and enemies against Earth. The human protagonist this time around is tinkerer/inventor Cade Yeager (Mark Wahlberg), a single dad doing all that he can to raise his high school senior daughter Tessa (Nicola Peltz). Things change when he finds a Transformer abandoned, but not just any Transformer, but Autobot leader Optimus Prime (Peter Cullen).

Joining Prime this time around are a slew of new Autobots: the grizzled, cigar chomping Hound (John Goodman), the sword wielding Drift (Ken Watanabe), and the gun toting Crosshairs (John DiMaggio). The villains this time comes in the form of multiple faces: from the galactic bounty hunter Lockdown (Mark Ryan), Galvatron (Frank Welker), and the human threat of the CIA’s Harold Attinger (Kelsey Grammer). The plot focuses on around the ‘threat’ of Transformers on Earth and how Earth battles back.

Unfortunately, the story gets so lost, it becomes less and less entertaining as the massively long film goes on (it clocks in around 3 hours). The one thing I wanted to see the most, Transformers, played the back seat to some incredibly horrible human characters, like the eerily creepy boyfriend of Tessa, Shane. Throw in one of the most obnoxious characters in the film, Savoy, and you have some cringe worthy moments. I am a fan of Wahlberg, but even he couldn’t save the poor writing here. On the other hand, I really enjoyed most of the robot scenes, as characters like Prime and Hound really stole the show.

Maybe I am getting old, but this movie just wasn’t enjoyable to me. I was literally waiting for it to end. Yet, most of the crowd at the opening showing cheered the whole movie and loved it. I love the Transformers; I have since the original cartoon. This, to me, is more of the same that we saw with Dark of the Moon, which is not a good thing. A long, slow, human centric movie, you will probably see this regardless of what I say, and you should. Some will love it, and some, like me, will continue to wait for the Transformers to get the respect and movie treatment they deserve, because this isn’t it.