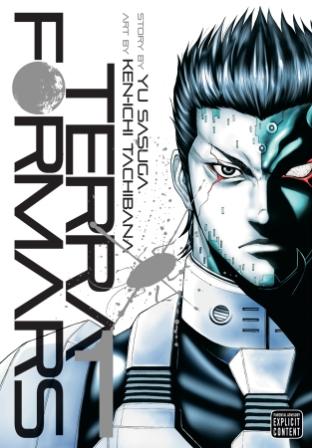 VIZ Media, LLC (VIZ Media), the largest distributor and licensor of manga and anime in North America, administers a spine-tingling dose of sci-fi horror with the launch of the new manga (graphic novel) series – TERRA FORMARS – on July 15th.

The series, illustrated by Kenichi Tachibana with story by Yu Sasuga, will be published under the VIZ Signature imprint, is rated ‘M’ for Mature Readers, and will carry an MSRP of $12.99 U.S. / $14.99 CAN. Future volumes of TERRA FORMARS, which is continuing in Japan, will be released domestically on a bi-monthly basis.

In the late 26th century, overpopulation on Earth has reached the breaking point and humanity must find new frontiers. The terraforming of Mars has taken centuries but is now complete. The colonization of Mars by humanity is an epoch-making event, but an unintended side effect of the terraforming process unleashes a horror no one could ever have imagined…

In the opening volume, after humanity’s first manned mission to the Red Planet was lost, a second expedition arrives. The explorers prepare to exterminate the cockroaches that were used to transform the Martian environment, but are shocked to discover that the insects have mutated into giant, aggressive humanoids with one overriding goal – to exterminate all humans! However, this crew of explorers has each undergone the “Bugs Procedure,” a terrifying experimental surgery designed to make them more than human…

“Kenichi Tachibana’s crisp and kinetic artwork is the perfect vehicle for Yu Sasuga’s sci-fi action drama that will grab TERRA FORMARS readers from the very first chapter,” says Mike Montesa, Editor. “Step off-world into a stark vision of humanity’s future gone shockingly awry in this intense new horror story that presents the dark side to man’s quest to create new worlds among the stars.”

Yu Sasuga made his debut as a manga writer in Miracle Jump with TERRA FORMARS, a project in collaboration with artist Kenichi Tachibana. TERRA FORMARS was nominated in 2013 for a Manga Taisho award. Tachibana’s previous works include Potchari Maniacs and his 2007 series, Lucky Seven Stars.