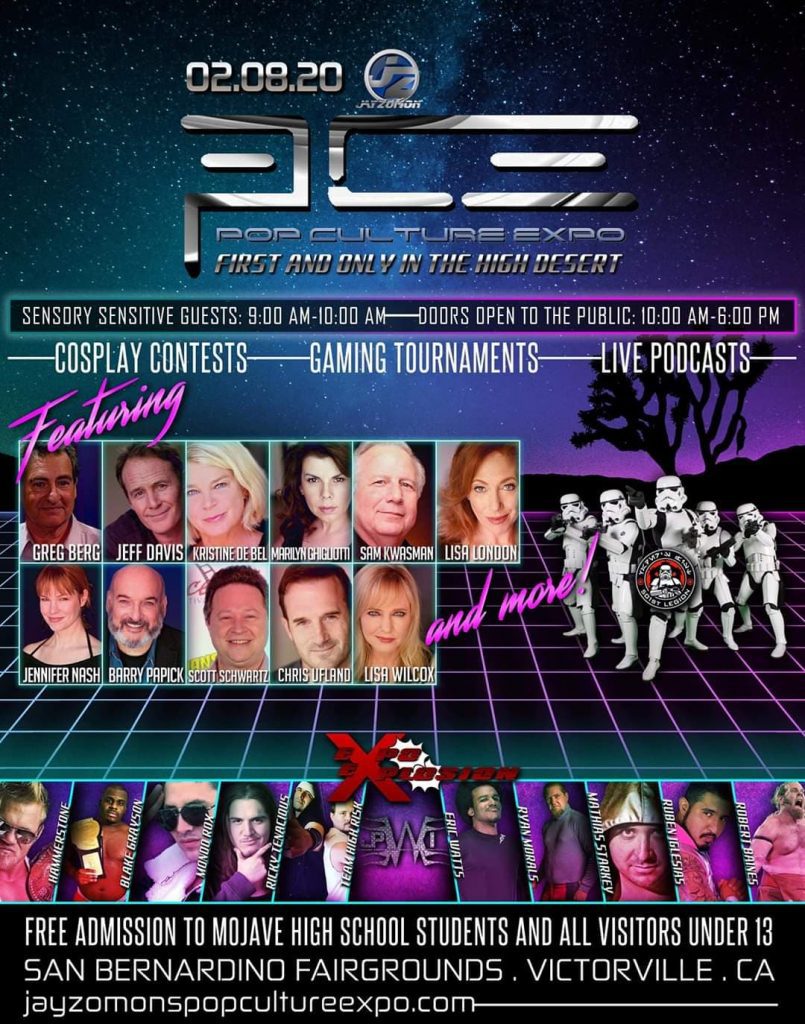 For years, the High Desert has hoped for a comic con to take place right here in our community. On February 8th, it finally happens as JayZoMon’s Pop Culture Expo debuts at the San Bernardino County Fairgrounds. Attendees can expect a plethora of things to enjoy with vendors, celebrities, comic dealers, toy & Collectibles, costumes, clothing, cosplayers and contest, live podcasts, Q&As, Live Wrestling, and much more.

“I think it is high time that we have an event for the nerds of the High Desert,” said David K. Montoya, the founder of the Expo. “We are a loyal group of people who traveled hours to be free in a welcoming environment. Now we won’t have to with PCE.”

Speaking of cosplay, the 501st Legion will be in attendance as well. The nonprofit group has chapters from across the country, and in the Inland Empire has a powerful and talented group of amazing cosplayers. Cosplay is a massive part of any comic book convention, and having a prestigious group like the 501st Legion means we will see some fantastic cosplayers in February.

Sensory Sensitive tickers are also available for anyone with sensory processing disorders like Autism and ADHD. SST holders will be able to enter the Expo one hour early with the ability to experience the event without being overloaded. All proceeds from the SST will be donated to a charity. Montoya spoke about how important this part of the convention is to him, as he is the father of an autistic son, and he will be a part of the SST hour as well.

Pastrami Nation will also be in attendance, as we broadcast live from the High Desert’s first-ever comic convention! We will have prizes, interviews, and more.

For tickets, visit https://www.jayzomonspopcultureexpo.com/ today, or purchase them in-store at Linebreakers on 7th Street in Victorville.

Nolan Smith
0
Tags :
The High Desert Gets its Own Comic Con with JayZoMon's Pop Culture Expo on February 8th