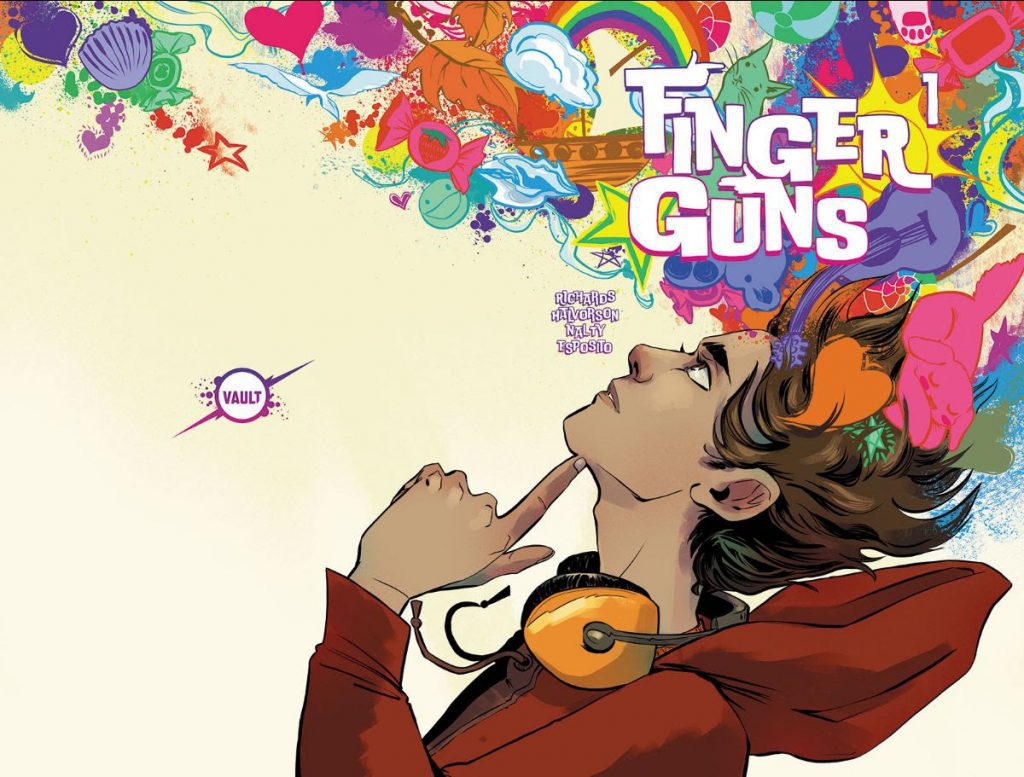 Vault Comics is thrilled to announce that FINGER GUNS #1 is receiving an additional new, wrap around C cover from star artist Jen Hickman (TEST, Jem and the Holograms).

Jen Hickman is a visual storyteller and a graduate of the Savannah College of Art and Design’s Sequential Art program. Past work includes TEST, Moth & Whisper, Jem and the Holograms, the Femme Magnifique anthology, and more. They get really excited about dystopian fiction, good coffee, and drawing hands. Jen can be found on Patreon, Twitter, Tumblr, and Instagram.

Written by Justin Richards, drawn by Val Halvorson, colored by Rebecca Nalty, lettered by Taylor Esposito, and designed by Tim Daniel, FINGER GUNS is one of Vault’s most talked about new 2020 series so far, having already garnered glowing early reviews, along with spotlights in The New York Times and The Hollywood Reporter.

“FINGER GUNS is a deceptively brave story,” says Vault Editor-in-Chief, Adrian Wassel. “It’s about kids, who have the strange ability to point their fingers at people and—bang—manipulate their emotions, but it is not a story for kids. FINGER GUNS handles some heavy themes and tough imagery with such a deft touch you could almost miss it—almost. You’ll see a young white kid running around blasting people with a finger gun that makes them powerfully angry. You’ll see a young girl of color firing a calm gun to stem the chaotic tide. You’ll see these two become friends—support each other, learn from each other, and even hurt each other, in equal measure. FINGER GUNS is a book about emotional maturity, what it takes to grow up, how few of us actually do, and the importance of harnessing compassion in an age of selfishness. Like I said, it’s deceptively brave. You’ll have so much fun, right up until you feel the tears welling.”