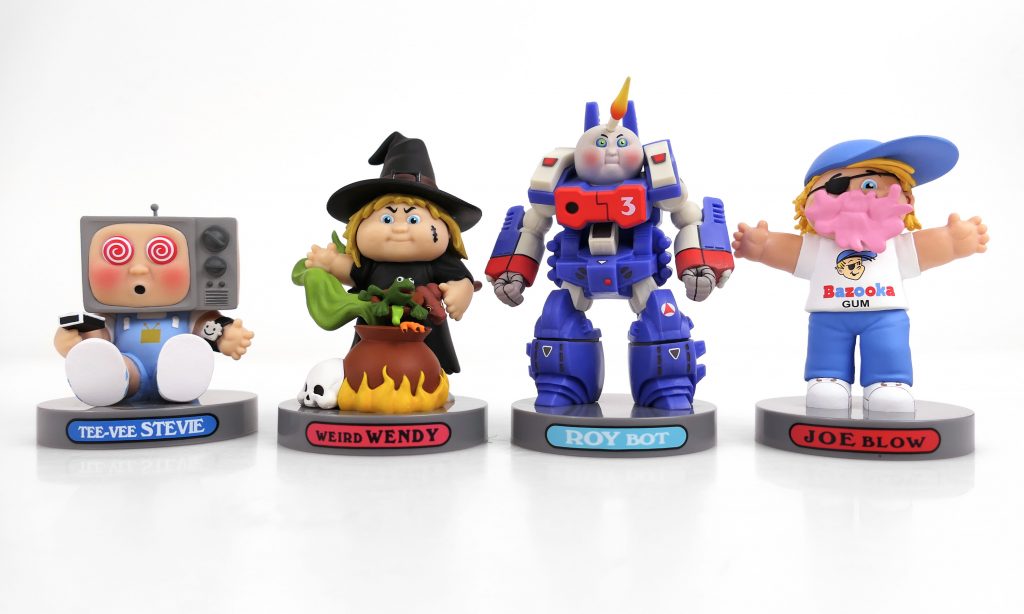 The Loyal Subjects™ (TLS) – a collectibles company known for selling millions of action figures, and collectibles teams up with Topps™, the renowned trading card Company, and creators of the famed GPK™ (the original Garbage Pail Kids property), taking a full-on gross-out swing at Topps’ beloved gross-out cast of misfits which emerged across playgrounds, Trapper Keepers, and school books throughout the world during the mid 80’s, reviving the nostalgia mojo with a beautifully imagined wave of figurines, and pull-back racers aptly named Garbage Pail Krashers™!

The figural sets stand 4.5” tall, and resemble a 3D representation of the trading cards; complete with a figure, a background, a stand, and name plate mirroring the classic Topps’ GPK name plates flanking the lower third of the trading cards/stickers.  Beautiful sculpt details, clean-crisp paint details, and spot on sculptural likenesses of everyone’s favorite GPK cast of misfits, and gross-out goons bring these characters to vivid life and onto every GPK fan’s shelves!  The figures are packaged in a collector box with a dioramic insert, and an exclusive TRADING CARD which can only be found with the TLS x GPK figures!  A must have for any GPK enthusiasts.  The first wave includes classics like Joe Blow, Weird Wendy, Roy Bot, and TeeVee Stevie!  Delightful details pour from Weird Wendy’s caldron like a plume of magical mist, fire burning logs, and of course a magic frog (either a companion or a component to her brew’s recipe)!  And as a follow up after the first wave flies off the pegs at Walmart (IN STORE NOW!), the ever-so-popular variant characters will be right behind, including Rod Wad, Haggy Maggie, Hot Head Harvey, and Geeky Gary, each coming with an exclusive TRADING CARD which can only be found with the TLS x GPK items.  More waves are in the works, including a Stranger Things x GPK mashup hitting Walmart stores across the US this coming May!  Keep those eyes peeled.  Fairly limited in quantities, don’t miss out!  ONLY $16.96 at participating Walmart Stores and Walmart.com!