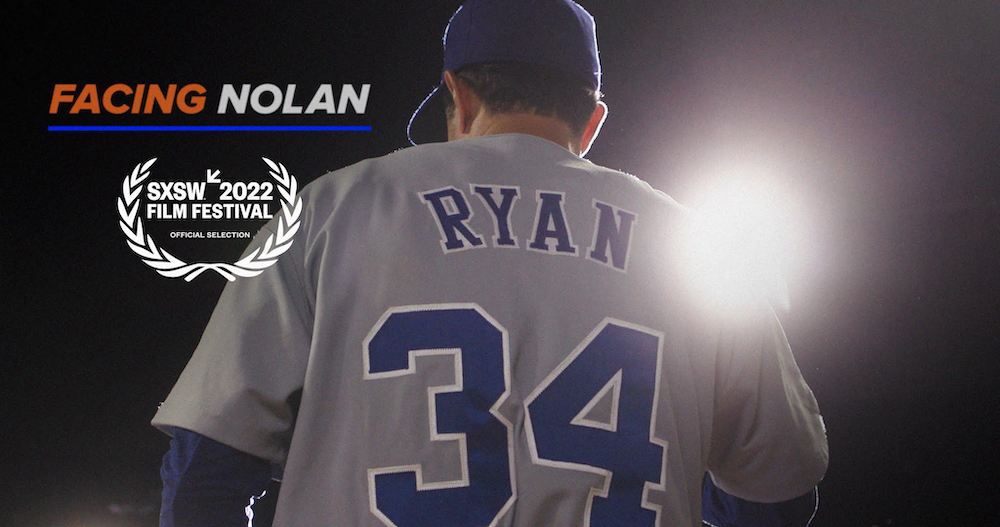 The Texas Rangers to Premiere Nolan Ryan Documentary on May 1

In the world of Major League Baseball, no one has created a mythology quite like Nolan Ryan. “Facing Nolan”, a new documentary covering Nolan’s life and illustrious career, will premiere in Texas-like fashion and surely grow his legendary status. When the Texas Rangers conclude their 1:35 p.m. game against the defending World Series Champion Atlanta Braves on Sunday, May 1, fans will be treated to a special post-game ceremony and Q&A, following by the World Stadium Premiere of the movie in its entirety on the Globe Life Field video boards. May 1 is also the 31st anniversary of Ryan’s seventh and final no-hitter against the Toronto Blue Jays at Arlington Stadium which he pitched at the age of 44.

“Nolan Ryan is enshrined in Cooperstown as a Texas Ranger,” said John Blake, Executive VP-Public Affairs for the Texas Rangers. “It is only fitting that our fans should have the first opportunity to see his documentary at Globe Life Field.”

“As one of the greatest power pitchers in the history of baseball, Nolan Ryan demonstrated an unparalleled blend of hard work, toughness and endurance,” said Commissioner of Baseball Robert D. Manfred, Jr. “Facing Nolan will give those who saw this Hall of Famer set records on the mound a reminder of his greatness while also giving the next generation of fans a closer look at his legendary career. Globe Life Field is a perfect setting to show the movie since some of Ryan’s most memorable moments came while wearing a Rangers uniform.”

Nolan Ryan played for the New York Mets, California Angels, Houston Astros and Texas Rangers. His most notable accomplishments on the field include 5,714 strike-outs, seven no-hitters and the fastest pitch at 108.1mph. In spite of setting 51 MLB records, Nolan never won a Cy Young Award and was constantly undervalued as a player according to teammates, coaches and journalists.

Facing Nolan is directed by Bradley Jackson, produced by Russell Wayne Groves, and is co-represented by XYZ Films and Utopia. “Facing Nolan is a movie that transcends beyond baseball fandom and one that everyone will enjoy,” said Cole Harper, Partner with Utopia. “It’s a four-quadrant film that families, couples and people of all ages absolutely must see. This isn’t just a sports documentary – it’s a romantic comedy – a love letter wrapped in baseball. And while Nolan may be the star, it’s truly Ruth Ryan at the center of it.”

Individual tickets for the Sunday, May 1 game and all 2022 Texas Rangers home games except opening day, April 11 will go on sale this Friday, March 18 at 10:00 a.m. at texasrangers.com or by calling 972RANGERS.

Nolan Smith
0
Tags :
The Texas Rangers to Premiere Nolan Ryan Documentary on May 1