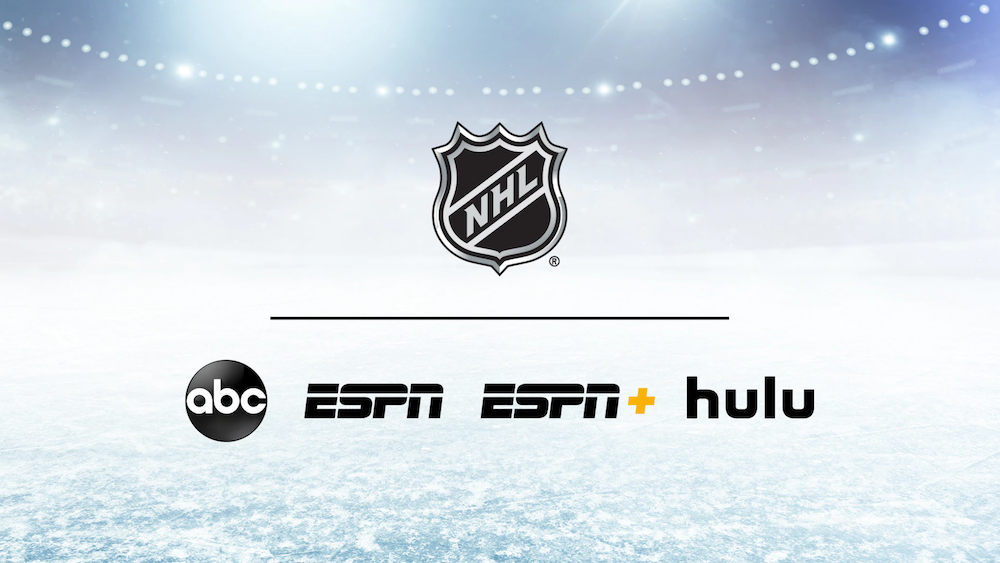 The Walt Disney Company, ESPN and the National Hockey League have reached a historic and innovative seven-year television, streaming and media rights deal, taking the new partnership from the beginning of the 2021-22 season through the 2027-28 season.

The visionary, first-of-its-kind agreement brings the NHL back to Disney and ESPN platforms and illustrates the unique position of The Walt Disney Company to bring the best hockey in the world to millions across its unparalleled collection of media platforms.

It is highlighted by: exclusive coverage of the Stanley Cup Final on ABC in four of the seven years of the agreement, with the ability to simulcast/megacast on ESPN+ and additional ESPN networks; the return of live NHL action to ESPN networks with 25 exclusive national regular-season games on ABC or ESPN; 75 national regular-season games per season produced by ESPN that will stream exclusively on both ESPN+ and Hulu; half of the Stanley Cup Playoffs on ABC and ESPN each season; and coverage annually of NHL’s Face-off (opening night games), the NHL All-Star Game and Skills Challenge, plus other NHL special events each season.

Additionally, the NHL’s out-of-market streaming package, with more than 1,000 games (formerly on NHL.TV), will now be available for fans to stream only as part of an ESPN+ subscription.

The agreement also includes extensive highlight rights that will add to coverage across ESPN’s year-round news and highlights programming, and to coverage on the ESPN App and social media. International media rights – including in Latin America, the Caribbean and parts of Europe – are also part of the agreement.

“This partnership of the world’s top hockey league and the platforms of The Walt Disney Company is a big win for our fans and our game,” NHL Commissioner Gary Bettman said. “Not only will this groundbreaking, seven-year deal enable the NHL to benefit from the incomparable power, reach and influence of The Walt Disney Company and ABC/ESPN, it sets a new standard in delivering our game to the most passionate and tech-savvy fans in sports in the ways they now demand and on the platforms they use.”

Jimmy Pitaro, Chairman of ESPN and Sports Content said, “This agreement clearly underscores The Walt Disney Company’s leadership in the sports media landscape and serves as a blueprint for sports deals in the future. We know the power of the NHL and are thrilled to welcome it back as a significant new pillar across our platforms, and we look forward to connecting more deeply and directly with some of the sports world’s most passionate fans.”

Kareem Daniel, Chairman, Disney Media & Entertainment Distribution said, “This is the kind of innovative deal that only The Walt Disney Company and our portfolio of media platforms and businesses can bring to life. The combination of streaming leadership with ESPN+ and Hulu, along with our powerhouse ABC and ESPN networks, will bring the NHL into the homes and lives of millions of passionate fans – and help create new ones. It’s a hat trick that delivers incredible value to our partner, our business and consumers.”

Under the new agreement, the NHL’s Stanley Cup Final and Stanley Cup Playoffs action will return to the ABC and ESPN networks – including exclusive coverage of the Stanley Cup Final in four of the seven years of the deal – beginning with the 2021-22 season.

Additionally, in each season of the agreement, ESPN and ABC will have live, exclusive coverage of one Conference Final series and half of all First Round and Second Round games from the Stanley Cup Playoffs.

Throughout the regular season, 25 games from the NHL schedule will be carried live, exclusively on ABC or ESPN.

Live game coverage, plus studio, surround and original programming plans across all of The Walt Disney Company’s networks and streaming platforms will be announced in the coming months, including a new weekly studio show during the NHL season on ABC, ESPN or ESPN2.

NHL Streaming on ESPN+ and Hulu

Beginning with the start of the 2021-22 season in October, ESPN+ will stream more than 1,000 live NHL games per season, including 75 national games per season produced by ESPN and streamed exclusively on both ESPN+ and Hulu, a first. Additionally, ESPN+ subscribers get truly incredible value with more than 1,000 out-of-market games now available digitally only on the industry-leading sports streaming service – making it a must-have for hockey fans. ESPN+, which topped 12.1 million subscribers by the end of 2020, nearly doubling in a year, also features “In the Crease” an exclusive original highlights show, hosted by ESPN’s Linda Cohn and Barry Melrose each NHL gameday throughout the season.

The new agreement also showcases that Hulu is a truly distinctive streaming product and marks the first major sports agreement to include exclusive, live sports rights on Hulu – bringing the NHL to Hulu’s 39.4 million subscription video on-demand (SVOD) customers. The 75 games available to ESPN+ subscribers will be available to Hulu SVOD subscribers at no added cost as part of their subscription.

The agreement also comes as Disney is launching “ESPN+ on Hulu,” which will give Hulu subscribers with access to the service’s on-demand streaming library the choice to sign up for, and view, ESPN+ – including thousands of live events, and acclaimed original shows, series and documentaries – directly in the Hulu environment.

The combination highlights the value and growth of both services and The Disney Bundle (which offers consumers Disney+, ESPN+ and Hulu, all for $13.99 or $19.99 per month*).

The NHL first appeared on ESPN on Dec. 19, 1979, only about three months after the network went on air. ESPN’s coverage recorded milestones both on and off the ice the in the first nine seasons, including being the first U.S. network to produce an NHL All-Star Game in 1986. After a four-year absence, the league returned to the network in 1992 and aired for the first time on ESPN2 the following season, just days after the channel’s debut. In the years that followed, the NHL played a key role in the expansion of ESPN2, leading to ESPN and ESPN2 celebrating their 1,000th NHL telecast on March 8, 1998. Over the years, ESPN introduced its innovative production elements to hockey coverage, including electronic cut-ins (1980), MaskCam (1998), SkyCam (1998) and more. The network’s most recent TV rights deal with the league concluded in 2005.

Live daily out-of-market game coverage and the “In the Crease” daily studio show have been carried on ESPN+ since 2018. Additionally, Disney (and BAMTech, prior to its acquisition by Disney) has been a technology and streaming partner for the NHL since 2015.