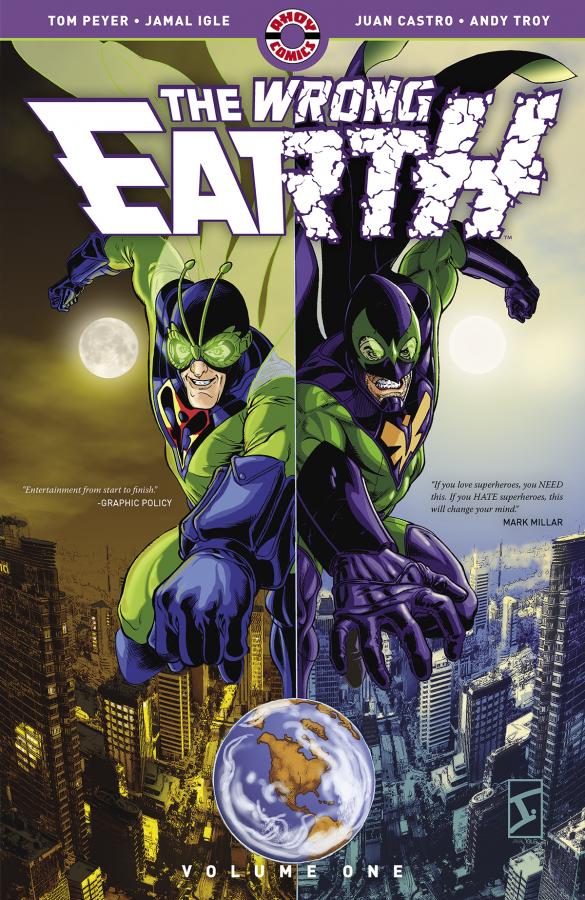 I am not familiar with Ahoy Comics, but when I saw just the cover to The Wrong Earth at my comic shop, it made me want to learn more. It’s a dimension-spanning story of super heroics, two sides of the same coin, but one side has some serious anger issues. From writer Tom Peyer and art by Jamal Igle, inker Juan Castro, and colorist Andy Troy, the book focuses on Earth Alpha’s hero Dragonflyman and his polar opposite on Earth-Omega, Dragonfly, and what happens when they trade places.

Earth Alpha is like the super heroics seen in the Adam West Batman era: elaborate deathtraps, cheesy villains, and a cheesier hero and sidekick that seem too wholesome for words. But Dragonfly on Earth Alpha is more gritty, real-world bases and scarred from loss. So when the villain Number 1 uses a magic mirror to jump Earths, the two bug inspired heroes end up trapped on their opposite worlds, which leads to some entertaining moments.

Not only do we see the differences between the heroes, but by the end of the collection, we see some eerie similarities, ones that make you wonder just how heroic is each hero? Peter creates such an entertaining story here, taking archetypes of the heroes we know and love and putting them in “what if” types of situations that fans have thought of for years. What would Batman be like if he never lost Robin to the Joker? He would probably be a lot like Dragonflyman. Not to say these heroes are clones, not at all. I enjoyed the adventures of both heroes and their respective sidekicks, as well as a glimpse into their rogues gallery and how it varies from the different Earths.

The art here is fantastic and full of energy. It feels like a tremendous entry into the world of superheroes for Ahoy, and an entry into the comic book market as well. I enjoyed this collection, and I hope we get to revisit these Earths more soon, especially after the revealing ending! Ahoy Comics has a fan in me, now let’s get to more of Dragonfly/Dragonflyman!