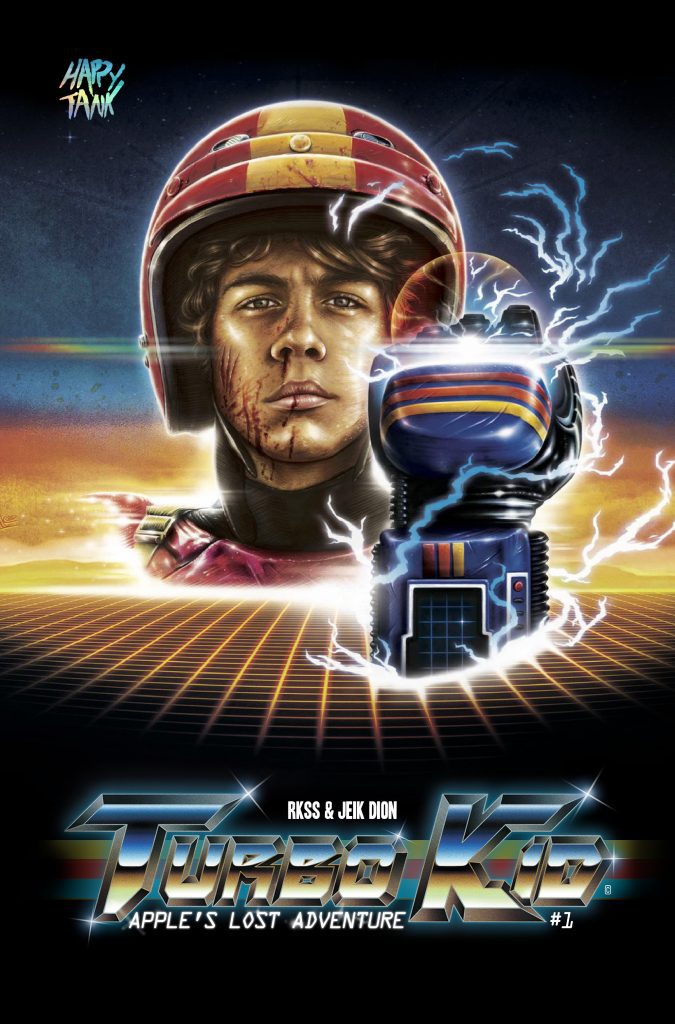 Cult movie sensation Turbo Kid (2015) is turning into a multi-media franchise with a sequel film in development presented as the ‘’road warrior of the franchise’’, a video game in development by Outerminds (out in 2022), and now with a comic book series written by the directors & drawn by the storyboard artist of the movie releasing at Happy Tank (imprint of Behemoth Comics) in September.

In this prequel mini-series, follow Apple, one of the fan favorite characters of Turbo Kid, in an action packed prequel! Are you ready to go deeper into the universe of this already cult movie? Face the Robots War and the path that led Apple on the Kid’s route!

Turbo Kid film storyboard artist and artist on this Comic Book Prequel, Jeik Dion has this to say about teaming up with the original Turbo Kid creative team in RKSS:

“Working with RKSS on the Turbo Kid franchise brought me back when I was 8 years old, waking up before my parents, on a Saturday morning, getting ready to watch cartoons for hours. It’s exactly like that, but with way more blood.”

“I always looked up to Turbo Kid as an inspiration. It’s the greatest indie film ever made here (in Quebec, Canada). Without being patriotic, it’s exciting and special to have the chance to contribute to this franchise. If you’re a music label from Toronto and Drake asks you to sign his album you say ‘HELL YES!’ and be proud. That’s exactly how I feel right now. RKSS and Jeik Dion are talented beasts.”

Fans can expect non-stop action in this Turbo Kid comic book which expands on the Original Film’s lore. It’s an absolute must have companion to the first film and the upcoming game (out in 2022). Turbo Kid: Apple’s Lost Adventure #1 will be available from your Local Comic Shop in September 2021.