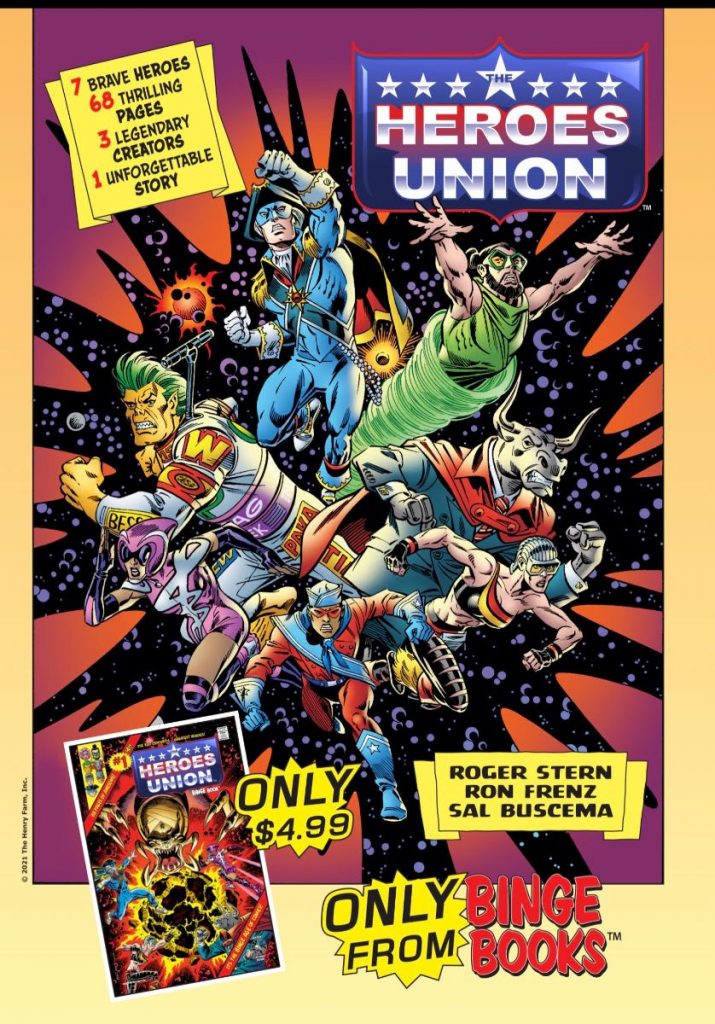 Acclaimed writer Roger Stern (The Avengers, Captain America) joins celebrated artists Ron Frenz (Thor, The Amazing Spider-Man) and Sal Buscema (Captain America, The Defenders) to chronicle the explosive journey of a marvelous new generation of superheroes in The Heroes Union #1. Arriving August 4, 2021, this is the first of several planned releases to be made available as a modernized, Binge Book edition. Created by veteran TV writer Darin Henry (“Seinfeld,” “Futurama,” “KC Undercover”), Binge Books are tailored for today’s audiences used to “bingeing” their favorite content. At 68 pages, The Heroes Union #1 will be longer than the average comic, allowing for the complete, family-friendly adventure to be released all at once as a standalone story for $4.99.

In addition to their length, Binge Books have a number of other attributes that make them unique in the comic space. The Heroes Union #1 reunites Stern and Frenz, the creative team behind the iconic Spider-Man story, “The Kid Who Collects Spider-Man,” (The Amazing Spider-Man #248). By special arrangement with the Comic Book Legal Defense Fund, The Heroes Union #1 will be the first comic in over a decade to feature the official Comics Code Authority Seal and each copy will also be uniquely numbered forcollectors. The publisher has hinted that some of these numbered variants may eventually entitle their owners to additional perks, but further details have not yet been revealed.

With an action-packed, engrossing story featuring compelling new superheroes with names such as ‘Startup,’ ‘Windfall,’ ‘Protégé’ and more, The Heroes Union #1 will also offer adults a unique way to teach children about business.

“Like millions of other kids, I grew up devouring comics by Roger Stern, Ron Frenz and Sal Buscema, so to have some of the 20th Century’s greatest creators introducing readers to the 21st Century’s greatest heroes is a personal and professional dream come true,” said Binge Books creator, Darin Henry.  “I was inspired to create Binge Books by European comic albums like TinTin and Asterix because I wanted to publish affordable graphic novellas for US readers to enjoy.”  The Heroes Union #1, and other soon-to-be-announced Binge Books releases, will all be distributed by Diamond Comics. To learn more, please visit www.BingeBooks.fun.

The Heroes Union #1
Written by Roger Stern, Art by Ron Frenz (p), Sal Buscema (i), Chris Nye (i), Cover by Ron Frenz (p) & Brett Breeding (i)
Distributed by Diamond Comics | Order Code: JUN211347
On Sale 8/4/2021
68 Pages | All Ages | $4.99
Naucrate the Auteur Cosmic — half the universe celebrates her genius, the other half cowers before her world-shattering power. And the only ones who can stop her are Earth’s foremost super-group… The Heroes Union! Legendary creators Roger Stern (The Avengers), Ron Frenz (Thor) and Sal Buscema (Captain America) unite to chronicle the adventures of a marvelous new generation of heroes in a cosmic epic bursting with so many breathtaking twists and thrills, it should probably come with seat belts!  This 68-page, standalone story introduces all-new 21st Century Heroes in an exciting new, square-bound “Binge Book” format!