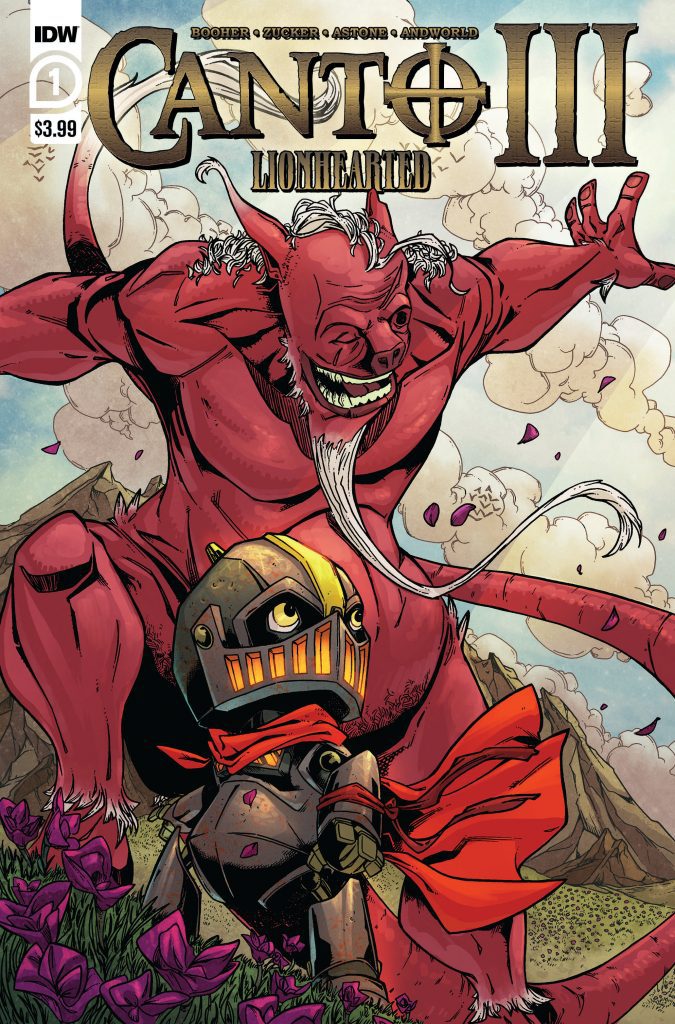 What’s silver and ticking and brings hope to the world? Canto III: Lionhearted is Coming Soon!

Following the Westbrook Studios film adaptation announcement in 2021, David M. Booher and Drew Zucker’s beloved hero returns once more to capture the hearts of readers! IDW is proud to announce Canto III: Lionhearted, an all-new 6-issue installment of the original fan-favorite comic series hot on the heels of Canto & the City of Giants.

The tiny clockwork knight in search of a heart has found his people’s freedom and has saved them from the curse of the Shrouded Man, but is he ready to face his enemy on the battlefield? After making the ultimate sacrifice, Canto bears a weapon that could defeat the Shrouded Man and free all the inhabitants of the Unnamed World. Now, he races to find a hidden settlement of his former slavers to enlist them as allies in the coming war. That is… if the Shrouded Man doesn’t find them first…

“One of the best comics to hit shelves in recent memory.”
– Samantha Puc, CBR

“It’s not good, it’s fantastic. As we continue to follow the story of our little tin hero in the second issue, Booher and Zucker continue to exceed expectations. Canto is quickly becoming not only one of the most powerful fantasy comics but a must-own series of any genre.” – Thomas Sauceda, AiPT!

“It continues to be the best all-ages comic out there. Scratch that “just one of the best comic books out there, period, that just happens to be all-ages. The series continues to stay true to its original tagline “Part Fantasy. Part Adventure. All Heart.” Don’t miss out!” – Brent Jackson, Word of the Nerd

“This is a comic which goes beyond simple stories and is steadily creating a modern heroic myth.” – M.R. Jafri, Comic Crusaders

“Lionhearted may be my favorite Canto story yet,” says writer David M. Booher. “We explore what it means to have courage in the face of fear. Drew and Vittorio have done career-defining work on art and colors for this new story. Canto fans and new readers alike are going to love where we take our little clockwork hero next.”

“As we’ve progressed the story, we’re now finding ways to use the world we have built,” says artist Drew Zucker. “This has been one of the most exciting times I’ve had working on Canto yet!  We’re using all the old elements and blending them with the new ones to help tell a story that gets to the heart of what Canto is all about. I can’t wait to share the twists and turns this particular adventure takes with everyone.”

Canto III: Lionhearted #1 is slated for release from IDW Publishing on July 14th, and is now available for preorder! Colors by Vittorio Astone, letters by AndWorld Design. Variant covers by Conor Nolan and Jorge Corona.