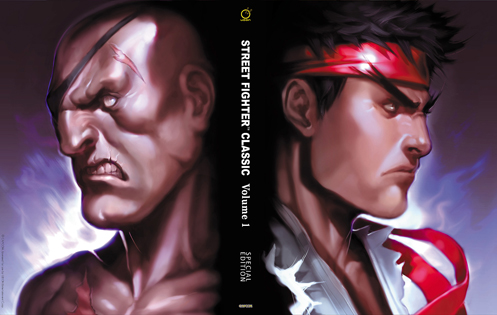 JUNE 25, 2013 —This summer marks the 10th Anniversary of UDON Entertainment’s original comics and graphic novels based on the world-famous Street Fighter® video game series, and we’re celebrating in a big way at San Diego Comic-Con International 2013! The UDON Booth #4529 will feature creative icons of the Street Fighter universe signing and sketching for fans, and three Comic-Con exclusive projects! No Street Fighter fan will want to miss it!

Yoshinori Ono is the legendary Capcom producer who produced for the popular “Street Fighter IV,” and is credited on over 23 game titles. Most recently, he headed up production of “Street Fighter® x Tekken®” as the Street Fighter series executive producer. UDON is honored to present a rare opportunity for fans to meet Yoshinori Ono at Comic-Con, signing at The UDON Booth #4529, Thursday July 18th, 5:00pm-6:30pm. Thanks to Capcom for helping us arrange this event!

A valued member of the UDON crew, superstar artist Joe Ng has beautifully illustrated some of the most beautiful licenses in the comics industry! Whether lending his pencil to The Transformers, GI Joe, or UDON’s Street Fighter graphic novels, Joe has brought a high level of draftsmanship and skill to all of his comics outings. Now, Joe Ng has produced the best work of his career on the sensational Street Fighter™ Origins: Akuma, making its international debut at Comic-Con! Joe Ng will be signing and sketching for fans every day of Comic-Con at The UDON Booth #4529!

DEBUTING AT COMIC-CON! Street Fighter Origins: Akuma, the long-awaited origin story of the most terrifying fighter in the world! Featuring story by Chris Sarracini and art by Joe Ng, this original graphic novel mixes a surprising and intense coming-of-age story with the all-out action that Street Fighter fans love! At Comic-Con, fans will be able to get the exclusive “VS.” Convention edition, featuring an awesome Akuma vs. Gouken dust jacket painting by James Ghio, with a bonus “Sakura on the beach” image on the reverse! $40

MEET THE UDON CREW AT COMIC-CON, BOOTH #4529!
UDON will welcome a bunch of members of its studio at Comic-Con 2013, as they will sign and even sketch for fans every day of the event! Please join us in welcoming Arnold Tsang (Blizzard Entertainment, UDON founding member), Long Vo (Street Fighter II HD Remix, Go Ninja!), Edwin Huang (Super Street Fighter, Skullkickers), and Dax Gordine (Bravoman).

THE UDON PANEL 2013: WHAT’S IN STORE FOR STREET FIGHTER AND MORE!
No Street Fighter fan will want to miss the UDON panel on Friday, July 19th, from 5:30pm-6:30pm, Room 26AB! Get an exclusive sneak peak at UDON’s Street Fighter plans for 2013 and 2014! New project announcements, creative-team reveals, preview artwork!

So remember, The UDON Booth #4529 is the place to be to meet the minds behind the Street Fighter universe, and many of the amazing artists who bring it to life! See you at San Diego Comic-Con International, July 17th to 21st!