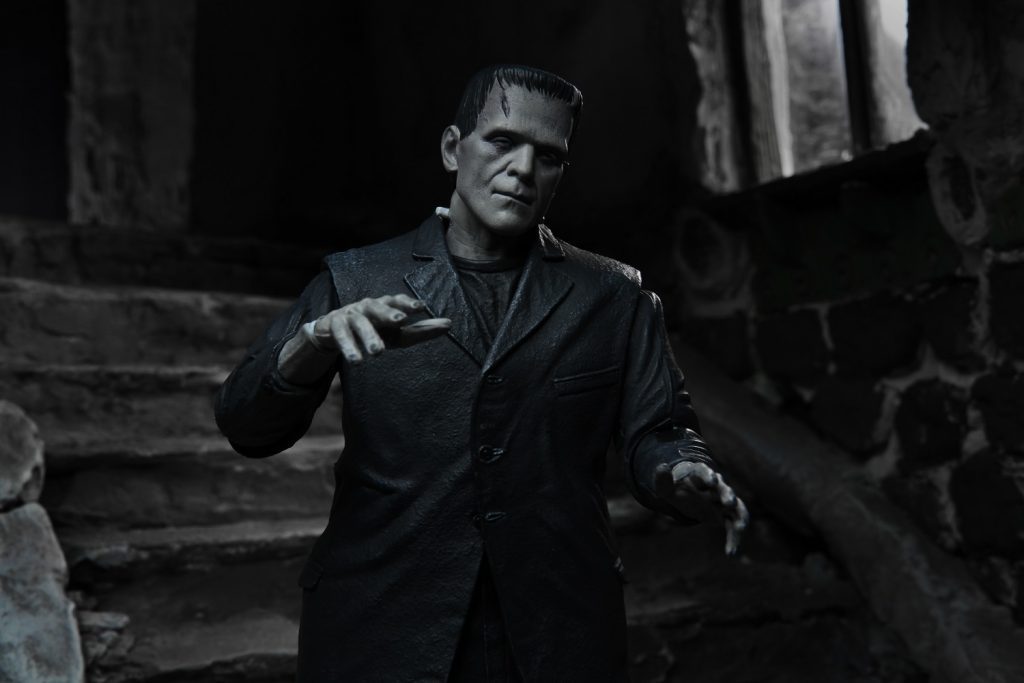 The first figure (arriving in July) will be Frankenstein’s Monster from Frankenstein (1931), which celebrates its 90th anniversary this year. The sculpt captures Boris Karloff’s poignant portrayal of the misunderstood monster in authentic black-and-white. A color version of the figure will follow.

Subsequent figures set for 2021 will include Lon Chaney Jr. as the Wolf Man from The Wolf Man (1941), Boris Karloff as the titular figure in The Mummy (1932), and Bela Lugosi as the legendary Count in Dracula (1931).

“We are proud to be working with NECA to include Bela Lugosi as Dracula as an Ultimate figure,” said Lynne Lugosi Sparks, CEO of LUGOSI LLC. “NECA’s attention to detail is amazing and we are happy to celebrate the 90th anniversary of Bela Lugosi’s iconic screen performance as Dracula with this figure.”

NECA’s Ultimate format is a favorite among collectors for its complete portrayal of a character with a wide array of alternate heads, hands, and accessories so that many iconic moments from the movie can be recreated. The 5th-panel packaging also allows collectors to remove and replace without damaging the packaging.

“As a lifelong fan of Universal Monsters, this is a dream come true,” said Randy Falk, NECA VP & senior director of product development. “I’ve been collecting Universal Monsters toys since I was a kid. This line aims to create something hyper-realistic and ultra-detailed for people like me who grew up watching these amazing movies and have always longed for definitive versions.”

NECA (National Entertainment Collectibles Association) is a leading creator, marketer, and global distributor of licensed consumer products based on some of the world’s most recognizable movies, video games, comic books, and pop culture. The NECA group of companies includes game developer and publisher WizKids, urban vinyl icon Kidrobot, and Joseph Enterprises, Inc., the creator of Chia Pet, The Clapper and other iconic American products.