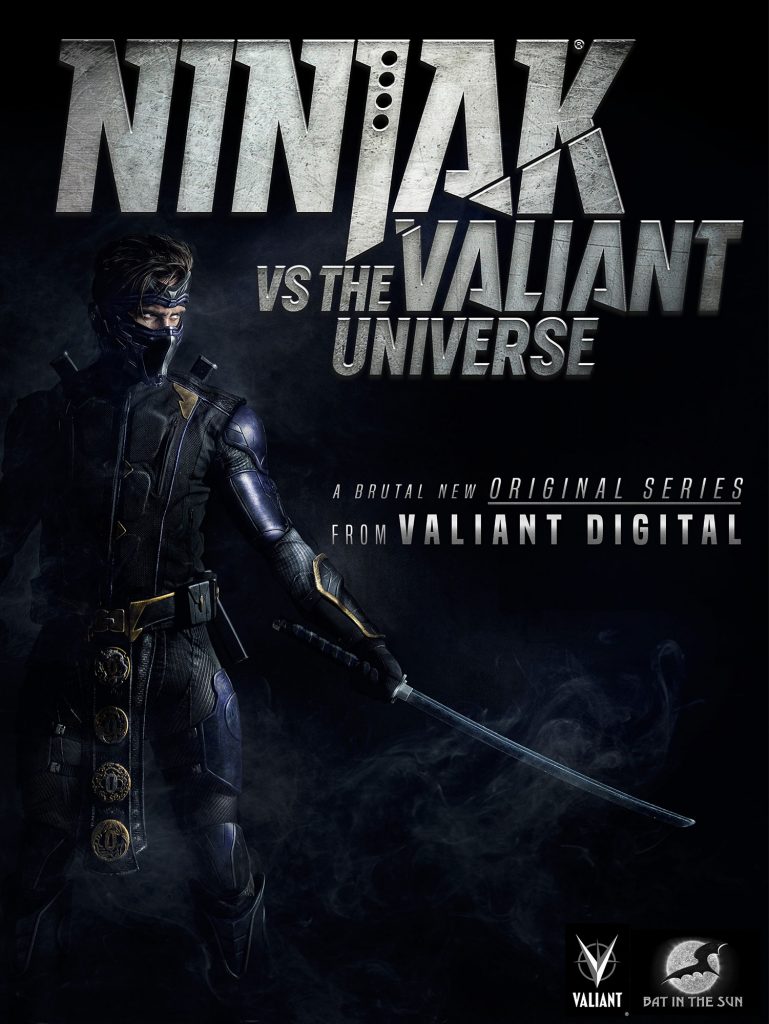 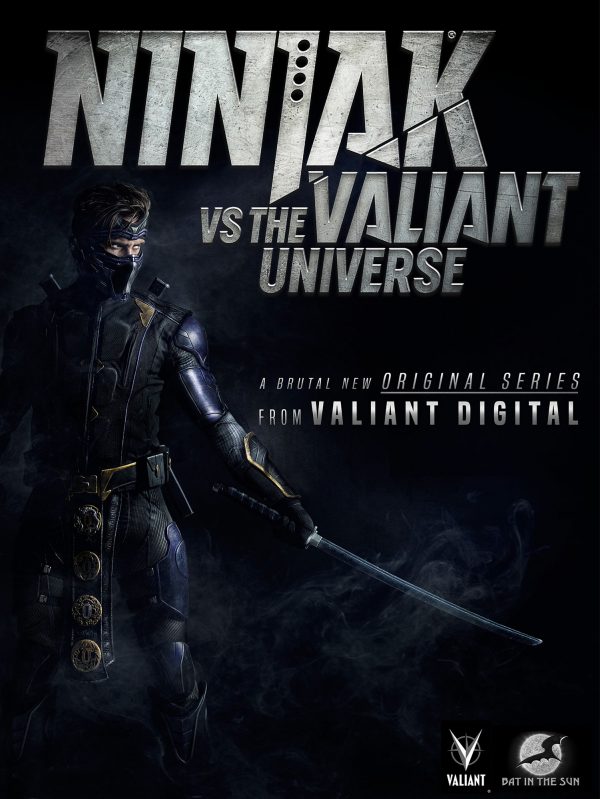 At the New York Comic Con 2015, Valiant Entertainment revealed something fans of Valiant’s stable of character went crazy over: Ninjak Vs. The Valiant Universe.The six episode series will feature the master assassin NInjak as he takes on some of Valiant’s best and bloodthirsty characters, including Bloodshot, the Eternal Warrior, Armstrong, Livewire, X-O Manowar, and more.

The project, marking the first from Valiant Digital, which is a new division of Valiant dedicated to creating original content in live action animation and more for the digital arena.

“With major projects in film, television, and gaming already well underway, VALIANT DIGITAL is the next strategic evolution of Valiant’s long-term plan to expand the ranks of its already sizable fanbase around the world,” said Valiant Chief Operating Officer Gavin Cuneo. “In years past, it wasn’t uncommon for comic book publishers to prime new fans by expanding into Saturday morning animation or short-form programming. Today, that demographic has largely migrated online. With the launch of VALIANT DIGITAL and, soon, NINJAK VS. THE VALIANT UNIVERSE, Valiant will become the first major comic book publisher to create original, short-form content for the digital arena – and, with it, introduce our characters to one of the most engaged and passionate communities anywhere.”

Check out the trailer below:

For those who aren’t familiar with Ninjak or Valiant- why haven’t you read a Valiant book yet? I have been a huge fan of Valiant since it’s rebirth a few years back, and they keep getting stronger and stronger. With this ambitious live action series, Valiant has tapped Aaron & Sean Schoenke of Bat in the Sun Productions – the creators of the massively popular YouTube sensation Super Power Beat Down as directors. Written by Aaron Schoenke, Sean Schoenke, and Joe Harris, Ninjak Vs. The Valiant Universe stars Michael Rowe (Deadshot from The CW’s Arrow and The Flash) as Colin King aka Ninjak; Jason David Frank (Power Rangers!!!) as Bloodshot; John Morrison (WWE, El Rey’s Lucha Underground) as the Eternal Warrior; Chantelle Barry (90210, Entourage) as Roku; Kevin Porter (Dodgeball) as Armstrong; Ciera Foster (Two and a Half Men) as Livewire, and Derek Theler (ABC’s Baby Daddy) as X-O Manowar; among others yet to be revealed. The series will be produced by Dinesh Shamdasani, Josh Johns, and Gavin Cuneo for Valiant Entertainment.

“We’ve been quietly working over the last year to build a series of a scale and ambition that has never before been attempted in the digital space. NINJAK VS. THE VALIANT UNIVERSE is a showcase for the incredible characters and storytelling that Valiant has exhibited from its inception,” said Valiant CEO & Chief Creative Officer Dinesh Shamdasani. “We are incredibly excited to finally be sharing the first project from VALIANT DIGITAL with the Valiant fanbase, the comic book faithful and a whole new legion of fans who consume pop culture in the digital arena, but have yet to purchase their first Valiant comic. We’re bringing the same passion and intensity that helped us produce some of the best comics in the business and coupling that with an incredible, first-class team of filmmakers to create an experience that must be seen to be believed.”

For those thinking, “Well, that’s great… who the heck is Ninjak???” Here you go: Colin King is Ninjak, MI-6’s deadliest intelligence operative and weapons expert. When the ruthless assassin Roku exploits his greatest weakness, Ninjak will be forced to betray his closest allies. Now, on the run, he must face off against the most powerful heroes known to man for a high-octane, take-no-prisoners trial by fire more perilous and more unpredictable than any he’s faced before. In 2017, the world’s most dangerous super-spy goes to war with the Valiant Universe.

“Bat in the Sun couldn’t be more excited to be teaming up with the Valiant Digital family with NINJAK VS. THE VALIANT UNIVERSE,” said Bat in the Sun Productions co-founder Aaron Schoenke. “Since starting Bat in the Sun in 2001, we have continued to push boundaries of digital-exclusive content and we excitedly look forward to bringing our millions of fans a series unlike anything they have seen before.”

Originally founded in 1989, Valiant Entertainment is one of the most successful publishers in the history of the comic book medium with more than 80 million units sold and the third largest library of superhero characters in comics. In 2012, Valiant roared back to the fore with four new titles released under the banner of “The Summer of Valiant” – a relaunch that quickly established itself as the biggest debut of a new comic book publisher in more than a decade. Beginning with X-O MANOWAR #1 by New York Times best-selling writer Robert Venditti and Eisner Award-winning artist Cary Nord, which ranked as the year’s best-selling new series from any independent publisher, Valiant has gone onto produce some of the highest selling and most critically accoladed comic titles anywhere in the industry. During the same period, the resurgent Valiant was also awarded a coveted Diamond Gem Award for Publisher of the Year after just seven months of publishing, marking the fastest time that any new publisher had been named to one of comics’ highest honors. In 2015, Valiant announced a multi-picture deal to bring Bloodshot and Harbinger to the big screen as feature films.

Consistently rated year over year as the most acclaimed comic book publisher in the industry today, Valiant has received hundreds of awards, nominations, and critical accolades, culminating in 2016 with a record-setting 50 Harvey Awards nominations – the most ever received by a single publisher in the history of one of the comic book industry’s most prestigious awards.

Co-created by legendary writer/artist Bob Layton, writer Mark Moretti, and current Marvel Chief Creative Officer Joe Quesada, Ninjak first debuted in 1993 in the pages of Valiant’s BLOODSHOT #6 before launching his own massively popular solo series. As one of the definitive and most popular Valiant heroes of all time, Ninjak boasts lifetime sales of more than 3 million copies and a legion of fans around the world. Ninjak’s current series, launched in 2015 by New York Times best-selling writer Matt Kindt with artists Clay Mann and Butch Guice, is often cited as one of Valiant’s finest and was recently nominated for seven 2016 Harvey Awards in categories including Best Continuing or Limited Series, Best Graphic Album, Best Cover Artist, and many more. NINJAK VS. THE VALIANT UNIVERSE will mark the character’s first appearance in live-action.

Founded by Aaron & Sean Schoenke in 2001, Bat in the Sun Productions is one of the leading producers of scripted original content in the digital arena. Their flagship show, Super Power Beat Down, is one of the most successful original series in YouTube history and features popular heroes and villains leaping from the comic page and onto the screen for a winner-take-all battle decided by fans across the globe. The success of Super Power Beat Down has launched Bat in the Sun’s YouTube network into worldwide notoriety and popular acclaim with nearly 2 million subscribers and more than 200 million views.