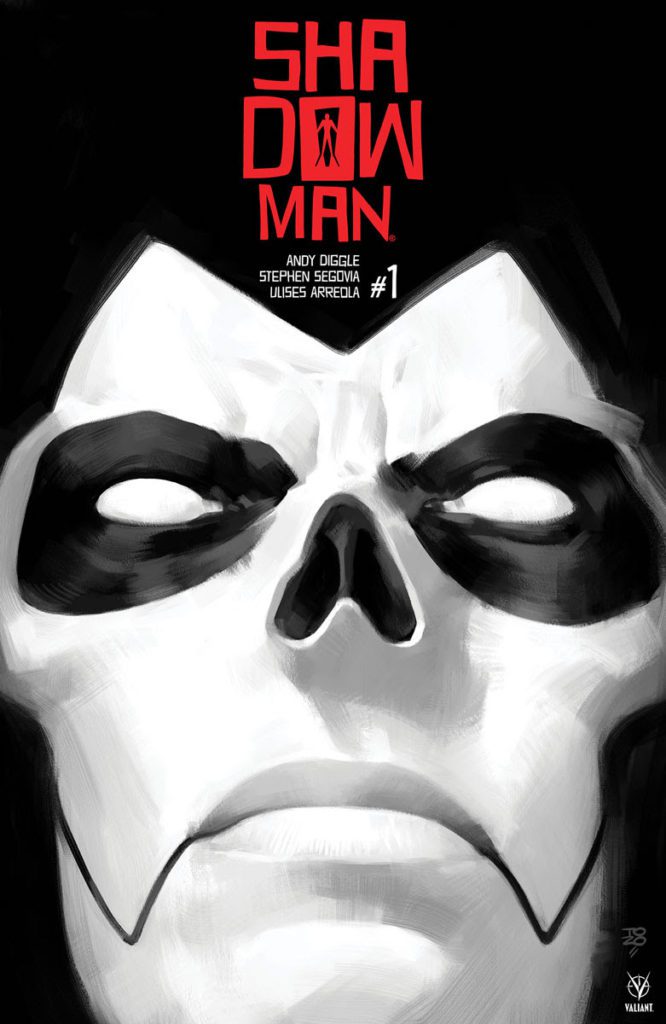 Valiant is proud to announce that SHADOWMAN (2018) #1 – the FIRST ISSUE of the POWERFUL NEW ONGOING SERIES from acclaimed writer Andy Diggle (Green Arrow: Year One, Daredevil) and high-octane artist Stephen Segovia (Action Comics) – has sold out at the distributor level and will return to store shelves everywhere with the SHADOWMAN #1 SECOND PRINTING on April 25th!

In the epic tradition of X-O MANOWAR and BLOODSHOT REBORN, a staggering new beginning for Valiant’s supernatural icon starts here with PART ONE of “FEAR OF THE DARK” – a tense and gripping three-issue introduction pushing Jack Boniface to the farthest edge of fear itself…and into a startling, adrenaline-fueled fight for survival as Shadowman takes command of the birthright he was born to uphold!

Don’t fear your demons… Fight them! Orphaned as a child and raised on the margins of society, Jack Boniface never knew his place in the world. Until he discovered it waiting for him…in a darkness far older than the reign of men…

Unbeknownst to him, Jack was fated to become the next in a long lineage of Shadowmen – mortals bound to violent voodoo spirits of immense power – that could safeguard our world against incursions from realms beyond. For years, he struggled to control the loa’s murderous urges – a battle he eventually lost.

But now, after years of self-imposed exile, the man once known as Shadowman is returning home to sharpen the weapon within…and unleash a reckoning on the evils of our world that will soon send shockwaves through heaven and hell alike…

On April 25th, find out why fans and critics hail SHADOWMAN #1 as a stunning return to form for the Valiant Universe’s most powerful paranormal protector:

“✮✮✮✮✮… Exploding with excitement… alluring and refreshing.” – Comics: The Gathering

“✮✮✮✮✮… [SHADOWMAN #1] breathes new life into a character bound to the land of the dead in this absorbing debut.” – All-Comic

“✮✮✮✮✮… This book is a thing of beauty to behold.” – Outright Geekery

“✮✮✮✮½… The tone is set for a new battle of good versus evil.”  – The Brazen Bull

“✮✮✮✮… A satisfying start to the new series.” – Geeked Out Nation

The Shadowman legacy takes on mythic new heights on April 25th, when “FEAR OF THE DARK” grips the Valiant Universe with SHADOWMAN (2018) #1…and launches the gruesome guardian of New Orleans into a fearsome new battle for the fate of our world!

Plus, in stores that same day: Jack Boniface’s quest to reclaim his unearthly inheritance charges onward in SHADOWMAN (2018) #2! On April 25th, Valiant’s most anticipated new series plunges even deeper into the darkest recesses of the Deadside to reveal the vengeful machinations of Baron Samedi…and reaffirm Jack Boniface’s rightful place as mankind’s last line of defense against the forces of death and damnation!

Jack Boniface has only just returned home to New Orleans…but the Deadside won’t let him stay gone! From across the veil of life and death, the malignant presence of Baron Samedi – a ravenous voodoo deity bent on consolidating power at all costs – now seeks to infiltrate the mortal plane and claim the legacy of Shadowman for himself! But even as Jack and Alyssa marshal a defense to Samedi’s inhuman agenda, a monstrous new force – driven by killer instinct and a rabid hatred of Shadowman – is about to turn the Big Easy’s back alleys into a hunting ground…