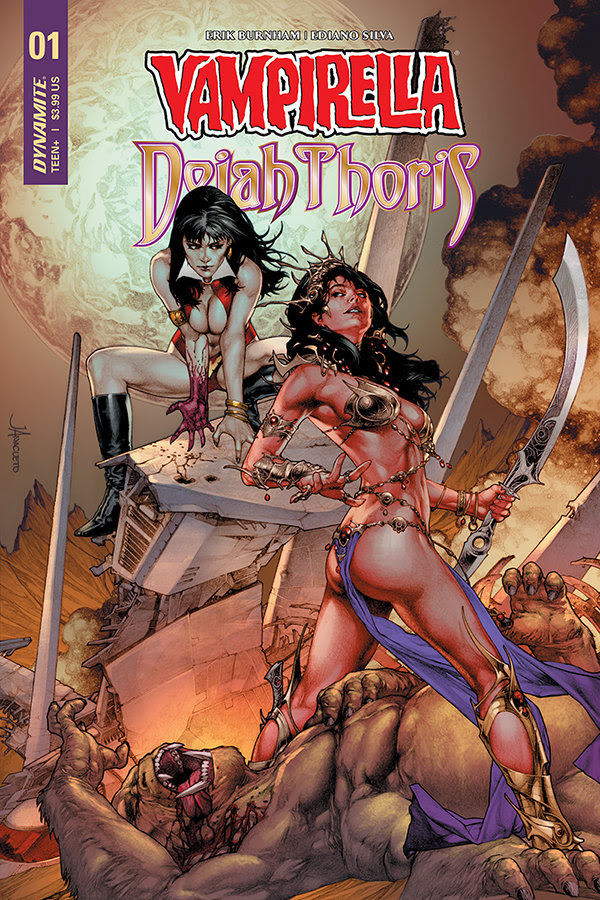 Dynamite Entertainment is set to deliver the latest in epic crossover events with Vampirella/Dejah Thoris! The pulp tale that was destined to happen was created by Erik Burnham (Ghostbusters, KISS: The Demon) and Ediano Silva (Pathfinder: Runescars, Killer Instinct) is headed to stands this September!

In Vampirella/Dejah Thoris, when an alien scout ship crashes on Mars, Dejah Thoris must risk reigniting war with the Green Martians and becoming dinner for the white apes.  But the stakes are raised so much higher when the ship is revealed to carry Vampirella, who is on a desperate mission of survival—one that might end before it truly begins!

“Not a lot of folks know this, but some of my earliest work in comics was an unpublished adaptation of A Princess of Mars… I discovered Barsoom and Dejah Thoris then, and I’m ecstatic to not only play in that sandbox again but also introduce the princess to Vampirella!” says writer Erik Burnham.

“There’s so much love for both of these iconic characters, we wanted to wait for the right time with the right creative team to see a crossover come to life,” said Nick Barrucci, CEO and Publisher of Dynamite Entertainment. “Dejah Thoris has been one of our strongest characters and matching her with everyone’s fan favorite, Vampirella, just seems like a match worthy of comic history!”

Created in 1969, Vampirella has thrived for nearly 50 years delivering classic tales of terror in comics, graphic novels, and magazines.  These cover images helped to define the horror comic genre with master illustrators like Frank Frazetta, Sanjulian, Bill Hughes, Jose Gonzalez, Enrich, Esteban Maroto, and Paul Gulacy, along with a host of other legendary contributing artists.

Edgar Rice Burroughs’ classic character, Dejah Thoris, the Princess of Mars, debuted in 1912, and ever since, science fiction and fantasy enthusiasts have dreamed of the faraway Red Planet and all of its wondrous sights and monstrous perils. A strong and talented royal, Dejah served as inspiration for such heroines such as Princess Leia of Star Wars and Neytiri of James Cameron’s Avatar. Since her comic book debut in 2010, she has constantly served as an adventurous mainstay at Dynamite.

A Blank Authentix Edition will be available as a variant for Vampirella/Dejah Thoris #1 featuring the same great story, but with a blank cover for fans to get their favorite artist to draw their version of Dejah, Vampi, of both. An Atlas Edition will also be available for fans wishing to have their issue signed by writer Erik Burnham.