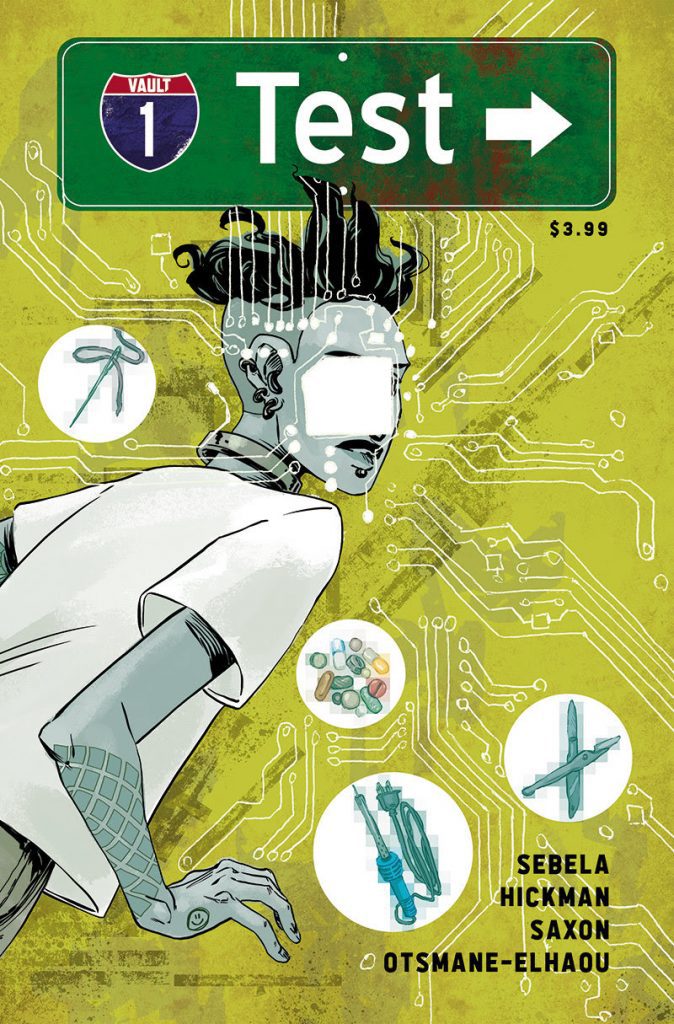 TEST follows Aleph Null, An orphan, a human guinea pig undergoing medical tests for cash, a bodyhacker, a hardcore future junkie, and a corporate asset. But now, Aleph is on the run from their old life, in search of a mythical, Midwestern town named Laurelwood—where they’re test-marketing the future with tech that can’t possibly exist yet, and won’t for decades.

Aleph Null is a lot of things: An orphan, a human guinea pig undergoing medical tests for cash, a bodyhacker, a hardcore future junkie, and a corporate asset. But now, Aleph is on the run from their old life, in search of a mythical, Midwestern town named Laurelwood—where they’re test-marketing the future with tech that can’t possibly exist yet, and won’t for decades.

From Eisner-nominated Chris Sebela (Crowded, High Crimes) and Jen Hickman (Moth & Whisper) comes the story of a town out of time, full of mysteries, and populated by guinea pigs in need of liberation by the misfit least likely to be their savior.

CHRIS SEBELA ON THE STORY BEHIND TEST:

“When I was working at a market research firm in my drifting 20s, the only writing I thought might come out of it was a bootleg nonfiction book about how crooked everyone on both sides of the two-way mirror was. I spent my short career there in a room full of dirtbags disguised as aspiring professionals, quietly encouraged to teach people on the other end of the phone to lie to fill up groups — with my boss’ drug dealer coming by to threaten him, and his boss constantly coming in and pretending she wasn’t hosting a weekly party of drug addicts and degenerates on the fanciest street in Chicago. It felt ripe for a story of some kind.

But the further I got from it, the more my memories changed focus. The things that came back to me were all the secret parts of that world. Clients camped out in viewing rooms with expensive buffets (we’d scavenge whatever was left behind) watching regular people sit around conference tables explaining how they felt about yogurt-covered pretzels or the first episode of a new TV show. The people around the table got $50+ per hour, our company got way more than that per hour, and the folks behind the glass made more than everyone combined per hour. Respondents would show up in wigs and with fake names, wanting to evade the rules, telling their friends about it, a whole underground network of people who went from one market research firm to another, making a tidy (untaxable) cash income. All of which was just a small corner of the ocean of marketing — whose depths shaped tv line-ups and swallowed entire towns in its pursuit to quantify capitalism into an easy formula of wants and needs.

The more I examined what drew me to certain ideas, it was as much the chance to see through a characters’ eyes as it was to get inside these secret societies and see what the world looks like from that side of the glass. Worlds within worlds, subcultures of industry where people speak a common shorthand and are united by the insularity of it all — out in public but still completely hidden at the same time.

That’s what Test Towns are in a nutshell — American cities chosen for their demographic perfections, where companies unleash questionable concepts like fast food nightmares and new unnecessary technology — products that live or die depending on how well they sell. Life in these cities goes on as normal, but out in plain view everyone is being studied for what they buy and what categories they slot into and valued for how the two intersect on some marketing exec’s powerpoint chart.

One pocket universe of marketers, professional guinea pigs, junkies, bodyhackers and others would give birth to another and they all began to converge in TEST. It became a playground where I could watch the fireworks when the future is unleashed on an unsuspecting present, and what happens when I drop someone like Aleph Null into the middle of a small midwestern town with viewing rooms behind every mirror, unheard of film franchises starring actors that haven’t been born yet, and a citizenry under siege by chemical NDAs and fifth columnists stuck in the middle of it all.

Back when I left that marketing job, I was grateful for the stories it had given me but I figured that I’d squeezed it for everything I could. It took a long time before it came back with one last story to tell, one that had everything and nothing to do with what I could remember of it. No matter what strange places inspiration wanders in from, I’ve learned to answer the door. Sometimes it’s the only way to exorcise what’s left of your ghosts and make room for some new ones.”