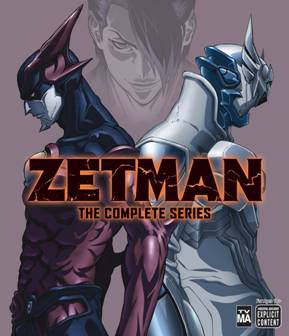 (San Francisco, CA) – VIZ Media, LLC (VIZ Media), the largest distributor and licensor of anime and manga in North America, expands its substantial anime catalog with the addition of the dark sci-fi action series ZETMAN on November 5th. The 13-episode series is rated ‘TV-MA’ for Mature Audiences and will be offered Uncut in DVD and Blu-ray editions. The DVD MSRP is $44.82 U.S. / $43.24 CAN and Blu-ray MSRP is $54.97 U.S. / $66.15 CAN.

ZETMAN is based on a popular manga (graphic novel) series by Masakazu Katsura, who also created VIDEO GIRL AI and I”S (both published in North America by VIZ Media) and was the character designer for the hit anime series, TIGER & BUNNY (also available on Blu-ray and DVD at North American retailers).

Jin and Kouga may come from very different walks of life, but both boys are searching for the real meaning of justice and what it means to be a hero! Jin may be poor, but he lives a happy life with his grandfather, until the day tragedy strikes and changes his life forever. Kouga, born into a wealthy family, is in line to inherit his family’s power and fortune. But what is true strength? What does it really mean to be human? Jin and Kouga’s fates intertwine in their struggle to harness the power that lies within each of them!

“ZETMAN delivers unique perspectives on being human and a hero and combines expressive characters and a thought-provoking story with plenty of uncut visceral action to make for a fast-paced and thrilling highlight of our winter anime release schedule,” says Charlene Ingram, Senior Marketing Manager, Animation. “With the start of the holiday season, the ZETMAN anime series also makes a cool gift for gritty action anime fans, and we look forward to fans catching all of the action with this new home video DVD and Blu-ray release.”

For more information on ZETMAN and other animated titles from VIZ Media please visit www.VIZAnime.com/zetman.