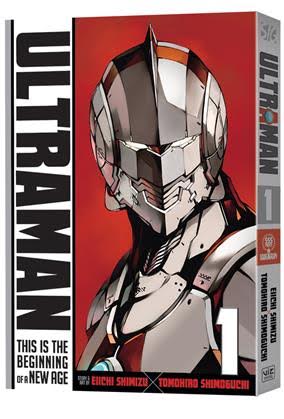 VIZ Media, LLC (VIZ Media), the largest publisher, distributor and licensor of manga and anime in North America, proudly presents the first-ever U.S. appearance by the creators of the new ULTRAMAN manga series at the 2015 Comic-Con International: San Diego.

Comic-Con International is one of the nation’s largest comic book, science fiction and pop culture events, and takes place July 8th-12th at the San Diego Convention Center, in San Diego, CA. VIZ Media will be located in Booth 2813. Complete details on Comic-Con are available at: www.comic-con.org.

Eiichi Shimizu and Tomohiro Shimoguchi created the new ULTRAMAN manga series, which is inspired by the original classic Japanese superhero TV show that ran in the late 1960s and remains hugely popular with audiences around the world. The series launches in print and digitally on August 18th under the VIZ Signature imprint. In Japan, the series currently appears in Hero’s magazine.

During Comic-Con, Eiichi Shimizu and Tomohiro Shimoguchi will participate in an informative panel discussion about the impact of Ultraman on pop culture. The pair will also host four different signing sessions at the VIZ Media booth. A special ULTRAMAN bundle will be available for purchase for $30.00 in the VIZ Media booth that includes an advance copy of ULTRAMAN Vol. 1 along with a collectable Ultraman figure from Japan.

“It is an honor to present the creators of this amazing new manga series at one of the largest pop culture events in the U.S. and we look forward to fans getting an up close and personal experience by attending our panel discussion and signing sessions,” says Michael Montesa, Editor. “Join us in San Diego as this updated classic Japanese sci-fi property prepares to thrill a whole new generation of manga readers.”

For their first international appearance, Eiichi Shimizu and Tomohiro Shimoguchi, creators of the new VIZ Media manga series ULTRAMAN – inspired by the original Japanese TV show – will be joined onstage by special guests from Legendary Comics to discuss Japan’s quintessential superhero and the influence of kaiju in today’s pop culture. Challenge them with questions, answer trivia and get a unique first look at this action-packed new series straight from Japan!

Meet the creators of the ULTRAMAN manga series in several personal appearances at the VIZ Media booth. Fans will be able to have them sign special advance copies of the series’ opening volume as well as the exclusive figure.

Decades ago, a being known as the Giant of Light joined Shin Hayata of the Scientific Special Search Party to save Earth from an invasion of terrifying monsters known as Kaiju. Now, many years later, those dark days are fading into memory, and the world is at peace. But in the shadows a new threat is growing, a danger that can only be faced by a new kind of hero – a new kind of ULTRAMAN… Shinjiro is an ordinary teenager, but his father is the legendary Shin Hayata. When he learns that his father passed on the “Ultraman Factor” to him, and that he possesses incredible powers, nothing will ever be the same again.

Eiichi Shimizu worked on the story, script and mechanical design for ULTRAMAN. Tomohiro Shimoguchi provided character design and art. Together, the two have formed a creative dream team to produce a number of works including ULTRAMAN (Hero’s) and Kurogane no Rainbareru (Linebarrels of Iron, Akita Shoten). In addition to comics, they have expanded their field of interest to include character designs for video games and action figures.