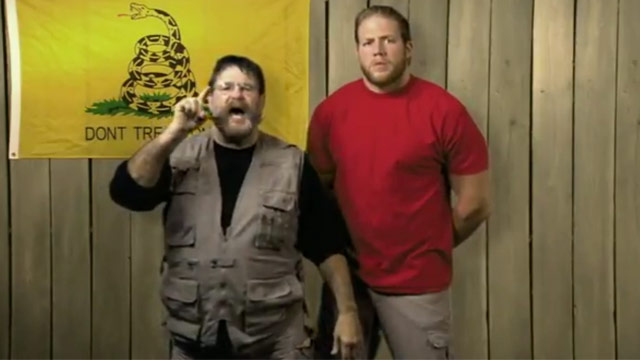 WE THE PEOPLE: Zeb Coulter and Jack Swagger Take Aim at Glenn Beck

When the WWE started this whole “Real American” gimmick with Jack Swagger and Zeb Coulter, they knew the controversy it would bring. This is nothing new: the WWE did this way back when with John Bradshaw Layfield, but the timing right now couldn’t be better for publicity. Last week, conservative personality and controversy magnet Glenn Beck decided to open his mouth about the storyline and utter the words “stupid wrestling people”, he had to know the backlash he would receive. What he got was a video answer by the two at the center of this all: Zeb Coulter and Jack Swagger.

Check out the video below that shows Zeb breaking character for a moment as he breaks down the WWE’s statistics, as well as takes aim at Beck for his outlandish remark. The way I see it, the WWE is doing what it has always done: provide ENTERTAINMENT for fans across the globe. Swagger and Coulter’s gimmicks are nothing new, but in a world where immigration is a hot button issue, the storyline picked up much more steam than some expected. The AP wires picked it up, CNN covered it: heck, on Saturday night, Jack Swagger was one of the most searched subjects on Yahoo.

Love them or hate they, they are entertaining as heck. Personally, I’m pulling for Swagger to capture the gold at Wrestlemania: he’s a great wrestler that has been overlooked for far too long. And yes, I know about his recent arrest, but if we are going that route, how many other WWE stars have failed drug tests repeatedly and been arrested for the same, if not worst?

What do you think of all this?

3 thoughts on “WE THE PEOPLE: Zeb Coulter and Jack Swagger Take Aim at Glenn Beck”