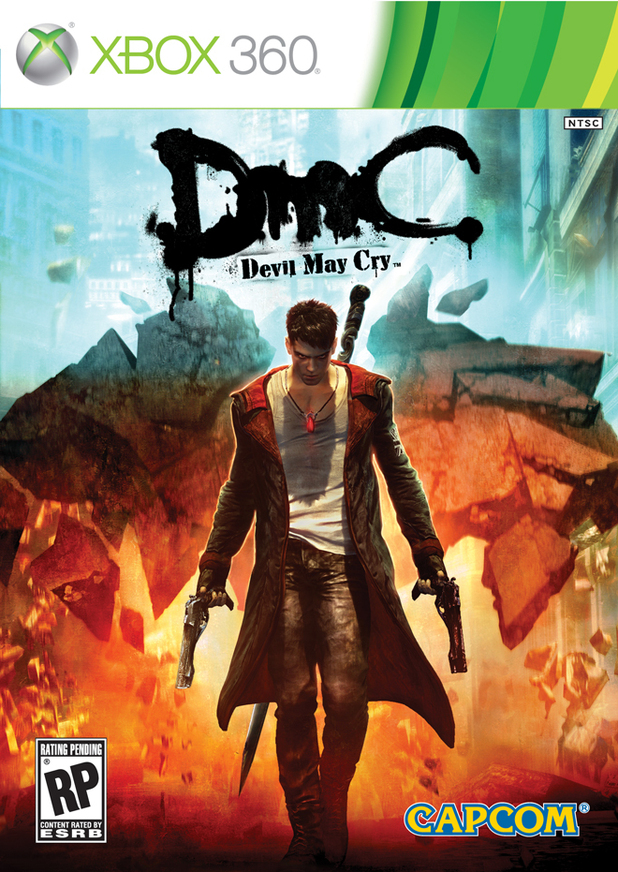 In 2001, the gaming world was introduced to a game that literally bursts with style: Devil May Cry. The adventures of the red clad demon hunter Dante wowed fans for four games, but by the forth game the formula had become a bit tiresome. Capcom, the publisher of the four original titles, felt a change was needed for the Japanese born franchise, a change that would reflect more of a westernized perspective. That is how we have the latest in the franchise, the reboot of Devil May Cry: DMC.

The Good: So, DMC is the new Devil May Cry, but what is so different about it? The part that got many diehard fans in an uproar was the redesign of the hero of the game, Dante. Known for his long flowing red coat and short white hair, his look this time around is a complete departure. Gone are Dante’s classic white locks, now replaced with an even shorter, black crop. The red coat? Gone as well in favor of a more realistic black coat with red highlights. The object of the redesign was to make the game have an edgier, realer look: after playing the game for a bit, it’s hard to see reality in any of it, but I get what the developers were trying for.

The aspect of the Devil May Cry franchise that is most loved by the fans has to be the fast paced action system, and new developer Ninja Theory didn’t miss a beat in that regard.  The action, which can be dished out with Dante’s trademark weaponry including his sword, his dueling pistols, is fast paced and very much rooted in the stylish combo system the franchise is known for. New demon and angel weapons are added to the fray, which give nods to some of the weapons from the past games in the series as well.

In this new reboot, the player fills the shoes of Dante once again: a younger, more rebellious Dante who gets literally sucked into limbo to do battle with demons who want nothing more than to see him dead. Aided by a mysterious woman, Kat, as well as by a very familiar face to the franchise, Dante begins to remember who and what he is, and what exactly happened to his family. A very fresh, intriguing take on Dante’s saga, the game should quiet many naysayers after a few hours of gameplay.

The Bad: The game looks fantastic, with both the “real” world and Limbo having very distinct, detailed atmospheres to explore. If there were a bad part to this game, I would have to place it on the lack of interesting opponents. The original series was known for its memorable foes: even the marionettes, which were a synch to destroy, had a very slick look to them. Many of the foes you face throughout the game begin to feel like one and other, as only very few do anything to set themselves apart from the demonic crowd.

The Verdict: I was very worried about this reboot, as I am one of the fans who was very displeased about how the reboot was shaping up. Having played the game, I can say my fears have been put to rest. Ninja Theory and Capcom have created an amazing way to reboot the beloved franchise, and surprisingly, they did it with the same high octane, demon slaying actions fans have been clamoring for. I can’t wait to see where Capcom takes us next in this new world of DMC. Highly Recommended, I give DMC Devil May Cry a @@@@ out of FIVE.