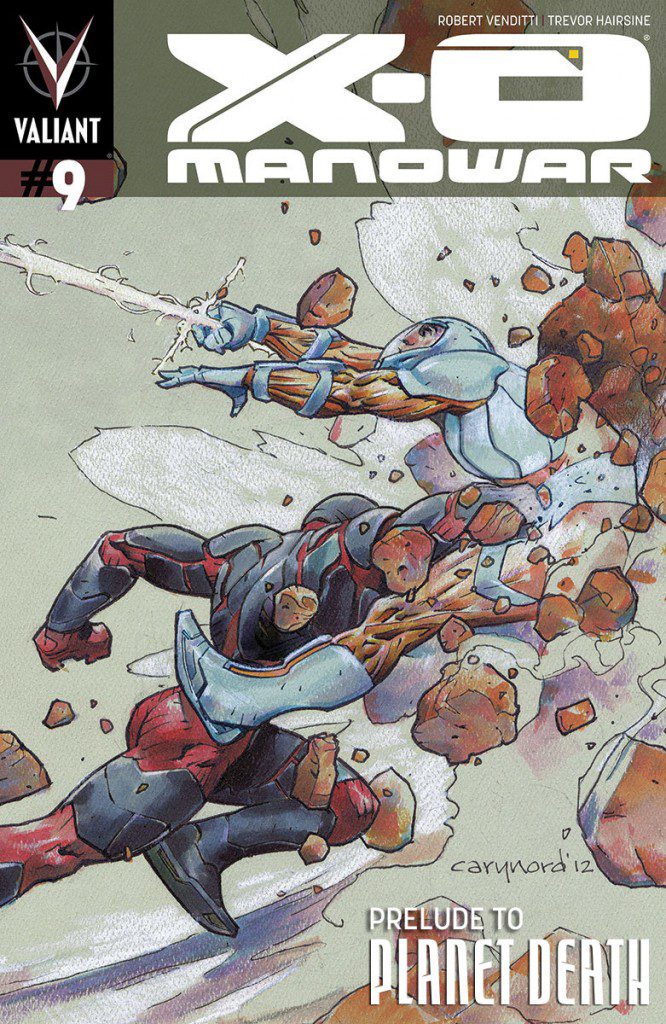 Are you ready for a throw down?

Valiant Entertainment announced what arc will lead the armored warrior in to 2013, and it’s Planet Death. Aric will lead a one man army into the heart of The Vine in order to stop an invasion on Earth. Check out the official word from Valiant, as well as the cover and variant cover for issue #9, which kicks off the storyline.

Valiant is proud to announce Planet Death — a six-part blockbuster that will see X-O Manowar attempt to save Earth from an alien onslaught by mounting a one-man invasion of The Vine homeworld!

The Vine armada has arrived on Earth and they’ve brought with them something far more terrible than any war machine. Forced into battle against the most horrifying opponent he’s ever faced, Aric of Dacia will unleash the ultimate sanction against a foe torn from his own past — and, soon, he will commence one, final act of revenge. Using their own perfect weapon, X-O Manowar will invade The Vine’s homeworld and, just as his Visigoth forefathers sacked Rome before him, he will not stop until the capital of their interstellar empire has become a planet of death.

“Planet Death is a story that we’ve been building toward over the course of the entire series, and the threads of it go all the way back to X-O Manowar #1,” said series author Robert Venditti. “At his core, Aric of Dacia is a warrior, and, as his conquest of Planet Death begins, we will see him leverage the skills that he knows best — leadership, open warfare, and the all-out brutalism of the battlefield.”

“Aric was content to let sleeping dogs lie, but when everything he knew about his past is shattered in a moment, he’s driven to one conclusion – he must take the fight to the Vine and wipe them out at the source,” added Valiant Executive Editor Warren Simons.

Aric’s galaxy-spanning quest for vengeance takes root this January with Prelude to Planet Death — Part 1 (of 2) in X-O Manowar #9 — featuring covers by superstar artists Trevor Hairsine, Cary Nord and Clayton Crain! And to get more exclusive info on Planet Death and where the Valiant Universe is headed in 2013, check out “The Future of Valiant” Panel this Friday at New York Comic-Con at 2:45 pm for an exclusive look at what happens next!